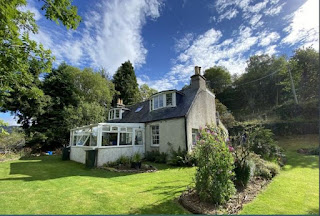 At least I think this is the house where she and her husband, Basil, lived for many years at Strone, high up and overlooking Urquhart Bay. Winifred Cary was one of those colourful characters that made up the rich tapestry of Loch Ness Monster personalities during the 1960s and 1970s. I wrote a biopic of Winifred and her many monster sightings back in 2020 and she was one of those people who had one foot in the psychic and paranormal world when one considers the story of the monster.

The three bedroom property and converted barn are available for offers over £385,000. The property can be viewed at the estate agent's website. Her house hosted many a Nessie hunter over the years and one in particular was Ted Holiday who alleged a supernatural encounter in her house and then a curious encounter with a person dubbed today as a Man In Black. I covered that one back in 2011.  But one room pictured below from the sale website that interested me most was the sun lounge, for it is here that I think an extraordinary incident occurred as related by Ted Holiday in his book. "The Goblin Universe":

At that precise moment there was a tremendous rushing sound like a tornado outside the window, and the garden seemed to be filled with indefinable frantic movement. A series of violent thuds sounded as if from a heavy object striking either the wall or the sun-lounge door. Through the window behind Mrs. Cary I suddenly saw what looked like a pyramid-shaped column of blackish smoke about eight feet high revolving in a frenzy. Part of it was involved in a rosebush, which looked as if it were being ripped out of the ground. Mrs. Cary shrieked and turned her face to the window. The episode lasted 10 or 15 seconds, and then was instantly finished. I still sat there, staring at the window, feeling alarmed and rather peculiar. Basil, who was preparing his drink, had heard nothing and he turned in amazement when his wife screamed. Dutifully he searched the garden but found it silent and quite normal. 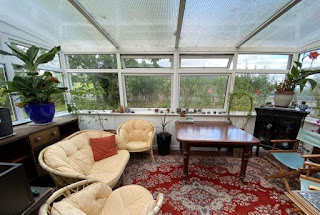 Paranormal incident or freak weather event? If you don't place much credibility in those things, at least it has a great view of the loch. Place your bids! 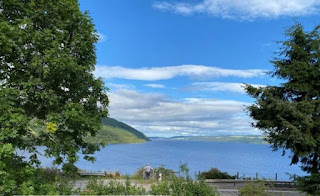