It is back to this blog's occasional series on land sightings and there is one interesting aspect to the Loch Ness Monster on land and that is its role as hunter. Of the thirty five alleged land cases I know about, three are reported with an indication of prey being carried away.

Now sightings of a large creature in Loch Ness are interesting, stories of this monster lumbering about on land are even more fascinating. But stories of the monster helping itself to cows, sheep, deer and other animals around the loch boggles the mind and may make some a bit wary of  wild camping along secluded parts of the shore! Critics have often complained there are not enough fish in the loch to sustain a group of large predators, but what about on land? It is now time to indulge in some wild speculation!


The first case of these three is the famous story of the Spicers, though the suggestion of predation here is not so clear. George Spicer had reported seeing something like a lamb on the back of the creature but this was transformed into a tale of the monster carrying off a lamb in its mouth. However, the Spicers had never claimed to have seen the head of the creature. The picture below by the talented Gino D'Achille sums up how the media culture overlaid this sighting into a story of a prehistoric monster carrying off some hapless livestock.


As an aside, I remembered this painting from a book I owned in my youth and it was only a few days ago that I found the book in a charity shop in Edinburgh for a couple of quid. It was Mysterious Monsters by Daniel Farson for those who collect these things. 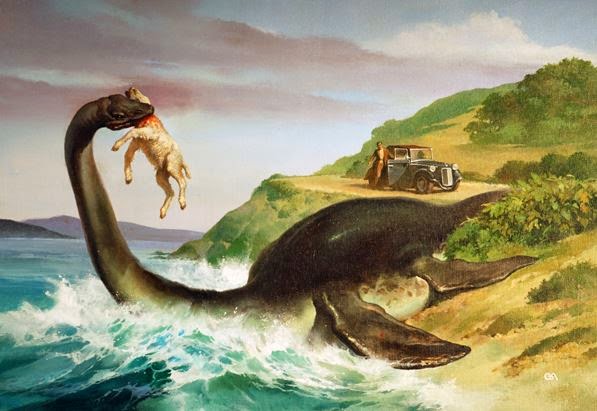 The second such story is attributed to a Mrs. Eleanor Price-Hughes in 1933. The oldest source for this story comes from sea serpent researcher Oudemans in 1934 who wrote an article on the Loch Ness Monster with these words roughly translated from the Dutch:

Her husband saw it, coming from a thicket at Drumnadrochit and disappear into the loch, with what appeared to be a baby in its mouth; are not baby seals pinkish?

Commander Gould wrote to me, dated 5th June 1934 thinking it was a mere hoax. On what grounds? Because he believes that the Loch Ness creature is like a giant salamander. This "flesh-colored baby" was probably a big .... ?


The last word is lost on my copy, so could be anything that lives by the loch side (certainly not baby seals). So it was not Mrs. Price Hughes, but her husband who allegedly witnessed this event. I suspect the original source for this story lies in an article or letter written to an English newspaper at the time. It appears that Oudemans accepted this report but Gould did not.

Since the loch is not visible from Drumnadrochit, this story is more likely to have taken place around the rivers feeding into Urquhart Bay just beyond the village. I have scouted around this area several times which is the location for several land sightings. There are pathways winding around the area, though other parts need a bit of an effort to get to.

Of course, the mention of the emotive words "baby in its mouth" may well have motivated Gould to have pronounced this a hoax. Portraying the Loch Ness Monster as a man-eater excites the imagination, but would it do much good for tourism or credible research?

One sceptic suggested this story may have been a seal with a pink salmon in its mouth or a cow with its pink tongue hanging out. However, the credibility of these suggestions is predicated on the witness catching only the briefest and inconclusive of glimpses of the creature. The text of the report suggests otherwise. The creature was seen to emerge from a thicket and disappear into the loch. Clearly, it would help to see the original account, before forming a better judgement.


The third account is similar to the Price-Hughes story. The story is found in Paul Harrison's "The Encyclopedia of the Loch Ness Monster" and though he does not state the source, it seems clear it was a local newspaper report. An anonymous witness described as a "very trustworthy man" was driving north of Foyers at about 5:30 in the morning of 15th May 1971. It is then stated that he saw a large grey animal appear from the woods to his left dragging itself into the loch. In its mouth were parts of an animal, possibly a cow. It was described as lizard like, 30 foot long and 6 foot tall with an oily sheen on its skin.

Sunrise is at about 5am at that time of year and the driver must have been driving south for the creature to appear from his left. I have no idea what kind of livestock grazed around that area in 1971, but if this story was true, it could equally be a deer.

So that is it, three reports or more likely two mentioning a Loch Ness Monster as a land hunter. It is not much to go on, but are they indicative of a behavioural pattern of the creature that is barely known?

First it has to be said that aquatic creatures hunting land based creatures is no big deal. The YouTube clip below of crocodiles taking out gazelles will be familiar to watchers of wildlife documentaries.

Looking more closely at flipper-based creatures, who can forget the spectacular shots of killer whales driving themselves onto land to capture seals?

On a more sedate level but perhaps more relevant is this intriguing clip of catfish sneaking up on pigeons for an unexpected meal.

No doubt there are other examples, but I think I have got the point across that certain species of water based animals are not limited to what they can find in the water to survive. But how relevant is this to the Loch Ness Monster?

Clearly, there are no reports of any such displays of predation at the loch shoreline. The stories we have here are of the beast moving inland to seek out prey whilst these clips have the predator staying within its preferred domain.

If there is anything to this aspect of the Loch Ness Monster, then it has to be a behavioural trait that occurs at night time. I have already stated my belief elsewhere that Nessie is largely a creature of the dark.  This is borne out by the fact that a higher proportion of land sightings occur in hours of darkness.

But the question has to be asked why the Loch Ness Monster would take to land at all? What motivates any creature to behave in certain ways? Since animals are primarily driven by the instinct to survive, I would suggest this boils down to the matter of food. The other factor is reproduction, but I see that as a less likely candidate here. In other words, it is not just these two or three stories about the monster with food in its mouth that are relevant, the whole genre of land sightings has "food" written all over it.

Now the first thing to dismiss here is the idea of Nessie chasing cows and sheep around the fields of Loch Ness. It is just not on when you consider the nature of the beast. The motion of the creature on land is described variously as waddling, lumbering and jerking. I suspect even a pregnant cow could easily evade a land bound Nessie.

No, the modus operandi must function along the lines of the animals mentioned above. Just as  crocodiles, orcas and catfish cannot pursue gazelles, seals or pigeons on land, neither can the Loch Ness Monster. Our little gedankenexperiment must also embrace the concept of the ambush.

The ambush can operate in two domains, at the shoreline, like other aquatic predators, or further inland. In both cases, our dark skinned creature lies inert in the darkness waiting for its quarry. At the shoreline, it lies in the shallows as deer come to the loch to drink. Inland, it lies amongst the trees, indistinguishable from the rocks around it.

In this imagined scenario, the long neck of the beast comes into its own. The deer approaches the peat stained waters seeking to slake its thirst. Unaware of the dark mass about six feet away, it is suddenly seized in the leg by a long, sleek neck that thrusts from that black lump. The last thing the deer sees are the receding trees as it is dragged into the loch to a watery death. The ancient Kelpie legend of victims being taken into the loch takes on a new meaning.

The inland version of this is similar in its execution, though since more energy and risk is required in this venture, it makes it seems a less likely episode to me. Not impossible, just less likelier than staying at the shoreline waiting for the victims to arrive. Having said that, the night time hunt by the shore is less likely to be observed by potential witnesses from the road.

As I said, it is speculation, but if there is a Loch Ness Monster, it is a possible one. How much food could land based creatures provide for a monster diet? I cannot say, but an entire deer is a major meal, more than a goodly number of fish.

And what does this mean in practise for the seasoned monster hunter? The frequency of land sightings is down over the decades. Increased fencing, thicker foliage and noisier roads all act as deterrents. But I already have my night vision equipment, I just need to stake out the appropriate beach at the dead of night. Just be wary of those dark rocks which don't quite look right .....