Joaquin is one of this blog's regulars, but he also likes to keep an eye on the loch via the webcam run by Mikko Takala at this link. I have had a few pictures sent to me by such users over the years and some have certainly looked interesting. More often than not, it is a case of selecting from a range of objects that are not necessarily monster. That is mainly down to the fact that the webcam must be at least 200 metres from the loch and too far for game changing pictures.

So, Joaquin has two snapshots he sent me. The first he took on January the 5th this year. The object did not appear on the next snapshot which would have been about 15 seconds later. The task is to identify the crescent like object just right of centre. Joaquin added some geometry based on a later picture of a Caley Cruiser to estimate the size of the object which he thinks is about 1.7m long and 0.5m high. I have not attempted to verify these estimates. 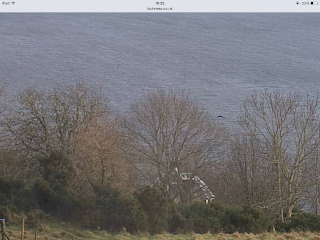 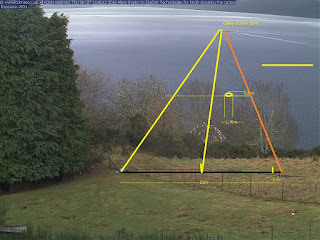 The second picture was taken about a week ago and shows a more blunted type of object protruding from the water just above the bottom right of the picture. It's doesn't look like a wave and not a log as it again disappeared on the next webcam refresh. Using another snap of a passing boat, Joachin estimates the object is half a metre wide and high. 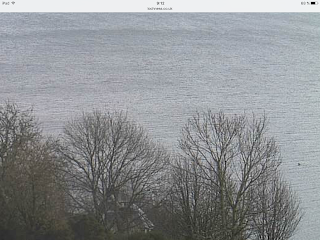 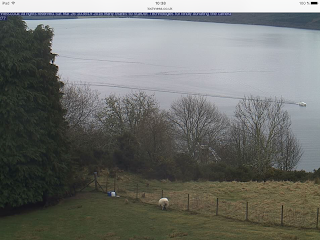 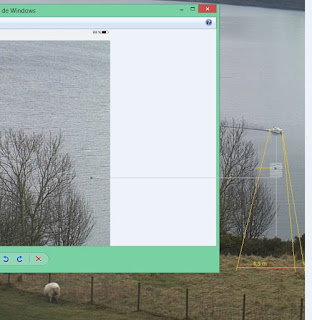 I must admit it looked like a dorsal fin on first appearances, but we covered that argument in the recent F.C.Adams photo article. Readers are invited to suggest explanations and they don't have to be Nessies!

As part of this mini series on Frank Searle, there is one final question. Is there any side to the story of Frank Searle that is redeemable? If you felt his fist, were on the receiving end of his tongue, were duped by his fake photos or witnessed daubed castle walls and petrol soaked beaches, then it is unlikely that your mindset is going to be graciously inclined towards him in any way.

What we know of him in writing is mainly from 1976 onward and by then the battle lines had been drawn between him and his perceived enemies. By then, the man Frank Searle was increasingly consumed by persons and events on the other side of the loch and became a man who spoke and acted through those red tinted glasses.

But when and how did it go wrong? Even those who hate him or hold him in contempt, will admit that the Frank Searle who turned up at Loch Ness on the 16th June 1969 was at best a different person or at worst had a different attitude. Indeed, Frank Searle goes further back than that as his autobiography tells us he annually took camping holidays from 1958 onward after being inspired by Constance Whyte's "More Than A Legend". Indeed, his first claimed sighting was of a single hump during such a trip in June 1965.

I, myself, find it unlikely that this Frank Searle arrived at Dores Bay with the intention of punching other researchers or churning out a series of fake photographs. Like Tim Dinsdale and Ted Holiday before him, it is likely his intention was to watch the loch and get that photograph of the Loch Ness Monster that would convince the world there was a case to answer.

Searle got his first published photo on June 27th 1972 (though he claimed to have got his first photo on November 10th 1971). That is shown below on this contemporary newspaper article. Assuming this is as fake as his other pictures, we could say this marks the beginning of the hoaxing period for Frank Searle. But what had happened in the previous three years? 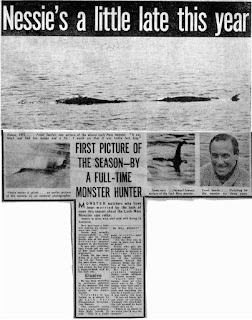 Of course, one may conclude nothing happened for three years, much to Frank Searle's frustration and his eventual decision to "create" his own evidence. However, if you believe there is one or more large creatures in Loch Ness and you have a man initially and sincerely watching the loch for long hours for at least three years, there is a good chance he saw something.

What that could be is difficult to tell and perhaps Paul Harrison's upcoming book will reveal a more conciliatory Frank Searle who owns up but also tells us what he really saw out on the loch over 13 years. One thing is for sure, the seventeen sightings claimed by Frank Searle over three years in the article above is somewhat excessive, shall we say.

Finally, one point of debate concerns Frank's first photo shown above. This was originally pointed out by Jay Cooney on his Bizarre Zoology blog in 2013. It concerns an article on the Loch Ness Monster from the Illustrated London News of 13th January 1934. That article was a compilation of drawings made by an artist of various Nessie sightings up to that time.

The one of interest was seen by a Nora Simpson which I have scanned from my own copy of the magazine for a comparison with Searle's first photograph. There is more than a passing resemblance between the photo and illustration which raises several speculations. In both cases, we have the two humps, the suggestion of a tail at the right and at the front something smaller.

The first speculation would be a sceptical interpretation that Searle copied the drawing for his photo. That is, of course, possible, though Searle would have been nine or ten years old when the 1934 article was published. A search of the various books and magazines I have published up to 1972 do not reproduce this drawing for an adult Frank Searle to see. That does not mean that the article was never republished, time will tell.

The other option is that it is just coincidence, the other is that both drawing and photo represent a living creature in Loch Ness. I am taking no position on that particular point of conversation and merely throw it out as a conversational item.

By the way, the Illustrated London News has a very nice painting of the B.A.Russell sighting from 1933, worth framing if you can get a hi-res copy. 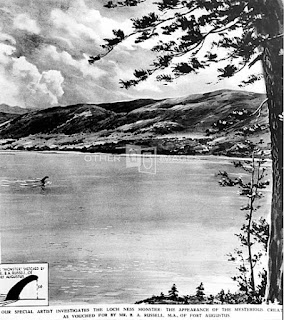