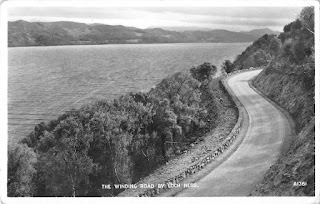 I have to say that Arthur Grant is one of my favourite accounts of the Loch Ness Monster. A giant creature lurching across a lonely road under a full moon before a befuddled motor cyclist? What's not to like? Of course, the dramatic story line makes some think it is just that - a made up story. I cover this account in my book, When Monsters Come Ashore, and will no more than quickly reproduce some words from the time to bring you up to speed. The event happened in the early hours of the 5th January 1934.

"It was," said Mr. Grant, "a bright moonlight night after rain had fallen. When almost forty yards away under the shadow of the hills, a short distance from the part of the reconstructed Glasgow-Inverness road near Abriachan, I observed what appeared to be a large black object on the opposite side of the road. I was almost on it when it turned what I thought was a small head on a long neck, and the creature, apparently taking fright, made two great bounds  across the road and plunged into the loch.

"I had a splendid view of the object; in fact, I almost struck it with my motor cycle. It had a long neck with an eel-like head and large oval-shaped eyes, just on the top of the small head. The body was very hefty, and I distinctly saw two front flippers. There were other two flippers, which seemed to be webbed behind, and there was a tail, which I estimate would be from five to six feet long. The curious thing about the tail was that it did not, so far as I could see, come to a point, but was rounded off. The total length of the animal would be from 15 to 20 feet.

"Knowing something about natural history, I can say that I have never seen anything in my life like the animal I saw. It looked like a hybrid.

"I jumped off my cycle," said Mr. Grant, "but the animal with great speed had rushed into the loch, splashing the surface violently and making away." 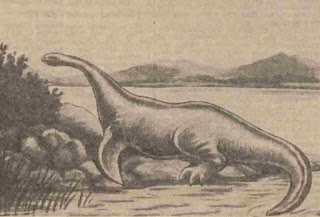 Having written the chapter on this event, it is never wise to close the book as things always turn up for further discussion and insight. For example, news of a three toed cast found back then came to light after I wrote the book (see link). Today, the focus is on addressing another attempt to discredit this account by sceptics. In this case, pictures of the then newly developed Glasgow to Inverness have been posted with what is claimed to be an important feature - walls. One is shown at the top and another below and they were part of the completed construction of the new road running for miles. 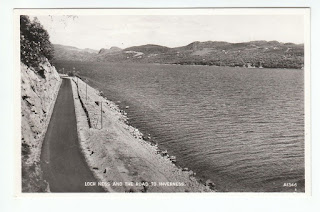 If you wonder what walls have to do with this case, then the implication is that if there was a wall in front of the alleged Nessie, it would not have got over it. Ergo, Grant lied and the sceptics can remove another famous case from their hit list (though I suspect they think they have done that already). Now by my estimate, these walls could be up to two or three feet high as they seem to vary. It is not clear if there was a consistent height depending on the situation or risk at that point by the shoreline. One can still see them today in various states, some missing stones or covered in vegetation and so on.

The first question to ask is whether our creature could hurdle such an obstacle? That depends entirely on what kind of species the animal is and so we could go off in different directions speculating on our own favoured beast. Could a mammal such as a long necked version of a seal get over such a wall? I would say yes going by this video clip of a much smaller seal negotiating an imposing rock of similar height to the walls by Loch Ness. One would think a larger pinniped would have less trouble getting over.

Could a plesiosaur negotiate it? Now you're asking a question. Are you talking about the ones preserved in the fossil record or the evolved one popular in the 1970s? When a plesiosaur is proposed to have evolved, there is no end to the adaptive qualities one may add to achieve ones ends. Well, I see no reason why it couldn't, but I am not being authoritative on that matter. And so we may go through the list of candidates.

But one may cut through this and say if the creature managed to get out of the loch, get on to the road and over it then surely it can retrace its route in reverse with similar skill? One can see the logic there, though another may retort that it may have disembarked at an easier point further away. Such is the cut and thrust when information is lacking. But another observation may come to our aid. As explained in my book, the location of the Arthur Grant encounter is almost certainly along the stretch of road now occupied by the Clansman Hotel. The Google image below shows the hotel and note the green Nessie statue to the left conveniently reminding us of the event nearly ninety years before.

A look around shows a lack of walls such as this shot where the only visible wall bridges over a stream. Obviously, the metal barriers are a modern addition. The second image is looking the opposite direction towards the south and you can see the entrance to the pier where various vessels such as the Jacobite tourist cruisers pick up passengers. One would surmise that a brick wall is less likely to be found at a pier as it would hinder access for vehicles and if a boat had to be towed onto land. 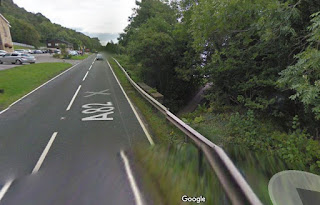 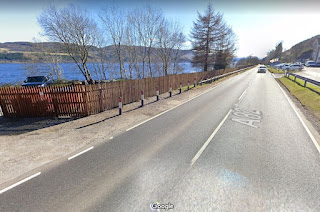 A look at contemporary ordnance survey maps may help us here. The first is the one inch per mile (1:63360) "Popular" edition published from 1921-1930. You can see the pier clearly marked and note that the red road is delineated by either solid black line or dotted black line. According to the symbols of the time, the solid line with a red road indicates a main route between towns but if it changes to dotted line then it is an unfenced boundary. The road goes from solid to dotted as the pier approaches and for a distance after before going solid again. We can take it that this means any wall disappears to accommodate access to the pier. This stretch of unfenced boundary is where I think Grant encountered his monster. 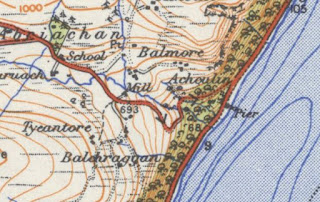 However, this map was published in 1929 and Grant himself refers to the reconstructed road in the account above five years later. Did that result in a wall being constructed near the pier? A look at another map from 1940 says not. It is a military map at at scale of 1:25000 and the broken/unbroken lines follow much the same pattern. So no wall along the shore and I think we can dispose of this sceptical objection. 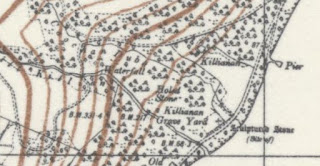 Of course, other objections to the Arthur Grant land sighting have been made over the years. The arrival of Marmaduke Wetherell at the scene gave sceptics the opportunity to play the guilt by association card. However, an expedition led by Mr. A. F. Hay, a Fellow of the Zoological Society of Scotland, visited the site and their report was published by the Scotsman newspaper. They had examined the road and beach and proposed a walrus was the best candidate. Curiously, they did not mention anything about walls getting in the way and I have no reason to doubt this was because there was no wall there.