Back at Loch Ness 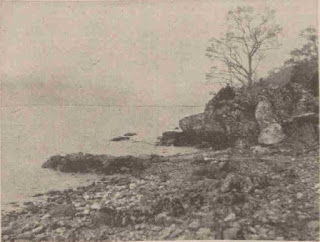 I have arrived at Loch Ness for a few days camping and once again seek a sight and perhaps a picture of its most elusive inhabitant, the Loch Ness Monster. I will be at Loch Ness Shores campsite at Foyers through to Sunday if anyone cares to drop in for a chat (probably evening is best). With the death of my father on Monday, the trip was ready to be shelved as funeral arrangements proceeded, but a delay has allowed the trip to proceed and provide some relief from such events.

So here we are and you may wonder what the photograph above depicts. It is from the Aberdeen Press and Journal from the 26th December 1933 and a caption below it reads:

The beach of Loch Ness near Foyers where the spoor of the "monster" is alleged to have been found.

Given the date and the incident, you would correctly guess that this refers to the infamous Marmaduke Wetherell monster tracks which turned out to be no more than the footprints of a Hippopotamus foot attached to an ashtray or some other artefact.

The question is how far is this location from the campsite I currently type this from? Doubtless the area has changed in appearance in the last 83 years, so is the photo of any use in locating that noted beach? An article of the time said the beach was difficult to gain access to which suggests to me it may be to the south of the spot where Hugh Gray took his picture of the beast.

Or perhaps it is located nearer to the place where Peter O'Connor took his snap? If the picture looks familiar to any local reader, send me a line. Otherwise, I will root around in the vain hope that the contours of 1933 line up with those of 2017!