An Article on Sandy and Hugh Gray 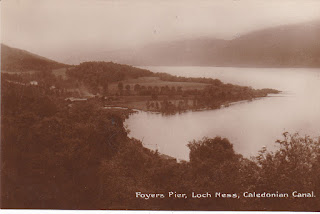 Nessie enthusiasts will know about the first photograph of the Loch Ness Monster taken by Hugh Gray in November 1933. This blog has also covered the sightings claimed by his brother, Sandy Gray. But a fuller account of Sandy Gray and events mainly around the Foyers area of Loch Ness has been written by journalist and author, Paul Brown.

I helped Paul with a few questions regarding his article and I commend his article to readers interested in Sandy Gray and various events that surrounded Loch Ness in those late months of 1933. You can access his article here. There you can also find a "Listen" button if you prefer audio. 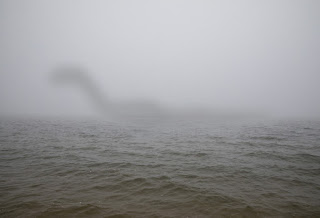 I received an email some days back from a Pete Sylvester who had a tale to tell from nearly forty years ago. He was helping out with a school trip to Loch Ness and was aged thirty nine back then. He recorded the details of the event at the time and so it come to us with a recall much better than perhaps something retold from memory four decades on. I quote his story in full.

We were a school party of fifteen to sixteen year old pupils finishing our Natural History Projects on heather, bugs, insects and - oh yes - water voles - though our experience of these was restricted to slides. Fifteen of our seventeen had gone to a nearby village (and as rough young teenagers God knows what they could be up to). So Dave Simpson and I (he the Biology teacher - me the helpful other) and the two remaining lads - were travelling along the road - in sight of the Loch - looking for our missing pupils. Dave was driving us in the minibus - a task he cordially hated. As always he was driving astride the central white line when - on an instant - he screamed to a halt.

We immediately turned our eyes this way and that. Had Dave hit a cow? (Surely we'd have felt it). Forced another car into the ditch? (No sound and looking back we could see no car). Hit a walker? (aaarrrggghhh!) Or maybe seen a watervole (no - don't be silly). Meanwhile - in the middle of the road - he was gazing with rapt attention at the Loch. Now the Loch was a hundred feet below us and perhaps three hundred yards away but Dave was looking way out across the water to the other side. The distance was at least a mile. But what he saw - when we focused on it - we saw too! A visible V wave - nothing at the point - was weaving along the Loch on the far side.

We watched for a couple of minutes and then it vanished. "What on earth was that?" asked Dave. "Sir - I bet it was the Loch Ness Monster," said one of the lads and to my surprise Dave replied "I don't know - but it could have been." Hmm - daft sod! We were about to clamber back aboard the minibus when the other lad cried out excitedly "There it is again, sir - in the middle!" We looked where he pointed and sure enough something the size of a football was making a V wave towards us. What it was I couldn't see - but the light was clear enough for me to identify boats and even birds on the far Loch's side. We watched as it came nearer - nothing stirred and not a sound could be heard. Then suddenly a cow bellowed. At least that is what I took it to be - but nevertheless we all jumped!

"Ok - let's get back in the bus," said Dave - but at that moment I had a better idea - and though we were a hundred feet above the Loch and three hundred yards from the water's edge - I shouted "Come with me!" And leapt over the stone wall. When they saw what I landed in - they remained on the tarmac. It was a bog. I sank to my ankles in the mud and having got wetter than a porter's pint - and seeing no easy way to return - I ploughed on. Getting more determined and wetter I continued on my unfortunate descent to the Loch. it was a slow journey!

And about half way down I had a sudden decision to make. As I drew towards the Loch I got lower and the trees on the water's edge got taller. What should I do? Staying where I was I was one hundred yards from the water and whatever was approaching I couldn't properly observe - yet if I descended then for perhaps a minute I would lose sight of it and it might vanish!

After a moment I thought - it had crossed the Loch for some five minutes - what the hell - I'd trust it to be there for another sixty seconds. So I went on. At last and I was on the shore - and to my surprise there was a slight water mist over the Loch - just enough to make what I was looking at not quite as clear as it should be - but it was obviously large and approaching fairly rapidly. Without thinking I waded into the Loch - water sloshing over my boots. I was truly excited and wanted IT to come nearer. What was coming I couldn't tell - but it was emerging and I knew it could be the .......

Then - at a distance of perhaps sixty yards - a motorboat started up and the object simply turned and sped away. I assumed the two things were one and the same. I was furious! It had been bloody motor boat! And I had travelled down three hundred yards of soaking bog! Idiot! I got on to dry land and looked back - already knowing what I had seen I gave it little more than a brief, disgusted glance and turned away. I trudged wearily back up the hill to the minibus.

"Rotten blooming motorboat!" I intoned - curbing the language I would have liked to use if the youngsters hadn't been there. "Yes" they all said. "it scared the monster off!" "Don't be silly" I snapped "That was the motorboat!" Dave put a restraining hand on my shoulder. "No Pete - that boat started a quarter of a mile away - over there. So that - that - thing took off." I was startled. They were unanimous.

Oh my good God! I thought back to what I had seen - a man leaning over the front of the boat and a man hunched in the back. And then things began to click in my mind ...... How long had it taken the object to cover, say, half a mile of Loch? Eight, maybe ten minutes - probably less. And then the motorboat started up  ..... but there had been no engine noise before - nor any sign of paddles or oars - nothing to indicate any sign of propulsion. And the thing had turned from the size of a football to the size of what I what I took to be a boat. I thought back to what I had heard - a sudden sound of the engine and my immediate thought - the swine - they've made a fool of me.

I played the scene back in my mind - the figure leaning forwards over the bow - the man hunched in the rear. And suddenly I could not picture the boat. The two figure shapes - yes - but what they should have been perched on - no, I could not see. Damn me for being wet, tired and stupidly turning away. There was something - and I had blown it. Immediately - without further discussion - we found some paper and wrote it all down. The three accounts were remarkably similar. Three of them used the word monster - no underlining no inverted commas, no apology for the identification.

What had I seen on that misty but still light evening - so long ago? But then the glorious news - we had been saved. While I had been at the Loch side Dave had taken forty seconds of cine film of the monster. When we returned to Birmingham we ploughed through thirty four minutes of Loch Ness stuff - to discover

...... forty seconds of blank screen - with flashes of light across it - as proof it was perfectly useless! It seems as though Dave had left the cover on the cine - or maybe at that distance it had been too dark (no - it was light - it was nine o'clock on a summer's evening) so whatever - we had failed. And so in truth my story ends.

So ends Pete's tale. Obviously it is left to readers to form their own opinion. It is one of those few accounts that takes place in a real monster like setting. Ancient castle towers over a mist laden scene as a large shadowy shape approaches the eyewitness only to turn at the last second. All we needed was a full moon shining above. However, sunset at that time of year was still an hour away. Mist forms when warm air encounters cooler air at the surface of the loch. The water droplets in the warm air condense to form a visible layer of condensation.

So were the two presumed men Pete saw actually a long neck and hump? We will never know for sure, but thanks for the story, Pete.