Over the years, I have discussed and analysed this, that and the other photograph of the Loch Ness Monster taken by a variety of individuals over 83 years. Looking back on these, I realised I have not actually ever handled a glossy photograph of the Loch Ness Monster. To begin with, it was prints in Nessie books and later in life the now ubiquitous digital images we all view on our computer screens or occasionally print off.

So, whenever I call an article, "Analysis of the X Photograph", this is not strictly true. I am invariably examining a JPEG image or a glossy print from a book. This actually matters, as I shall explain later. Finally, I did get my hands on an original photograph, and that was the Peter O'Connor one taken in 1960. I purchased it last year and you can see it below propped up against a laptop screen displaying the same image, which was originally scanned from Tim Dinsdale's "Loch Ness Monster". 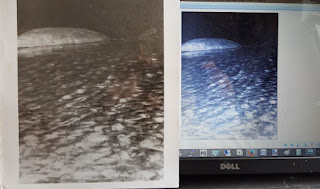 On the reverse side of the photograph are the words below. The North American rights to the image had been purchased by Field Enterprises Educational Corp. from Peter O'Connor for the use of their subsidiary, the World Book Encyclopedia. I note the back says the photograph is the property of Peter O'Connor. I am not sure how that works out. Do they mean he retained the intellectual property rights or did he continue to own the glossy print? I would presume the first option. 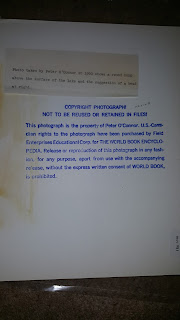 World Book Encyclopedia's involvement with the hunt for Nessie is already well known to researchers and historians. As you can see from the image below they sponsored Dan Taylor's submarine expedition as well as other Loch Ness work. 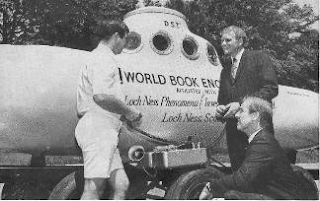 Thanks to the work of Dr. Roy Mackal (also photographed above, standing to the right), the Loch Ness Investigation Bureau secured a $20,000 grant towards upgrading equipment in 1967. That would be about $150,000 in today's money. So, it may be that World Book Encyclopedia acquired the O'Connor photograph around the same time. The clipping below mentions the grant and is taken from the Boca Raton News dated 18th June 1967. 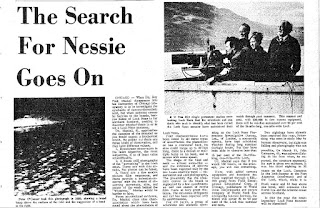 So much for the origin of this glossy photo, but what use is it? I did notice when comparing it to the screen image, that the digital image was more cropped. I would say the digital image had been cropped by 10% along the vertical, with more taken off the top than the bottom. This did not actually reveal much more on the glossy, just more blackness. though I am looking more intently into some markings.

However, that is not the main problem, and this goes to the heart of many a Nessie photo. The glossy photo I got in the post is also a cropped picture! This is known because Tim Dinsdale's book also published another aspect of the O'Connor picture showing more in the horizontal plane (reproduced below). 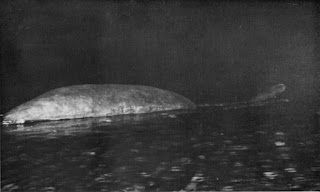 In other words, I have a photograph of the O'Connor creature, but not the real, uncropped photograph! That is a disappointment and you can extend that problem to other Nessie pictures which are normally offered to us in a zoomed-in format.

In other words, the search for these better images continues.