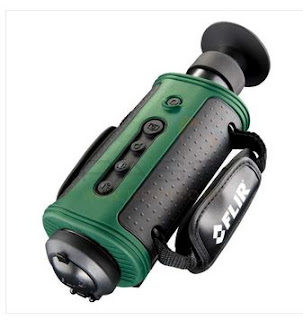 As my first visit of the year to Loch Ness approaches, I mentioned my previous plan to use a drone to scout the waters just below the surface of the loch. I have now added a thermal imaging device to the repertoire of scientific devices as the hunt for data on the creature steps up. To be more precise, I will be taking up a Flir TS24-Pro imaging device shown above.

You may have seen devices similar to this in use by the popular series "Finding Bigfoot" and I have always wanted to acquire one for the Nessie hunt.  The device works on the principle of constructing images from heat and not light. This is demonstrated in the two images below which shows an optical image taken at night and the corresponding Flir image built on the heat emitted by the deer and surrounding foliage, etc.

This is in contrast to another data collecting device I use which is the Yukon Ranger Pro night vision binoculars which work on the principle of intensifying the low level of ambient light into a monochrome image. An example of the use of this device can be viewed in this previous article. One advantage the TS24-Pro has over the Yukon is that it has an SD card feature to allow video or still image recording while on the move. The Yukon video stream can only be recorded by attaching its composite video output to a cumbersome device like a laptop running video processing software. 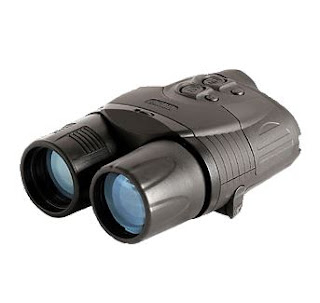 Nevertheless, each device has its own particular domain of use. In the case of the Flir, if I am fortunate enough to record a heat image of the Loch Ness Monster, then that could be used to determine to what degree the animal is endothermic or exothermic by comparing its heat signature to other animals. Mind you, getting any heat image of the beast would be a bonus. Clearly, this is a device that is suited to the night environment where things invisible to the naked eye cannot escape the gaze of the thermal imaging device.

How and where the Flir will be used is still in the planning. I may employ it on the dawn night run alongside the optical dashcam or just use it on beach patrols. One possible problem I envisage is that having gazed at the bright thermal images through the eyepiece, it will take a while for the eye to re-adjust to the surrounding low light levels of the night.

By coincidence, I was recently watching a documentary on the Lake Champlain Monster and noted a couple who had taken the hunt to a small island on the lake with a similar device looking out for Champ on land by night. I can relate to that tactic, firm in the belief that Nessie also has nocturnal habits.