I will be giving a talk on the Loch Ness Monster to the Edinburgh Fortean Society on Tuesday 11th February at 7:30pm. The venue is the Counting House pub on West Nicolson Street in Edinburgh. The Society's website can be found here.

The talk will look back on the year past from the point of view of the Monster as well as the Loch Ness area. That will include excerpts on my own work as well as some stories from the area (some of which have not reached this blog!).

Entry is £1 only and the talk will have a Q&A session at the end. Finish time will be about 10pm. Hope to see you there.

A fellow monster hunter, Scott Mardis, altered me to an interesting YouTube video on Frank Searle. To be more precise, it is by Frank Searle himself and is described as a cassette recording he sent out to subscribers of his newsletter in 1979. My thanks to Terry Sly who owns the YouTube channel for putting this online.


You may or may not want to listen to the whole tape before I discuss it below. If you listen first, be warned there is a two minute silence at 28 minutes which is not a fault. The discussion by Frank can be divided into five sections:

The Search for the Monster


This is the main section consisting of Frank's views on the creatures as well as the attempts to track it down. Not surprisingly, he is somewhat scathing of organisations and expeditions he regarded as profiteering enterprises. The Loch Ness Investigation Bureau does not escape his judgement as he accuses the organisation of non-existent camera watches in the last few years and an amateurish approach.

People involved in those latter days may choose to answer this themselves, though in my recent tribute to the late Roy Mackal, it seems there is an implication that the search had moved from surface camera watches to other techniques such as sonar, hydrophone and so on.

He is equally scathing of Robert Rines and the Academy of Applied Sciences and suggests the prevalent theory of the time that the famous "Gargoyle" photograph was none other than the monster prop for the 1969 Sherlock Holmes film. Frank even claims he has a shot of the sunken prop underwater, but gives no indication as to how he obtained this! It seems Frank's view of the AAS would not be far off that of modern sceptics!

Frank goes with the popular theory of its time, the advanced or modified plesiosaur theory. Though he also says the creature is not an air breather. Are these two reconcilable? Thinking also that there may be thirty animals in the loch, he splits them into three or four families which keep to their areas of the loch. An interesting view, though what makes him think that is not clarified.

Of course, there will be agreement between Frank's Nessie views and other monster enthusiasts. I agree with him that sightings are not much more than ten per year but I do not agree with him when he dismisses land sightings as all fabrications and misidentifications. Again, sceptics and Frank Searle meet on common ground. Curiouser and curiouser!

What would Frank do if he had unlimited exploration funds? He would dredge the loch for those Nessie skulls and bones. Now this kind of operation is objected to today, but given the loch floor covers over ten square miles, that would seem to be somewhat over protective. But then again, how much surface would you have to dredge to hit Nessie gold?


The recording goes silent for a couple of minutes after 28 minutes, but don't adjust your controls as Frank does come back with a selection of his own alleged sightings and others from the literature.


A whistle stop tour of the loch then begins as Frank begins near Dores and heads south and then north along the loch with various observations. One interesting statement he makes as his imaginary tour goes past Alltsigh is how he claims to have had his first sighting, not when he pitched his tent in 1969 but in 1965 when he was on holiday at Loch Ness.


Some old folk tales are related as Frank relates the tale of the Witches Burn running by his tent and the soldier ghosts that reputedly march between Ballacladich and Dores.


Finally, some monster hunting tips from our controversial figure as he sums up his time there with 25,000 visitors to his caravan exhibition, 2,000 letters answered, 38,000 hours of surface watching, 38 sightings and 9 pictures! The video finally puts up a picture of the interior of Frank's caravan exhibition which I took in the early 1980s. I am not aware of any other such snaps, but would like to see if any are out there to add to the historical Nessie archive.

I would also have to ask Terry about the Searle gravestone at the end of the video. I am not sure it is that of Frank Searle, who I believe died in 2005. 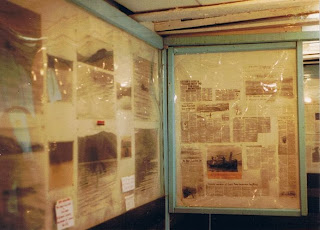 How the tape turned up is a story in itself. Terry's father was John "Sparky" Sly, a piano player, who met Frank Searle in the 1970s when he took his piano up north to try and "serenade" the monster. You can see a clip of a conversation he had with Frank Searle below. After that, Frank sent his tape and newsletters to the Sly household. How many of these tapes survive today is not known, so again, thanks to Terry for putting it online on his YouTube channel.