The Treasure of Urquhart Castle 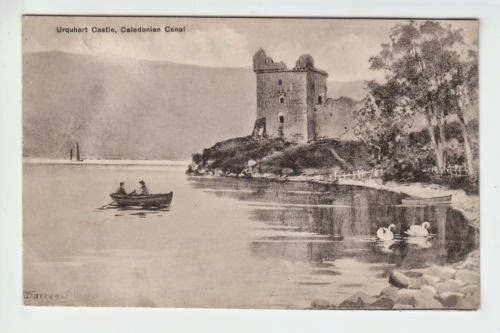 Strange creatures in Loch Ness are not the only legend to be associated with this dark stretch of water. During my research for "The Water Horses of Loch Ness", I found various stories which, though unrelated to the Kelpie legend, proved interesting nonetheless.

One of these concerned Urquhart Castle, as I found when looking at "In the Hebrides" authored by Constance Gordon-Cumming in 1883.

It is now a picturesque ruin, rising from the loch on a rocky promontory. The Highlanders call these grey ruins Strone Castle, and believe that two mysterious vaulted cells are hollowed in the rock below. The one contains a countless treasure of gold; but in the other a fearful pestilence is sealed up, which, if once released, would stalk forth in irresistible might and depopulate the land, having first slain the rash hand that opened its prison door. So the dread of liberating so dire a scourge has even subdued the covetous craving for gold, and the treasure-chamber remains inviolate.

The same story is told in the 1893 book, "Urquhart and Glenmoriston; olden times in a Highland parish" written by William Mackay:

It is believed in the Parish that there are two secret chambers underneath the ruins of the Castle — the one filled with gold and the other with the plague. On account of the risk of letting loose the pestilence, no attempt has ever been made to discover the treasure. This myth, in various forms, and associated with various places, is as old as the classic fable of Pandora.

Looking at this story, one is reminded of similar treasure curses, such as the tomb of King Tut. But one wonders if there is any truth behind this legend. Just as many believe there is a real creature behind the poetical Each Uisge, could there be a real trove of gold, silver and precious stones under Urquhart Castle? Given that the castle was raided, pillaged and finally blown up, there would seem to be little room for hidden treasure.

But there is another legend of a local treasure hoard, and that is the Jacobite gold of Bonnie Prince Charlie. It is told that Spain had financed the Jacobite Army to the tune of 400,000 gold livre a month. Seven boxes of these coins had arrived after the defeat at Culloden in 1745 and they were reputedly hidden in the forests not far from Loch Arkaig, over thirty miles from Castle Urquhart as the crow files. Could some of this have found its way to Loch Ness?

We could speculate further on the Templars and the treasure of King Baldwin the Second (died 1131). His treasure was allegedly taken to Rosslyn Chapel near Edinburgh, but there was also a Templar house near Urquhart Castle (now only remembered in the location of Temple Pier). This one is a bit of a longer shot.

In general, troubled times usually impel men of wealth to carefully hide their worldly goods and so I would not entirely dismiss the story out of hand. The curse part of the story can be seen as a deterrent to treasure seekers, but is it possible that some owner of the castle was forced to leave the castle in haste without his hidden treasure and his secret died with him in some distant place?

Who can tell, but it is to be noted that the level of Loch Ness rose by six feet with the building of the Caledonian Canal in the early 19th century. Perhaps our fabled hoard is now only accessible to divers? Or perhaps a long sealed door of stone lies undetected, now overrun by bushes and trees?

Today, a kind of modern combination of plague and treasure may be argued for the castle. With record numbers paying record prices to visit the site under the aegis of Historic Scotland, the uncovered treasure is certainly there to behold. On the other hand, some locals certainly regarded the plans to expand the site some years back as a plague of sorts upon the landscape.

All in all, a fascinating story, but one beyond verification; until someone stumbles upon a strange looking rock one day ...

The Hugh Gray Picture And Turtles

So this monster starts popping up in Loch Ness and the articles and letter begin to fly off the typewriters (remember them?). By the time the media speculation began to subside in late 1934, just about everything that was big and could swim had made it onto the Nessie identity parade.

The turtle was no exception and got into the public Nessie consciousness as early as 8th December 1933. This clipping from the Daily Record is reproduced for your edification. Note the editor throws in a few antediluvians while he is at it (namely, the elasmosaurus, clidastes and mosasaurus). 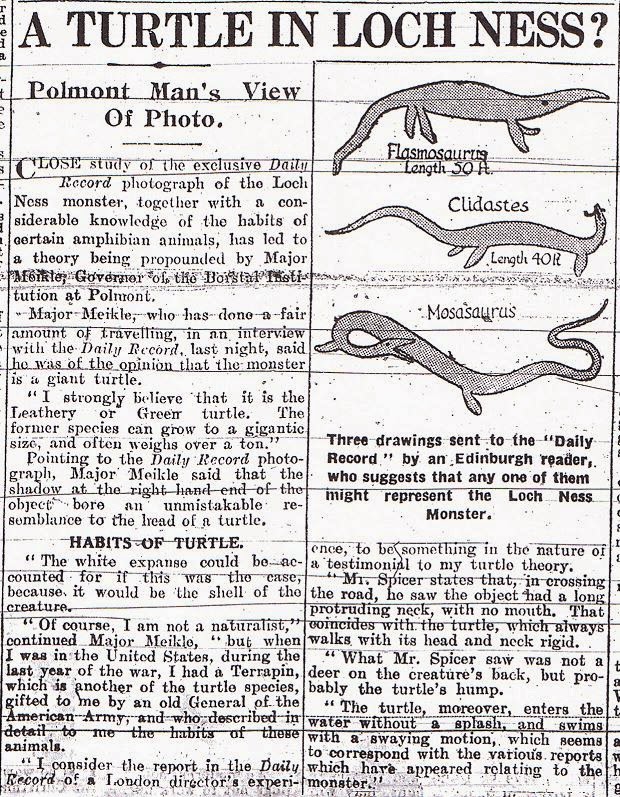 A TURTLE IN LOCH NESS?

Close study of the exclusive Daily Record photograph of the Loch Ness monster, together with a considerable knowledge of the habits of certain amphibian animals; has led to a theory being propounded by Major Meikle, Governor of the Borstal Institute at Polmont.

Major Meikle, who has done a fair amount of travelling, in an interview with the Daily Record, last night, said he was of the opinion that the monster is a giant turtle.

"I strongly believe that it is the Leathery or Green turtle. The former species can grow to a gigantic size, and often weighs over a ton."

Pointing to the Daily Record photograph, Major Meikle said that the shadow at the right hand end of the object bore an unmistakable resemblance to the head of a turtle.

"The white expanse could be accounted for if this was the case,  because it would be the shell of the creature. Of course, I am not a naturalist," continued Major Meikle, "but when I was in the United States, during the last year of the war, I had a Terrapin, which is another of the turtle species, gifted to me by an old General of the American Army, and who described in detail to me the habits of these animals.

"I consider the report in the Daily Record of a London director's experience, to be something in the nature of a testimonial to my turtle theory. Mr. Spicer states that, in crossing the road, he saw the object had a long protruding neck, with no mouth. That coincides with the turtle which walks with its head and neck rigid."

"What Mr. Spicer saw was not a deer on the creature's back, but probably the turtle's hump. The turtle moreover enters the water without a splash, and swims with a swaying motion, which seems to correspond with the various reports which have appeared relating to the monster."

The Atlantic Green Turtle and Leatherback Turtle are indeed big creatures. Though the Green Turtle is the largest hard shelled turtle, it rarely gets longer than five feet. It also tends to inhabit warmer waters, but some could make their way to more northern waters.

The Leatherback Turtle lacks a bony shell but is the largest turtle at lengths approaching ten feet. Again, a Leatherback could be found as far north as the seas around Loch Ness.

But the reason for Major Meikle's letter is his observation that a turtle like head can be seen in the picture.  He is no doubt referring to this image which has been promoted at this website. However, if he was looking at the inferior image printed in the Daily Record then I take my hat off to him. 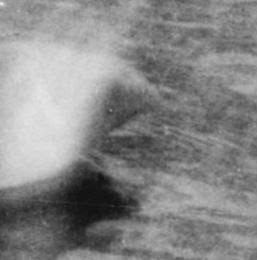 The reason for that is simply because various modern sceptics who have looked at this image profess to see nothing, say nothing or declare it is nothing (this despite it casting a shadow). Strangely, they have no problem seeing a dog which has no visible back or paddle wake.

Now I have compared this head to an eel and other fish previously. How does a large turtle fare in this regard? I found a suitable picture which I show here compared to the Hugh Gray picture. 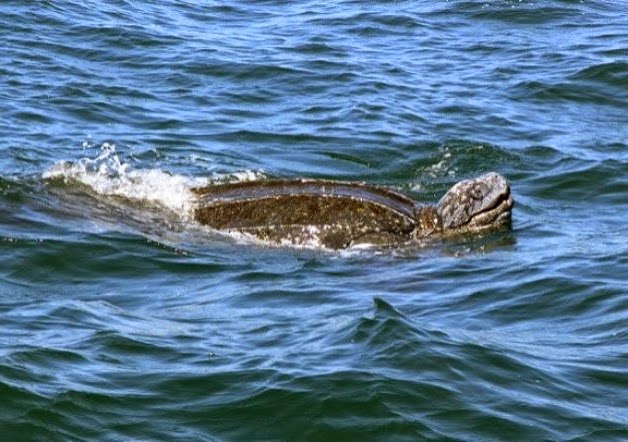 Clearly, there are differences in the two specimens. The eyes look roughly in the same place, but the turtle eye is larger. The Loch Ness Monster's buoyancy capabilities also exceed that of the Leatherback (an ability we have spoken of before on this blog). There is also the matter of the tail which we see above the surface here. A look at the Leatherback's tail shows there is not much there to speak of. 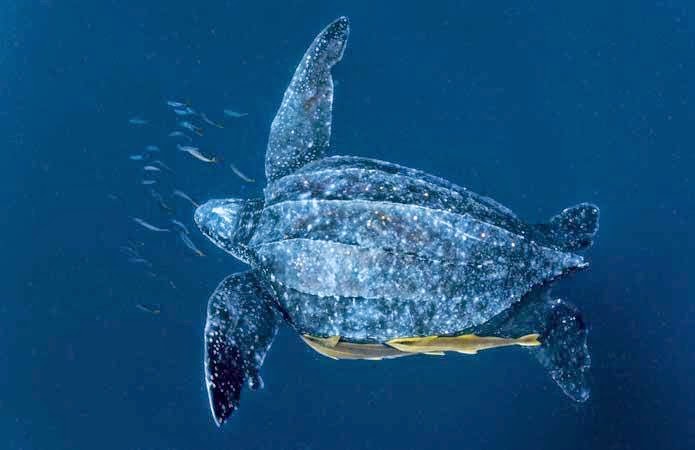 So if the Loch Ness Monster is a variant of the turtle (as discussed in a previous article on the "plesio-turtle"), the Hugh Gray photograph is perhaps not the best place to start. Neither can it be convincingly argued that the Spicer creature could be a form of turtle. Though Major Meikle speaks of the turtle neck being held rigid, the neck described by George Spicer was in fact undulating in a most un-turtle like manner.

A lot of the theories which arose in the ferment of 1934 are now long gone whilst some still provoke debate. Indeed, whatever the time or place, let not any sceptic (or believer) stifle the conversation which clothes this phenomenon known as "The Loch Ness Monster"!

POSTSCRIPT: By coincidence, a leatherback has just turned up on the Scottish coast.