There is no shortage of theories to explain the range of sightings claimed for the loch ness monster. In a series of blogs over time I will explore the various explanations put forward. But first we start not with the Loch Ness Plesiosaur or the Loch Ness Squid but the Loch Ness Log. A very unexciting and uninspiring explanation for sightings but one that is undoutedly true for a certain percentage of sightings. That this was an explanation as old as the Loch Ness Monster media sensation is clear from this 1933 photograph. 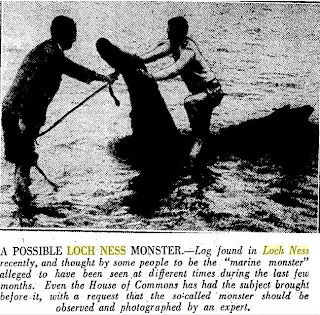 The question one needs to ask is what constitutes a sighting? For our purposes, it is a claim that something large and inexplicable was seen by one or more people in the loch (clearly a log will not explain land sightings). Inexplicable implies that the observer thought there was no explanation beyond the normal (waves, known animals, boats, etc) for the event.

However, in the domain of sightings, there are ever decreasing circles in which the inexplicability of the object increases and the gamut of normal events available to explain the event becomes increasingly improbable.

The seminal work on analysis of sightings is Roy Mackal's The Monsters of Loch Ness published in 1976. He stated that there were over 10,000 known sightings reported but not necessarily put down in print. His estimate of sightings making it onto paper was about 3,000 of which he only accepted 258 as suitable for his computer analysis. That did not mean the other ~2500 were all misidentification, but rather he felt they could be accounted for by other known effects. He preferred to take an over cautious approach in his analysis so any doubt about a sighting was given a natural reason. If there is a large creature in Loch Ness (yes there is), then it is clear that sometimes a sighting of it will be indistinguishable from logs, waves and other items. In such cases, one is obliged to go with the natural explanation even though it may not have been the actual cause - we do not know in such cases.

Now how he came by the number 10,000 I am not sure since most of it was only verbal. But we will assume that the quality of those sightings was not much different from the 3,000 that made it onto print. It is that range of 10,000 sightings (or over 270 per annum between 1933 and 1969) that we refer to in accouting for what for the phenomemon may been been.

Now it is clear even to the most ardent Nessie believer that within these thousands of sightings that some people mistook parts of trees for the monster. One may then say "How can anyone be so easily deceived?"

The answer is that normally they should not and I only expect logs to form a small part of sightings for reasons laid out below. Firstly, where do the logs come from? They in the main flow into the loch from the large number of rivers and streams that feed the loch. The tree parts could have come off their source trees naturally or by the action of men. Then they usually drift at the mercy of tides in a slow sedate manner until they are washed up on shore or sink as they slowly absorb water over weeks.

During this time, it is clear that a suitably shaped branch in certain circumstances could deceive someone expectantly looking for a monster. I don't doubt that but normally this should fool no one. A log drifts at quite a slow speed and the exceedingly long time during which the log can be observed should over time dispel any notion of a strange creature. It is in that light that log explanations normally need some other event to reinforce their credibility. They are:

1. The witness did not stay long enough to verify it was a tree.
2. The Loch Ness seiche.
3. Underwater gas eruptions.
4. The log drifts out of sight.

In the first case, if the witness(es) is driving past in a car or for some other reason cannot stay then it is possible that a log could explain what they say. Though one would normally expect an excited witness to stop and stay to watch such an event, it is conceded that some people for some reason will not stop to watch.

In the second case, there is a phenomenon common to certain bodies of water called the seiche in which wind actions on surface water will force the water to one end of the loch upon which it flows back in such a way that a standing wave may form at the surface or above the thermocline (an underwater boundary between colder and warmer water). This has the effect of making a surface object such as a log move against the prevailing wind and give the impression that the object is alive. Note however that this does not preclude the log remaining sight a long time unless reasons 1 and 4 kick in.

Thirdly, in attempting to explain some long necked sightings, it was suggested that eruption of gas from fissures or decaying material could force an underwater log to the surface, stay visible for some seconds and then sink again with no time to verify the true nature of the object. This we consider an event so rare as to be a very specialised explanation.

Finally, if the log simply drifts out of sight into a bay then again there may be no time to identify the tree but note that this is dependent on the witness' position and how quickly it drifts out of sight (which will not be quick). Note that the loch's long dimensions and lack of big bays make this witness-log-bay configuration uncommon. The deatils of each individual sighting should determine if such a theory is possible.

In summary, tree debris may sometimes look like unknown beasts but by and large will not fool people unless some other event intervenes such as the object not being in sight long enough for verification. It is expected that claimed sightings of monsters which endure for a long time are open to such an explanation but those that last less than minutes require further analysis.
Posted by Glasgow Boy at 07:24 8 comments: