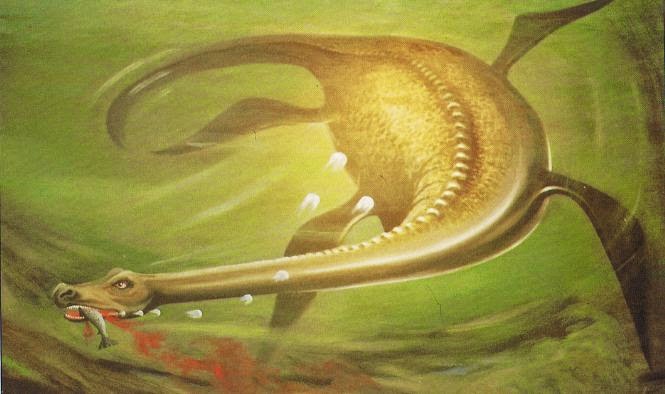 A mini debate of sorts has arisen in a small corner of the Web concerning Plesiosaurs. To wit, is the Loch Ness Monster one of their ilk? A recent article by Nick Redfern dismisses the idea and that has led to a growing thread on the Zombie Plesiosaur Facebook page. I chipped in with a few comments but thought after nearly four years of blogging on Nessie, I really ought to say something about plesiosaurs.

In fact, it is well overdue since the Loch Ness Monster and plesiosaurs has been fixed in the public mind since the early days of the Nessie story. Indeed, the two have been almost synonymous in the media representation of the phenomenon for decades. The reason behind that is quite simple when the various theories are considered by the populist press.


Nothing resonates more with the public imagination than a living dinosaur. Okay, I am not sure plesiosaurs are strictly dinosaurs, but the public doesn't care about that. The earliest reference I have seen on this theory in the Loch Ness story is from the Inverness Courier dated 24th October 1933. That article mentions a Philip Stalker who gave a radio talk on the monster citing this amongst other theories.

This was only just over five months after the first reports began to be published. Rupert T. Gould also mentions a letter to the Morning Post newspaper which promotes the theory on the 14th October 1933. I have not seen that particular newspaper, but it is fairly clear to me that the long neck from the August 1933 Spicers story was the catalyst for this line of thought.

That being said, Rupert Gould was not favourably inclined to the theory in his 1934 book. His reasoning being that the air breathing creature should have been seen more frequently, some bones should have been found and the creature was extinct anyway. He did not discount the idea that some evolved descendant of the original plesiosaur swam the oceans of the world, but he could not see such a beast residing in Loch Ness.


However, the idea that Loch Ness contained an evolved form of the species gained traction in the decades ahead. Loch Ness Monster expert, Maurice Burton, promoted the idea towards the end of the 1950s and his student, Tim Dinsdale, fell in favour with the idea when he published his popular book "Loch Ness Monster" in 1961.

Tim attempted to counter Gould's objections by suggesting ideas such as the monster covertly taking in air via nostrils on the top of the head or even using the reports of "horns" as suggestive of extended nostrils. Meanwhile, Tim could always call upon the trusty ceolacanth to counter arguments about extinction. As a bonus, it would be proposed that a modified plesiosaur could have taken upon itself other quirky abilities, such as the monster's flexible hump configuration (others would also suggest a hypothetical rhomboidal tail misinterpreted as a second "hump").

It seemed to work as the theory gained ground into the 1960s and 1970s. The painting at the top of the article was executed by William Owen and I believe formed part of the Great Glen Exhibition at that time. How many of the monster believers held to the idea of a modified plesiosaur is not clear to me, but it seemed to be ahead of the other candidates such as eels, worms and tulpas.

However, Roy Mackal, in his 1976 "The Monsters of Loch Ness", downgraded the plesiosaur to third place in a list of candidate animals, well behind the giant eel and amphibian. It would seem these days that the giant eel has triumphed over the plesiosaur as a hopeful monster.

By the time Tim Dinsdale published the fourth edition of his book in 1982, he still listed the candidates but he was now non-committal on any of them. He still believed there was an unknown animal there, what it was eluded him (though one might wonder if his less publicised paranormal views had a say).

I myself have not subscribed to the traditional plesiosaur theory in a long time. The problems are too many to me. The idea that a number of air breathing plesiosaurs could be swimming in the upper echelons of the open water column was dealt a blow when sonar failed to register that scenario. Yes, anomalous sonar contacts have been recorded over the decades, but nothing consistent with open water air breathers. The large lungs would have easily shown up on sonar.

The problem with required multiple surfacings to breath was also evident. Dinsdale speculated about the use of extended horns to take in air but this was not a solution to the rarity of monster surfacings. The problem is not inhalation, it is exhalation. Have you ever seen a whale come up for air? The noise and spray that accompanies the exhalation leaves no one in doubt that there is a large animal around.

If the Loch Ness Plesiosaur comes up for air, even just below the surface, we should hear it before we see it. I would also add that even if the creature was regularly just swimming inches below the surface, the head and part of the neck would be visible from cruise boats. The conclusion is simple, the Loch Ness Monster cannot be an air breather, even by surreptitious means.

Apart from the fact that the plesiosaur is extinct in the fossil record, there is the problem of those shape shifting humps, that very flexible neck and a head that is so small it is often described as a continuation of the neck. We even have reports of the head-neck extending in length and retracting into the main body! These are more suggestive of a neck-like appendage that is boneless rather than the neck vertebrae of the traditional plesiosaurus. Furthermore, could the plesiosaur move on land like our beast has been reported doing?

When all you have is 70 million year old bones, there is plenty of room for speculation. This all points to the conclusion that the plesiosaur as known from the fossil record is an unlikely candidate for the Loch Ness Monster. However, this did not deter those such as Tim Dinsdale who initially suggested a modified plesiosaur that had developed various Nessie-like attributes over geological time.

So is it as simple as adding in skin/gills which have replaced lungs to extract oxygen from water? How simple is it to add in those multiple humps? If the lungs change into a buoyancy mechanism, how does it still evade sonar? It should be clear that the more features that are added in, the more improbable our converted plesiosaur becomes.

The idea is not impossible, it is just unlikely that an extinct plesiosaur has turned up at Loch Ness with all these add ons. Like Tim Dinsdale, I regard the Loch Ness Monster as something else - an unknown creature yet to be identified. That may seem a retrograde step when one can at least come up with something known to science from the past. I agree, but in my opinion the sightings database says "No" to plesiosaurs.