The BBC go to Loch Ness and meet Alex Campbell 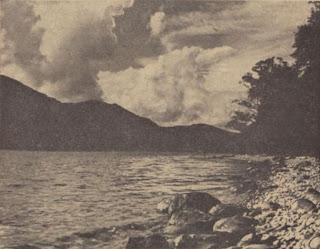 It was on Sunday the 21st August, 1938 that the BBC broadcast to radio listeners a report on their trip up north to investigate the Loch Ness Monster. It was a 25 minute slot just after 10pm entitled "Fact or Fiction? The Loch Ness Monster" and the Radio Times described it thus:

A Feature Programme from Edinburgh about Scotland's world-famous monster, supposed to be living in Loch Ness, Inverness-shire. With an historical survey of such monsters in the district, traditional speculations on that existence, and accounts from eye-witnesses, recorded by the BBC Mobile Recording Unit. From material supplied by Lieut.Commander R. T. Gould.  An epilogue by E. G. Boulanger, director of the Aquarium of the London Zoo.

The tradition of a monster - giant serpent or giant lizard - inhabiting the fathomless waters of Loch Ness is at least twelve hundred years old. According to St. Adamnan, who died in 704, St. Columba saw it while on his way to convert the King of the Picts. It has been seen many times since. In 1871 a Mr. Duncan Mackenzie saw a dark, humped creature swimming very fast with an undulating motion. It was seen again in 1903 and reappeared in July, 1930, since when it has been seen (or is alleged to have been seen) a number of times by numerous witnesses, some of whom will come to the microphone this evening. Pictures of some of the witnesses whose voices you will heat will be found on page 9. At the end of the programme E. G. Boulanger will reply with a statement of the case against the monster's existence.

The year of 1938 was a year on a downward slope for events at Loch Ness. The co-mingling of hype and reality four years before as people of various shades and intentions thronged at the loch was over. The world was becoming more distracted about another great war with Germany. Indeed, the tension concerning Adolf Hitler's claims over the German speaking region of Czechoslovakia was heightening over the weeks surrounding this BBC programme.

I don't know if the BBC were there in the monster fever year of 1934, but better late than never. A promotional page was also printed showing some of the main characters for this production. The picture below that shows their recording van parked up beside the loch ready to interview and record the various testimonies from eyewitnesses.

Now I was previously opining how I would love to have heard this 82 year old radio programme from long ago when I got an email from a fellow enthusiast, Michael Delos. He pointed out that the BBC news website had published excerpts from that programme back in September 2019! Happy days, so I went over to the webpage which you can find here and listen to as well. The length is only about a tenth that of the original but it can help us with the eyewitness accounts. There is also credit due to another cryptid fan, Gary MacEwan, who sent me the scans of the Radio Times article. Teamwork. 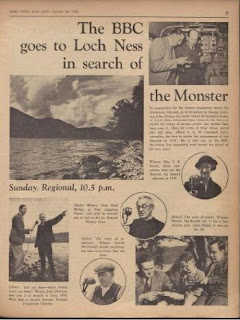 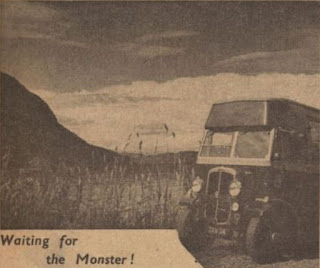 So let us look at some of the eyewitnesses who were spoken to. The first was a Miss Janet Fraser who saw the creature from the Halfway House tearoom some five years before. You can see here below facing up to a ponderous looking microphone. Readers may recall her name as a subject of a recent article on this blog entitled "The Long Necks of 22nd September 1933" which you can find here. The available radio excerpt mentions this account but the Radio Times also alludes to a sighting she had two years later and to that we will go as we reproduce the account from the Scotsman newspaper of the 24th June 1935 in which she and over a dozen of customers at the Halfway House tearoom had another long necked sighting. The more witnesses, the better I would say. Another interviewee was Dom Basil Wedge of the Fort Augustus Abbey (below), who we are told saw it with his school pupils during a Natural History class, which seems eminently appropriate as they witnessed one of nature's most talked about mysteries. The actual contents of his account proved somewhat elusive. Constance Whyte, in her 1957 book. "More Than a Legend" merely mentions him in passing saying that his account does not add to the evidence already set out in her book. 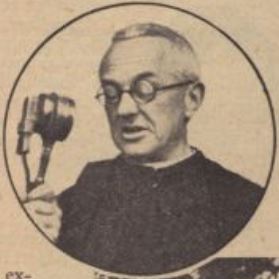 I do not see his account anywhere else, though I am sure it will be in some unspecified Highland newspaper of the time and so we rely on the audio excerpt in which he describes seeing three humps in a line moving north westerly at a great speed. Up next was Duncan MacDonald, who was the proprietor of the garage beside the Invermoriston Pier. We are told that he had seen the beast on no fewer than five occasions. Now we could not find all five of these accounts in our clippings archive, but we did find two of them, both taken again from the Scotsman newspaper. The first is from the 10th May 1934 edition and the other from the 1st March 1938 which are shown below. 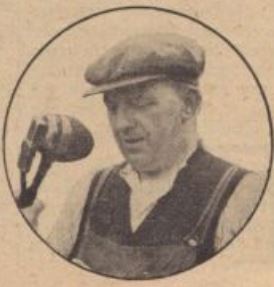 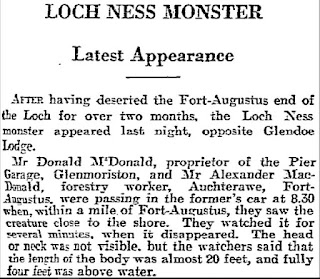 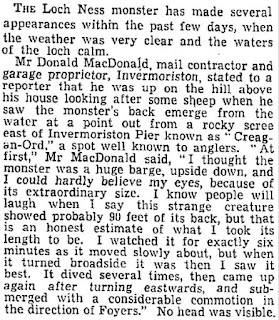 The first account is the standard single hump appearance which forms the main class of eyewitness accounts, in this case twenty feet long by four foot high and probably observed from the clearing at Inchnacardoch Bay. I say a standard sighting, but what would we give just to be privileged enough to be witnesses to a "standard" sighting! The second account from four years later is a bit mind boggling when he estimates another back sighting to be about ninety feet in length!

The parallel account from the Inverness Courier does not state this size but rather states its length as "very, very long". Now we may laugh, as Mr. MacDonald suggests, after all, this implies a creature over one hundred feet long if we include the submerged parts. Some, because of this, may further suggest he merely saw a large windrow or wind slick which can appear darker than the surrounding waters. However, windrows do not submerge, move around and turn ninety degrees to present their broadside.

Is (or was) there a monster of such huge proportions in Loch Ness? No other account comes close to stating such a length. There was an account from June 1950 by a C.E. Dunton who described two thirty foot coils separated by up to thirty feet giving us ninety feet, but we can take these to be two creatures. Was Donald MacDonald's creature actually two creatures or did he just overestimate by a factor of two to three times?

This is where we enter the world of statistical outliers. By that I mean descriptions of the monster which are unique to just one or two cases or are contradictory to the general corpus of sightings. So, this ninety foot description is unique to the corpus of accounts, but it is not contradictory to them. We can have statistical outliers that can be both unique and contradictory or one of them. For example, a hypothetical account which describes the beast as displaying a forked tongue like a snake would be unique but not contrary as no one else has given an account which could contradict it.

However, if someone described a creature which had only two fore-flippers and no rear flippers would not only be unique but contrary to the general eyewitness accounts suggesting four limbs. A claim of a ninety foot creature does not disallow smaller creatures of thirty to forty feet and the converse would be true. But, no one else has ever described such a huge creature which begs the question how it managed to evade the sight of everyone else for the last hundred years?

This suggests Mr. MacDonald got this estimate wrong and we should not add the likelihood of a hundred foot creature to our theoretical frameworks for the creature. Nevertheless, what is merely being said is that the tail should not wag the dog, so to speak. If further analysis suggests he may be right, it should not be shot down in an uncritical manner.

We then move onto a younger eyewitness by the name of Patrick MacDonald who is shown below being interviewed by John Pudney. We are told by the Radio Times that he only saw the monster for a few seconds, but like Mr. Wedge, I cannot find the lad's account anywhere, though it may yet languish in a remote newspaper article somewhere. However, he is on the audio excerpt and it turns out he is the son of Donald MacDonald and he saw the creature as it were looking like "an island" in the water before submerging. 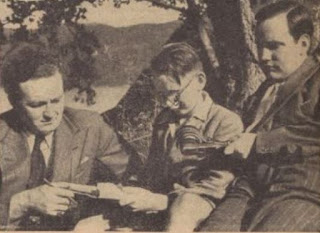 Finally, in terms of eyewitnesses, we have no such problem with John MacLean and his twenty yard sighting from June 1938, which is well covered in the literature. But we have already covered the revealing picture below in this previous article, so we will not dwell further on it except to say he is also on our radio excerpt from the BBC website and it would have been recorded only weeks after his sighting.You can see John being interview by the BBC journalist, John Pudney, below. 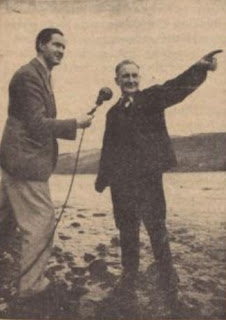 Such were the accounts and the BBC report is an important part of the Loch Ness Monster archive and I am glad it is preserved, though how one can get to hear all of it is another matter. Which brings us onto the matter of Alex Campbell. You can see him on the right talking to one of the BBC technicians in the recording van from the Radio Times article and is likely the oldest picture of him. Alex is presented in the programme as the journalist who was the first to report on the reappearance of the monster in 1933. 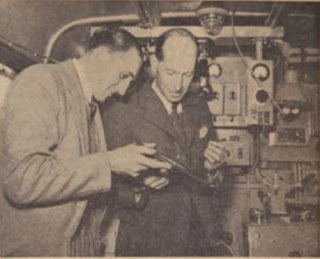 In the BBC website audio excerpts you can hear him talking about his involvement:

I knew it was a good story, something quite out of the ordinary. I puzzled my brains on only one point. In what word could I refer to the creature? At last, monster suggested itself and that is how I introduced the "Loch Ness Monster" to the newspaper world.

Now how does this figure in the history of Alex Campbell? I have not heard all the 1938 programme and add that as a caveat, but it is to be noted that Alex Campbell is not mentioned as an eyewitness, which suggests he was still sticking to the script that his neck and hump sighting of September 1933 was only cormorants to keep his monster-averse employers happy their important Loch Ness water bailiff was not off his rocker. However, this account shows that he was content to be revealed as the journalist who reported on these matters.

When was the earliest date we know he felt safe to admit he had seen the monster? One date is suggested by the Time Magazine dated October 8th, 1951. It reported on a recent TV programme also made by the BBC which styled the question of the monster's existence as a courtroom drama in which various witnesses were called before a judge. One of those witnesses was Alex Campbell who declared "I have seen it myself". What account that was I cannot tell.

Constance Whyte recounts in her book six years later that Campbell admitted to six sightings but there is an anomaly in the same book as his first sighting is recounted anonymously, presumably at his request. So perhaps even then he was not as open and transparent as he may have wished to be.

So the BBC went to Loch Ness in 1938. They recorded eyewitnesses for their descendants to hear a lifetime later and I wonder what they would have made of that. Like that generation, the monsters seen are likely dead now. We seek their descendants also.