The other "Serpent Stone" of Loch Ness

I omitted this little episode from the "From the Shoreline" series of last week as it merited a post of its own. I was made aware of this stone a while back by Nessie enthusiast, Doug. He had been over at Loch Ness some time ago and came upon this piece of rock quite by accident by the shores of Loch Ness. Last week, I finally got round to tracking down this stone and taking a look for myself. I took the picture shown below. 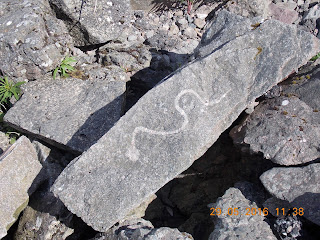 The slab of rock you see is over two feet long in length and would be a major effort for one person to lift. On first inspection, it just looked to me as if somebody has scratched a childish, serpentine figure onto the rock, perhaps with another smaller but sharper rock. That was my initial impression when I first saw Doug's own picture and put it down to somebody indulging in a form of Nessie graffiti.

However, on closer inspection, it was not clear to me that this image had been laid down in such a simple manner. I considered how an artist may have abrasively added the image; or maybe it was a fossil? In fact, it looked as if it was part of the rock itself and more crystalline in form than the surrounding rock. A close up of the rock shows that this may be more of a question for those trained in the discipline of geology than art. 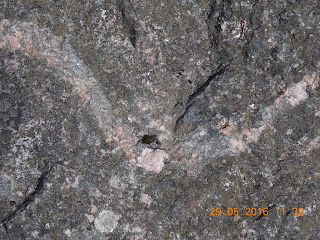 It seemed improbable that nature could have laid down a regular form such as this. Indeed, if it had, it most likely was embedded in the rock as the whole rock gave the impression of being split open. So, opinions are invited as to how this serpentine image at Loch Ness came about and whether one can assign any meaning or motivation to it.

As for this being called the "other serpent stone", I will get round to what that means in a future article! 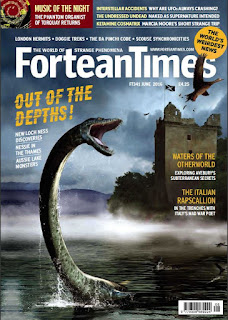 The latest issue of Fortean Times has some items on the Loch Ness Monster, including an article by myself on the F.C. Adams photograph of 1934. Now, regular readers will recall I wrote on this very subject last year. Well, it is essentially the same article but going out to a wider readership who may not visit this blog much or at all.

Actually, I offered the article to Fortean Times first before I put it on my blog. However, after no reply for ages, I just published here. Then, out of the blue, the editor replied recently saying he would like to publish! I was happy to oblige. The issue is the June edition, number 421. I checked out the paper edition in my local Tesco store today and it looks good.

I am back in my home town after another hot day at Loch Ness. In fact, when I woke that final Sunday morning, the inside of the test was quite sweltering. Looking back, when I walked along the Foyers beach on Thursday evening, I was alone. Come Saturday night, the camp site was full and the same walk at the same time encountered various groups involved in various activities.

Some were burning driftwood at beach fires, one was tying up his canoe for the night while another was teaching his young son to fish. The school holidays are still a month away, but the tourist season seems to be well into its swing. One wonders if some people have exchanged the beaches of Tunisia and Egypt for those at Loch Ness? Those around the loch who do and do not believe in the Loch Ness Monster will be rubbing their hands in anticipation of a good season.

One such person may be Marcus Atkinson, who I caught up with at Fort Augustus. Business was doing well  and they are commissioning a new boat for the season. They run a big cruiser boat as well as some faster rib boats out to the loch. You may recall Marcus recorded a strange sonar reading a while back which hit the headlines. To this day, he says he does not know what it was and despite repeated visits to the same spot, it has never appeared again. However, he had no new Nessie news for me and things seem pretty quiet just now on the monster front.

One other thing that happened on the final day was the heat haze I saw on the road between Foyers and Dores. Going back to land based sightings of the Loch Ness Monster, a sceptical theory suggests the Spicers saw otters in a heat haze. Now I had the opportunity to assess one. It was visible about one hundred metres ahead of me. I was higher that the heat haze but my dashcam was not on to record it. I reversed and turned the cam on, but the sun had gone behind a cloud and the effect was gone. I will mention that particular phenomenon in a later article.

Meantime, the game camera I had strapped to a tree on early April had taken over 10,000 pictures! This is a new model I am trying, so clearly the configuration needs some tweaking. I decided against leaving a camera at the loch over the tourist months. After all, it will take me that long to get through those images! I will be planning on deploying a lot more cameras around the loch come September.

Finally, I was asked about camping around Loch Ness. I know of at least three camping sites by the loch. There is the one I use at Foyers run by the Forbes. You can read about it here. I like it because it is right beside the loch (you can heat up beans whilst watching the loch), is new and clean and is on the quieter side of the loch (which I prefer).

I have also used the Cumberland's Campsite which is just outside Fort Augustus. The River Tarff runs past it and it is a short walk to Borlum Bay from there. It's a bit further from the loch for me and not on the south side of the loch. I am not sure what else is available in terms of pitching a tent, others may wish to "pitch" in.

In terms of wild camping, I have seen various tents dotted around the lochside. One place I invariably see tents is alongside the River Foyers a couple of miles away from the loch. I have also seen them along the beach at Port Clair and along the Dores-Foyers road. To be frank, a lot of tents could be there, but you just won't see them from the road. My own tent is a six person tent that would not even fit onto the tight shorelines. Wild camping may be a better option for smaller tents.

That's it, back to normal blogging!