The Seagull and the Surgeon's Photograph

Is there a seagull present in the Surgeon's Photograph? The thought never occurred to me until some years back when I read Edward Armstrong's book called "Sticking My Neck Out" which primarily focusses on the "escaped elephant" theory of the Loch Ness Monster. There is however a section on the idea that a seagull can be seen flying near to the left of Nessie in the famous 1934 picture.

The problem is that you are not likely to see this on any image you may care to consult apart from the one reproduced in Constance Whyte's book "More than a Legend" published in 1957. Armstrong quotes Whyte from her book who says that the chemist who developed Wilson's photographs made a second negative for himself and a print of the second less well known photograph. It is from this second negative that Whyte produced her print for the book.

This led Armstrong to postulate that there were three negatives.

Negative 1: The original bought by the Daily Mail which is probably now lost.
Negative 2: A copy made of the original by the chemist.
Negative 3: A replacement for the lost original made form a print perhaps in 1934.

Based on this theory, he suggested that negative 3 produced a higher contrast image that blotted out the bird image.

Armstrong took the Whyte image and zoomed in on this feature in his book and the image does indeed look like a bird in flight. That image is reproduced below though it is not of great quality because it is an enlarged photocopy printed onto a self published book which lacks the quality of a professional print. Nevertheless, Armstrong calculates that if this is indeed a standard sized bird then the length of the neck has to be at least seven feet and not the 12 inches of the Spurling confession. 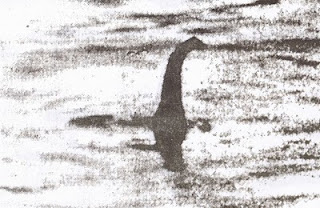 To verify this with the aid of modern PC technology, I scanned in the photo from my own copy of the Whyte book and zoomed in for a closer look which is shown below. The image is somewhat different but you get the same impression of a bird in flight. 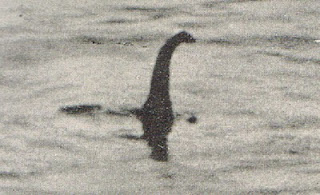 What do we make of this? Is it a bird or is it something added later such as a defect on the print? How does one distinguish between these two cases? If it is a bird then the Spurling hoax theory is untenable, if it is a defect we just move on.

Just to prove that Nessie believers do not swallow every pro-monster idea, I tend to the idea that it is a defect on the print. You will notice on my own scanned picture that there are darker areas to the left and right of the bird image which are not apparent on Armstrong's photocopy version. The fact that they can form a straight line suggests they are part of the same thing - a defect. Armstrong himself thought there may be a second bird which I presume to mean the mark to the left of the main bird image.

In fact the lesser known photo in the Whyte book also has a similar defect in a similar area which backs up this argument. (Note that despite all this Nessie skeptics doubt these two pictures came from the same four plates).

What do others think?
Posted by Glasgow Boy at 02:26 3 comments: