Continuing our intermittent tour of Tarasay House on Mull where the David James, Member of Parliament and Nessie Hunter lived we come to the press clippings.

Two rooms are devoted to Nessie memorabilia in the stately home. I have already shown the famous Sir Peter Scott painting of two Nessies in a seperate post but David James was also an avid collector of Loch Ness press clippings.

The first one shown here takes me back to 1975 when the famous head and neck Rines photographs hit the front page of newspapers worldwide. It was quite a furore and the press picked it up with glee. 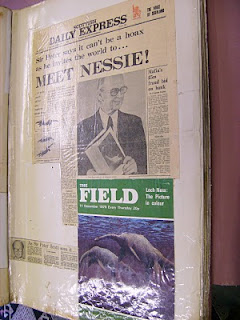 But the formation of the Loch Ness Investigation Bureau in which he played a large part also features in his clippings as this clipping from 1962 shows. 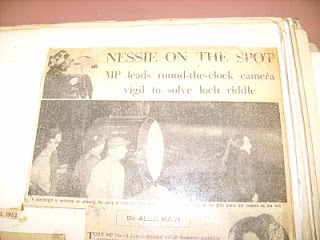 David James also contributed articles on the Loch Ness Monster and these were collected as well. This one was a reprint in some magazine originally written for The Field magazine on November 23rd 1961. The resolution on the image is good enough to zoom in and read the article yourself. There is also a small clipping there which mentions the well known film taken of a possible Nessie around that time by I think Dick Raynor (though he has since decided it was birds). 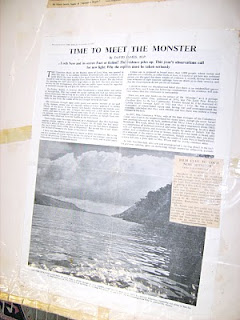