By the modern wonder of Google Earth we can zoom into that monster hunting spot on my last post. If you have Google Earth the coordinates of the pier are: 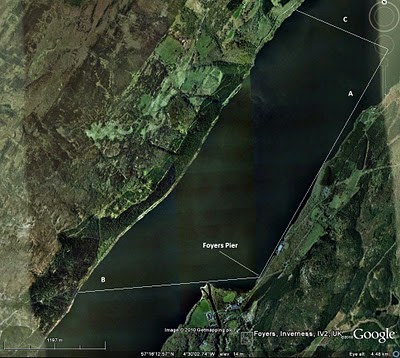 I have annotated the picture with a few items. The lines A, B and C effectively show the limits of the line of sight I would have had from that vantage point. Line B is limited by the head land to the left and extends about 1.5 miles. Line A goes along the southern shoreline but ultimately stops at the distance to the horizon which is marked by line C about 2.5 miles from my vantage point. In practise nothing much will be conclusively recordable at such distances.

All in all, I would say I had theoretical coverage of about 12% but less in practise if any meaningful evidence was to be recorded.

I was up at Loch Ness recently so a good chance to record some educational footage and describe the sights and sounds of Loch Ness as well as discuss Nessie and Nessie hunting. The building I cannot name is actually the Hydro Electric Power Station which generates 300Mw of energy for the locals.

"I have lived at Loch Ness all my life and seen nothing!"

So what about these folks who have spent decades by the loch and never have seen a sign of Nessie? Is this a proof of Nessie's non-existence?

Firstly, all the major places of habitation around Loch Ness such as Fort Augustus, Drumnadrochit, Foyers and Dores are not built on the shore line. In fact they can be quite a distance from the shoreline as in the case of Drumnadrochit. So you could spend your entire life in your town and never actually see the loch!

Secondly, it is surprising how much of the loch is not visible from the main roads surrounding Loch Ness. In the case of the south side of the loch, hardly any of the loch is visible and the north side is not great either. In fact, I would say that as you drive around on the A82 and B roads, not even 10% of the roads present a decent view of the loch.

So in the case of our local residents driving off to their jobs in the morning and coming back at a speed of 50mph or more, any view of the loch will be short lived and of low quality as they have to keep one or both eyes on the road ahead.

So perhaps the typical inhabitant spends only minutes per day looking at Loch Ness. Over thirty years that would add up to 850 hours for about 5 minutes per day (allowing for being absent on holidays or being sick). And remember this consists of glances, focussed on other objects such as boats with no systematic scanning of the surface that serious Nessie hunters would employ.

In that light, I am not surprised the vast majority of Loch Ness natives have never seen anything!
Posted by Glasgow Boy at 04:44 1 comment:

I was up at Loch Ness recently and went to Dores to look up resident monster hunster Steve Feltham.

As the Guardian article displayed outside his mobile home says, he became a full time monster hunter in June 1991. But that day I wondered if the title "Full Time Monster Hunter" would reach its 20th anniversary?

As it turned out his home was locked up. I assumed he was at the nearby Dores Inn having lunch but on further enquiry the staff said he was only at his home a few days a week. He had found a girlfriend and spent a lot of time at her place!

Well, if you are not at base every day then can you be a full time monster hunter? If this lady becomes the future Mrs Feltham would she want to take up residence at his former mobile home? I may not be an expert on women but I am pretty sure such a place would not appeal.

Good luck Steve in whatever you do!
Posted by Glasgow Boy at 14:59 4 comments:

Welcome to the Loch Ness Blog

I have followed Nessie since I was a bright eyed and bushy tailed youngster many moons ago. My views on what Nessie may be have changed but my overall belief that something big and unusual lurks beneath the waters of Loch Ness has not changed.

In this day when anything beyond so called science and fallible human reason is under increasing derision, this blog defends the thesis that the Loch Ness Monster is more than just misconceptions.

Of course we will also follow the personalities and places that have helped shape the Nessie story.