Another Book and its relation to the latest Sonar Contact 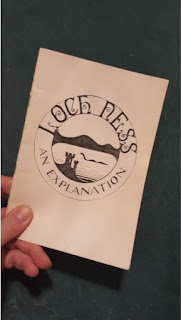 A month or so ago, I was looking for four small books to complete my collection of Loch Ness Monster books. I wrote on how I got Constance Whyte's 1951 booklet on the monster and now I have obtained a copy of Ben Sensical's 1982 booklet, "Loch Ness: An Explanation". As it happened, I was contacted by another Nessie fan who was lucky enough to have bought a copy last May and he sent me a photo of the cover for my occasionally updated article on Loch Ness Monster books. Fortunately, he was kind enough to let me buy it from him for the price it cost him, so thanks again! That now leaves me with two remaining books to find. I wonder how easy those ones will be to find?

But this booklet turned out to be a well timed purchase given the publicity concerning the latest sonar picture of the Loch Ness Monster taken by Cruise Loch Ness. I say that not in the sense that the author has anything to say about sonar, but because the theory he expounds is being expressed in some form by those trying hard to debunk and dismiss this important sonar contact. To cut to the chase, there is a sceptic by the name of Dick Raynor who was once a believer in monsters in Loch Ness but departed from such a mindset, probably in the 1980s, when scepticism began to rise in influence. This is what he recently said on Steve Feltham's Facebook group:

... there is every reason to recognise this as a sonar target, but there are lots of things that get washed down to the bottom of lakes. The wrapping from silage and straw bales could be carried down by the inflowing river currents and be buoyed up from the bottom by natural gases from the sediment. Genuine sonar target, yes. ID as a 'creature' - I'm not so sure.
How does this connect with Ben Sensical's book? Well, Ben was an advocate of the Vegetable Mat theory to explain monster sightings. This was not a new theory as it had been expounded over twenty years before by Maurice Burton in his 1961 book, "The Elusive Monster". Ben Sensical had spent some time working for the Forestry Commission which took him up to Loch Ness in the 1960s. Using his experience of forestry, he proposed a plausible theory about how various aggregations of organic materials from forests such as leaves and branches can sink to the bottom of the loch, decompose and then rise on their own methane gases to the surface of Loch Ness to form a hump like display. Add a protruding branch to the mass and you have your legendary head and neck. We even get the bonus explanation of gases ejecting horizontally to move the object forward!
Raynor's theory looks to be a variant on this original idea in that it is organic material from agriculture rather than forestry that sinks to the abyssal region of the loch. Furthermore, the material is propelled upwards, but not to the surface. It is not clear whether he is implying that the gases that subsequently buoy up the original material was as a result of the decomposition of this material or from the general sediment.
Burton and Sensical's theory sounded logical enough but out in the field, no one seemed to have ever seen any of these mats of organic matter. One or two would eventually be spotted, though I have yet to see a picture of one. At the time of Sensical's book, the Loch Ness and Morar Project began to conduct ecological studies of the loch under the leadership of Adrian Shine. One paper by them reveals the true state of affairs as regards this phenomenon:
Burton suggested that gas such as methane could bring decaying vegetation, perhaps including branches resembling necks, to the surface. In the main, the Project's work has shown little gas production in deep Loch Ness sediments. There are two exceptional areas, however; one is a small area in Urquhart Bay, and there is a larger one off Fort Augustus, where great quantities of organic material accumulate and emit gas continuously during the summer. On one occasion gas was detected from a source as deep as 97 m, which remained active for two weeks. It seems that vegetable debris, including branches, could break the surface in this particular 'Monster spot'.
So there you have it, the bottom of the loch was not productive enough to generate enough methane gas to energise the effects suggested in Burton's theory. Going back to the current sonar images, it was suggested that the object in the image could be gas bubbles on their own, minus organic debris. This image taken from Adrian's paper shows a trace which bears little resemblance to the recent image. Note this 1988 image was taken at Fort Augustus near this highly productive area. The recent image was taken miles away opposite Invermoriston in an unproductive area. 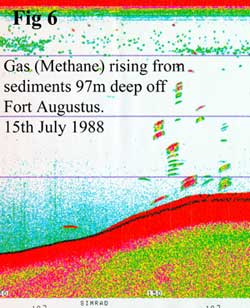 Further information on gas production was expanded upon in another paper after some work had been done with ROVs at the bottom of the loch:
It can be stated immediately that hours of television observation of the loch floor in deepwater have revealed no more than occasional twigs projecting from the fine silt. If logs are present here, they are a rarity. Intact leaves find their way into the sediment, but at a temperature of 5‑6 oC decomposition is slow. No sign of gas bubbles can be provoked by probing the sediment in front of the camera and no gas has been observed in cores or other mud samples brought rapidly to the surface. Loch Ness should not be visualized as a stagnant pond.
Note here two things. Again, gas production is next to non-existent. Secondly, there was no or little trace of anything which could register on sonar, be it tree trunks, silage or hay bales. It seems that if they even make it to the loch bottom at all, they just sink without trace, never to be seen again. We can now say the same about Dick Raynor's theory. Nevertheless, I am surprised he even suggested this theory. After all, he is put forward as an expert, so why was he not aware of this work by his long time associate, Adrian Shine? Then again, perhaps he was. While we are here, here is another paragraph from the work of the Loch Ness Project sonar work:
In shallow water, Trout have been observed to shoal on the approach of a diver or television camera. Fish concentrate inshore, within the scattering layer and in autumn loose shoals are to be found at the near surface. None has been observed in deep water. Shoals often exhibit 'tails' on echo‑sounder records, due to inter‑reflections between the fish returning over an extended period. Only one of our contacts showed any vertical extent on the record.
...
Nevertheless, contacts of interest, in terms of strength (sometimes considerable), depth and possible movement, do occur. By establishing a background against which anomalies may be judged, it is recognized that overlaps sometimes exist in all three criteria, with the presence and behaviour of the known fish population. On the other hand, superficially pedestrian explanations, such as a record‑class salmon in the main water column, deep swimming fish shoals and midwater logs, can all be seen to represent anomalies in themselves.
There you have it, anyone trying to fob off this new sonar contact as a big salmon, fish shoal or a floating log is deemed to be peddling "superficially pedestrian explanations" by the Loch Ness Project. We can now add silage and hay bales to the list of superficially pedestrian explanations.
The author can be contacted at lochnesskelpie@gmail.com