Preview of the book "Photographs of the Loch Ness Monster" 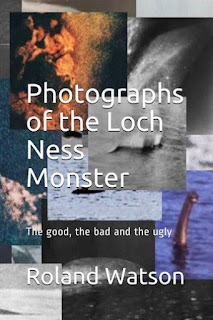 My third book on the Loch Ness Monster is now published and can be purchased at these links for Amazon USA and UK. From the first photograph taken by Hugh Gray in November 1933 to the most recent by Ricky Phillips in December 2018, dozens of pictures are recounted and analyzed and pseudo-scepticism is confronted on the written page. Having said that, not all photographs have made it into the book and those may yet await a future and final publication. Indeed, there are pictures that may as yet be unknown or lost to sight, especially those from the 80s and 90s.

The subtitle, "The good, the bad and the ugly" denotes three types of photographs of the Loch Ness Monster. The good ones which genuinely portray the large creature of Loch Ness. There are the bad ones which are natural objects misinterpreted and then there are the ugly ones which are the products of hoaxers and fakers. I may not necessarily state what I believe to be good, bad or ugly and note that the dismantling of so called sceptical arguments is an analysis of them on their own merits or demerits.

Now by way of preview, I include an excerpt from the book concerning the Roy Johnston sequence of pictures taken in August 2002. Let me just say that these photos were, in my opinion, subjected to a masterclass in pseudo-sceptical debunking and as a consequence rejected by many in the cryptozoological community. It is now time to take a fresh look at them and those who sought to destroy their credibility. Let me quote from pages 299 and 306 of the book.

EXPERTS say an amateur could never have taken the remarkable pictures. Independent snapper John McLellan claims the pictures were almost certainly taken using a tripod. He added: "The background is the same in each of the eight frames."

The third objection I will now address concerns the statement that the sequence of images suggests the use of a tripod rather than the situation Mr. Johnston describes.  This is not a cogent argument which becomes apparent if you watched the animation sequence I produced from the thumbnails. If you watch how the hillside changes throughout the sequence, it is obvious that this is not the product of a tripod solidly taking the same background throughout as the opposite hillside judders by 13% horizontally and 3% vertically.

Roy Johnston said he took the pictures from the camera hanging around his neck. Now take a look at the animation below produced from the eight images Roy Johnston took in total. Since the animation cannot be printed in a book, it is appropriate to reproduce it here. If this is the product of a stable tripod, then I marvel at the strange logic of these critics. More to the point, did they lie or were they just lazy in their assessment? You can make your own minds up on that one. Either way, these so called experts do not come out smelling of roses.

You will also notice the splash at the end of the sequence which many took as the creature re-entering the waters. That is actually not the case and does not seem to have been picked up by the various critics at the time. The splash is in fact some metres ahead of the last visible position of the creature. Compare the various positions of the creature and splashes against the hill in the background. This would suggest the animal merely slipped into the water and the splash is in fact tossed up from some subsequent and invisible underwater motion.

You may also note that the progression of the creature as it submerges in comparison to the hill takes it on a course to where the splash eventually appears. That would appear to be a strange thing to do if it was an alleged CGI overlay sequence.

I will say more about this sequence in my book, but this was an argument confidently put forward by Dick Raynor when he allegedly assessed these pictures. He dogmatically stated other arguments against these pictures which made me wonder how equally fragile those arguments were? You will find out more about these and the hatchet job employed by the gutter press in my book.

So, if you feel you have benefited from this blog over the years, then show your appreciation by buying this book. Have an enjoyable read!