Up at the Loch again 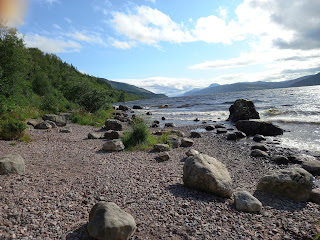 About six weeks after my day trip to Loch Ness, it was time for a longer visit to Britain's largest stretch of freshwater. We pitched up at the Foyers campsite where we have been going for a number of years now and always found a great place to stay. That site is up for sale and we wish Donald and Lyn Forbes well in their retirement and hope the good work continues under new ownership.

Now I do not normally go up north in July as I anticipate a surge of tourism crowds and it is generally hotter for moving around. As it turned out the crowds did not turn up and it looked more like May than July to me. Well, a lot of foreign tourists did not make the trip this year and the staycation people may have gone abroad in bigger numbers than I thought.

As usual, I took a walk along Foyers beach to take in the views but also this year with a task in mind; as will be explained later. Back in the tent as the sun descended, I read my usual chapter from Ted Holiday's 1968 book, "The Great Orm of Loch Ness". The chapter was "Foyers at Sunrise" which describes Holiday's first trip to the loch in August 1962, a spartan affair in an old van with fishing rods and frying pans which ended with Holiday catching his first sight of the creature from Upper Foyers.

The "orm" was down below in a small estuary beside the old aluminium works, but today I wondered if there was any chance of recreating that view due to the surge in growth of the intervening trees and other foliage. That depends where Holiday was standing, but the loch is not as accessible as it was sixty years ago.

One thing to check on this initial walk was that curious depressed area of grass I had found almost exactly a year before. The first photo shows what this large area looked like then and the second what it looks like now. Clearly some large weight had laid upon it a year ago and at some point it recovered its normal position. Actually, it looked a bit threadbare compared to last year. No worries, I jokingly mused, Nessie's toxic slime must have killed them off. 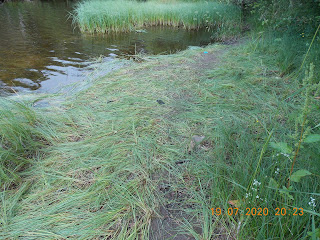 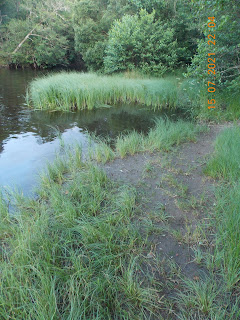 The following day, the hot and humid conditions continued as we took a leisurely drive up to Inverness, stopping at various points to watch the loch and consuming Pot Noodle for lunch. This was what is traditionally considered, "Nessie Weather", though how much of this is due to monsters or humans is unclear. More people are looking at the loch in good weather and the surface conditions are far less choppy, though there was a cooling breeze travelling up the loch.

In Inverness, we visited some bookshops and took in the reopened Museum. It has to be said that books on the Loch Ness Monster are hard to find in the largest centre of population just eight miles from the loch - apart from the usual kids' books. Even a visit to the well stocked Leakey's Secondhand bookshop had nothing. No Holiday, no Dinsdale, no Whyte or Gould (though their Abebooks account did have two Whyte books). But go online and you will find everything you need.

The next day we did a circuit of the entire loch from Foyers, through Fort Augustus, Drumnadrochit and back down via Dores. Stopping at Kilchuimen for supplies, I had one task which involved walking along the River Oich. There is a path you can take which lies tight between the river and the petrol station. Just remember to bring a machete at this time of year. Once the towering but derelict bridge arch came into view, I remembered Ricky Phillips.

I wondered if the branch he had photographed about two and a half years ago and palmed off as the monster was still there? Yes, it was as the photo below demonstrates. It is right in the centre and the zoom in shows it more clearly. As it turned out, the focus of this trip was all about famous hoax pictures. 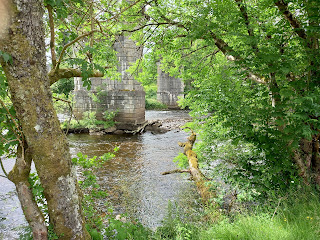 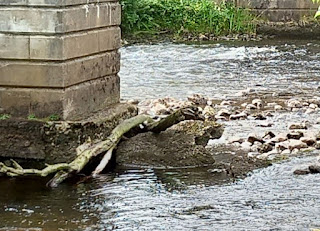 Once we were back at base, there was work to be done. The waders were donned and the Garrett Ace 250 metal detector was taken out of the car boot. What has this to do with the Loch Ness Monster you may ask? The answer is the Surgeon's Photograph and the alleged toy submarine employed by Marmaduke Wetherell. Back in March, I had written an article suggesting that the site for this hoax was the western end of the beach at Foyers which I had walked along many a time.
There was therefore two questions to answer. Did Wetherell leave any pieces of the toy sub when he crushed it underfoot and how detectable would such fragments be today, eighty seven years on? My assumption was that it was a long shot that anything would be found, but there was only one way to find out and start metal detecting.
Since I was searching in the waters of the loch, there was no need to seek the permission of the owner of the beach. Fortunately, the Garrett detector is waterproof up to the control unit at the top. That gave me a couple of feet of water to work with. Since Ian Wetherell stated that his father had stepped on the sub as the water bailiff approached, it did not sound like too deep a waters.
I must admit I felt like that chap, Gary Drayton, from one of my favourite programmes, "The Curse of Oak Island". Would I manage that "top pocket find" and draw the curtain on the infamous picture? As I kicked off and swept the coil above the submerged rocks, the detector began buzzing almost right away. The rocks underfoot are quite big on this beach, going up to a foot across, so it was more about moving rocks than digging.
I reached down into the now cloudy waters and moved the rocks, retried the coil, gathering up handfuls of gravel for testing until I pulled up a very rusty sliding bolt latch. This was followed by hits on some metal bars, a door hinge and a fly tackle. The Gary Drayton effect had moved more onto what some of these objects were. They would send them off to a specialist blacksmith, I had to make my own educated guesses. 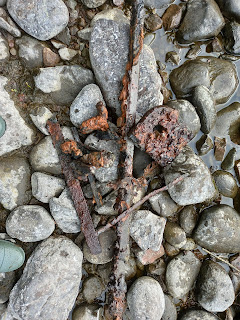 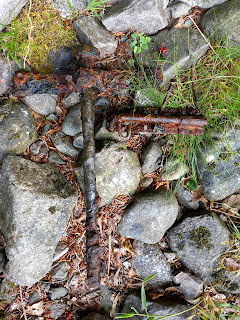 I suspect some of this was related to farming equipment, as the fields above used to be farmland. Fragments may have made their way down the hill from the fields above and kids just picked them up and threw them into the loch over the years and decades. How old the items were was not clear. But their thickness certainly helped preserve them over the years. What was also surprising was that they were buried under quite large rocks. I just expected those rocks to not move and things to lie on top.
So nothing related to the Wetherell hoax found, but I did not cover all the possible areas. After such a long time, my expectation was that perhaps the wind up motor unit would survive the longest, but of course, we do not know what was left behind as the Wetherells headed back to London. But all in all, it was a worthwhile exercise.
The next day, everything was packed up and we slowly headed back south. The weather was brilliant throughout, I had also done some reconnaissance on where to place trap cameras on our next visit and the metal detector as a device performed beyond my expectation, though what else one could employ it for in Loch Ness research is not so clear. Any ideas are invited.
As an aside, I listened to some of Scott Mardis' "Haunted Sea" chats on the "Monster X" podcasts in my tent in the evening. I would recommend his interview with veteran Nessie hunter, Henry Bauer and his chat with Ken Gerhard here. All good stuff.
The author can be contacted at lochnesskelpie@gmail.com
Posted by Glasgow Boy at 14:44 157 comments: