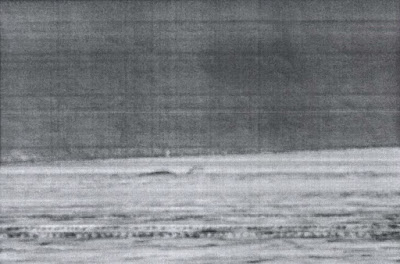 I recently came across some issues of "Animals and Men" published by the Centre for Fortean Zoology which is run by veteran monster hunter, Jon Downes. It was issue 35 that caught my attention with a series of photographs allegedly of the Loch Ness Monster. I think it was published in early 2005, though there is little details about when these pictures were taken. Jon says the following in that issue:

A couple of months ago the CFZ were e-mailed several pictures purporting to be of the Loch Ness Monster. The person who sent them did not leave a name and did not reply to e-mails requesting further information. The sender said that they had taken the shots from a lay by above the loch. They had been driving along and saw something in the water. They pulled over and took three pictures before the creature disappeared.

The pictures seem to show an object with the classic "Nessieform" shape, a humped back and snaky neck. A road is clearly visible in the background as is a buoy. Richard Freeman showed the pictures to the gentleman who took the Loch Ness film shown on our website.

He believed them to be fake. Firstly the angle at which they are taken is too low to be from a lay above the Loch. They look as if they were taken from a boat. Also the width of the visible water is to slight for it to have been taken from were the witness said it was.

So there it stands. Without further information there is little we can do but it appears that, like several recent pictures of "Nessie", that these shots are fabrications. 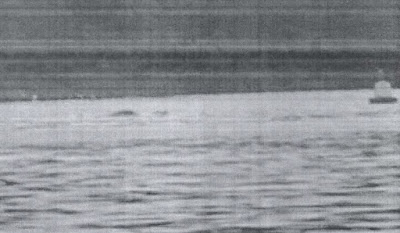 I asked Jon about these pictures, but he says he could no longer remember anything about them and he could not find the originals in his files. Moreover, three pictures are mentioned but we have only two. The quality of the pictures are poor due to the print process and I suspect the originals looked better than what we are left with here. So we have various unanswered questions which I would prefer to have answered before forming an opinion.
Aside from obtaining better pictures (perhaps Richard Freeman could help), there is the mystery person who gave their interpretation that these were dubious due to the alleged angle of view versus where the observer was meant to be. You can see a navigation buoy beside the alleged creature and that looks like one of the buoys photographed below which are at the narrow top end of the loch at Lochend. That would be consistent with the closeness of the opposite shore. However, the text says a road is visible on the other side, but there is no road along that opposite shore. The analyst of the pictures also claims the loch is not wide enough to match the stated location. 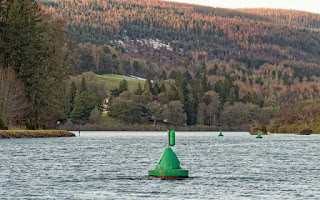 These buoys I think are no higher that six feet which would mean the alleged creature is showing about ten feet out of the water if it was as distant as the buoy. That could translate to a potential overall fifteen feet of total length. There is that classic long neck and single hump to this picture with the other picture showing the presumed neck almost submerged.
So, can we find better versions of these pictures plus the third unpublished image? Who was the person who had previously filmed the monster prior to 2005 and was deemed a suitable person to analyse these pictures? Until we can get some further information, I will suspend judgement on these photographs from fifteen years ago.
UPDATE
Further information from Richard Freeman of CFZ suggests the object in the photographs is indeed of the fifteen foot size suggested and is long necked with a single hump, but it is man made. I refer to "Lucy the Plesiosaur" which was an animatronic plesiosaur created and used at Loch Ness in that timeframe of Summer 2005. The model was used in a Channel 4 documentary which I now recall watching from that time and was swum in front of various people to note their reactions. Here is a BBC article on the subject dated August 2005. 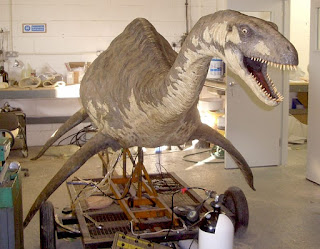 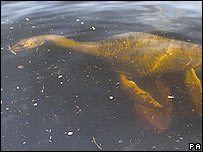 The model allegedly sank to the bottom of the loch, which reminds me of the photograph below which had a parallel monster model history. 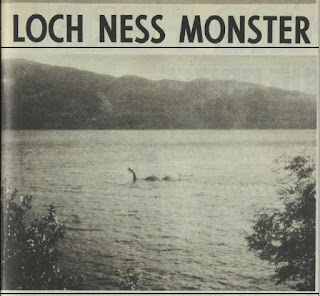