Eoin moves to the new Webcams

The new webcams from Visit Inverness and Loch Ness went live eight days ago on Monday 29th August and I wrote a piece on them a day later. So what is not to like? More webcams to watch, better quality, and closer to the action overall. I did however warn that the days of blobby Nessies were not necessarily over. Nevertheless, I recommended watchers such as Eoin from the old webcam moved over to the new ones.

Just three days after the webcams launched, Eoin emailed me claiming what could be his first sighting on one of the webcams.

To be fair, he did not outright label it as a monster sighting, but rather described it as something large round and black which arose from disturbed water then into a wake before submerging. This happened at 1118 on September 1st on the Shorelands Lodge webcam which I had indicated looked one of the best situated cameras. This is one of the images he sent me and you can also watch his video at this link. 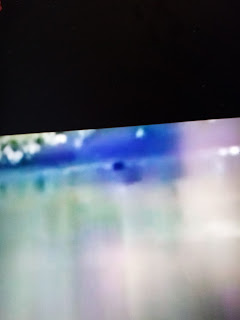 There are several things I want to say about these pictures and the accompanying video. The first is the poor quality of the video and images. Now this is not the fault of the webcam, it is because Eoin continues to use his mobile phone to record images. The glare bouncing off the monitor into the mobile lens, the shakiness of the video and the unfocused images all conspire against assessment. Why is this happening? There is a snapshot feature on the webcam to capture quality images, here is one I took a few days ago. 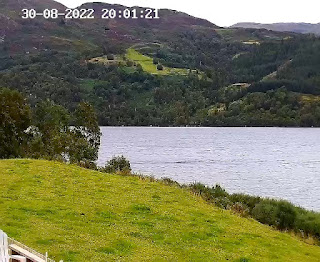 The difference is obvious, mobile phones are bad enough as recording devices at the loch and are no better here. The result of this extra recording layer is more loss and corruption of data introducing artefacts into the original images. Neither is this acceptable when it comes to video. There are various free software packages you can install to capture video from your monitor.

I installed one called OBS Studio which I downloaded from a review website and had it running within the hour and it recorded the full screen video of the chosen webcam perfectly. This is what is required, not mobile phones which introduce uncertainty and doubt. The video and photos given cannot be properly assessed due to the problems they introduce. I urge Eoin to start using these and ditch the mobile phone.

Now I understand that this was taken on a work computer by Eoin and so there may be issues installing video recording software. There should be no excuse using the snapshot facility. The solution is simple, start using the home computer or perhaps the mobile phone has a use here as it can be watched at work and doubtless there is some android or apple app which can also record screen video.

As to what is in the video and pictures, I cannot tell because of the quality of the images. That there is water movement is not in doubt, but the dark object is seen to disappear after one frame indicating an artefact. Blockiness has been introduced into the mobile video processing, so observe the vertical blocks on the general water surface and how they flicker in and out of view as the video progresses.

This may not have been observed by Eoin at the time and may be errors introduced when the video was compressed for storage. Either way, the mobile phone video recording layer needs to be eliminated. But all is not lost, if something anomalous can appear at the far end of the webcam, one assumes there is an equal probability it will appear at the near end of the webcam and the usual blobby issues will vapourise (once the mobile is dropped).

If that never happens, we can assume the far end objects resolve into recognisable objects which are not going to be presented as evidence of monsters. Be that as it may, I encourage webcam watchers to continue their observations, just as a lochside watcher would not contemplate using a camera or binoculars with smudged or scratched lenses, so the mobile phones must go.