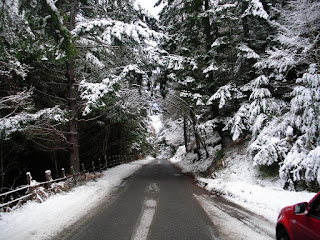 There was a time when I had a monster hunter's dream and that was to one day retire to a house overlooking the shores of Loch Ness. The plan was simple enough. When my working days were over, I would downsize the three bedroom bungalow in Edinburgh for a cosier two bed affair on the southern shores of Loch Ness. But not any house would do, it had to have certain specifications. For one, it really did have to be beside Loch Ness and that excluded the main towns of Foyers and Dores. The little village of Inverfarigaig looked more promising, but a house that was that intimate with the loch is not so common.

Of course, it could not be that close to the loch else one bad stormy night could see the loch lapping at your back door. It some sense I felt like that old rascal, Aleister Crowley who scoured the same region with a specific tick list before he settled on Boleskine House! Once found and bought, I could settle into life servicing the various cameras and tests like some gardener tending his prize roses or some other utopian analogy.

So you see, I was formulating a plan until reality intruded. One of my older relatives would say how the "incomers" would come up for their first summer and be gone after their first winter. What that meant was the winters could be so bad that may wish you had never made the move in the first place. Allied to that was the very short days of sunlight just to make you that little bit more depressed as you tried to contemplate the beautiful snow laden scenes from your temporary prison.

I like to peruse the Loch Ness community facebook groups just to get the local news and views. If there is one subject that dominates such forums right now is the treacherous road conditions that prevail over a Highland winter. Such forums will have posts about this road being impassible and another being passable with care. People will also post for road reports before they attempt any travel.

Sure, the snow ploughs will (hopefully) come through after 9am and life is better if you can afford a 4x4 "chelsea tractor" and let's hope the snow isn't blown back onto the roads after the plough has done it work! Likewise, pray for an understanding boss in Inverness when you tell him you're blocked in again and won't be at work.

I guess those who made the effort to come up all the way from England will generally tough it out and think of those beautiful summers by way of compensation. As for me, I just wondered how folk who had retired cope with all this. Stuck in their houses and even more infirm on their feet on ice and snow. And if you have a sudden illness, how is that ambulance from Raigmore hospital going to get there? Do they have helicopters? 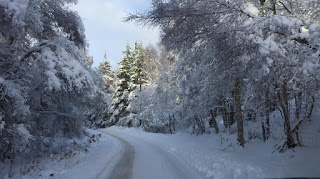 Oh well, perhaps it was best to retire to Loch Ness, but not that close. Perhaps Inverness, Nairn or Culloden? Only time will tell but for now I had a comical vision of Nessie gambolling on the snow choked roads, confident in the knowledge that no human can get near her by design or luck!