The latest Nessie pictures are out and the obvious question is it Hoax, Misidentification or Nessie? I wouldn't like to say but the account by the witness Richard Preston is as follows from the STV website:

Richard Preston, who has redesigned the castle grounds on the loch’s southern shores, snapped the image of a mysterious three-humped object on the water.

“I am not saying it is the monster. But I don’t see any reason why it cannot be some sort of a sea-going beast,” Mr Preston said.

The 27-year-old Yorkshireman, who is based at Broughton Hall near Skipton, was working at the castle when something close to the opposite shore caught his attention at about 3pm. “It was a glimmer,” he said. “It was like a reflection. The rest of the water was still and dark. It was quite odd.”

Mr Preston snapped a series of images on his mobile camera but when he turned around, the mystery object had disappeared.

“I was gobsmacked,” he said. “I have been working here for the last two or three years and have never seen anything like it.”

Naturally, the sceptics hold Mr. Preston to his initial words and say it is a reflection of the house on the opposite side of the shore (but why is the other house not reflecting?). The width of the phenomemon even looks the same as the house. The shadows on the grounds of Aldourie Castle also indicate the sun is somewhere behind him making the reflection hypothesis plausible.

The other point to note is that the object is white and Nessies tend to be dark in colour. Okay, pack up and go home? Well, maybe not quite.

One of the snaps (three I think) is below (copyright Richard Preston). The second is my zoom in. 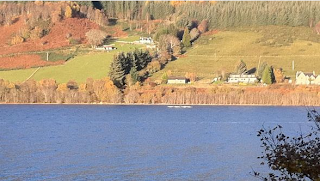 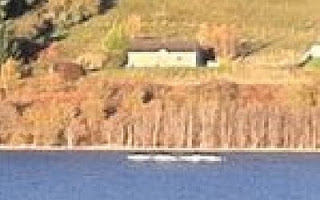 The zoom is quite pixellated but its shows two things. First is the three part nature of the phenomemon which has prompted a three hump interpretation and secondly the the three dark lines which are seen above the "humps" from the observer's point of view suggested as shadow by some.

Now one could presume the dark lines are the house roof being reflected but my rudimentary physics suggests that should be "below" from the observer's point of view. But then again since the sun is shining behind the observer then that is where shadow would be if it was a raised object.

Can a reflection of a fairly uniform structure like a house produce this segmented effect? No doubt a critic would say "yes" via some mirage effect adding a shimmer effect. There is always a plausible yet perhaps not probable explanation for these things. Mirages do occur on Loch Ness. It is all down to when the picture was taken and the ambient weather conditions.

As for the shadow effect, This needs further explanation beyond the obvious one of a real shadow cast by a real object. Over to the sceptics who specialise in optics!
Posted by Glasgow Boy at 03:07 3 comments: