It is one of the classic Loch Ness Monster accounts from the 1930s involving Inverness man and angler, John MacLean. This sighting was covered on this blog back in 2015 and you can read that to get the basic facts. John himself stated that he was fishing from the shore near the mouth of the Altsigh Burn when the monster surfaced about twenty yards from him. It appeared to be in the act of swallowing something which he presumed was one of the abundant fish from that area.

The creature resurfaced further west displaying itself from tail to head as in the contemporary sketch above from The Scotsman newspaper from July 1938. The six minute sighting ended with the foremost hump inflating in an extraordinary manner before it submerged for the final time. All in all, a super sighting which surely would leave the sceptics scratching their collective heads?

Well, the answer to that is no as there is apparently no sighting of the Loch Ness Monster, no matter how close or detailed that cannot have a mundane, ordinary explanation arbitrarily assigned to it. To this end, one leading sceptic told me personally it was clear that MacLean saw a mere otter. This "fact" was communicated to me when I knew that another leading sceptic had assured us all that the sighting was nothing more than a group of cormorants. That opinion was presumably formed on the tenuous grounds that MacLean had stated that the creature swallowed like a cormorant. It seems we have a choice of what John MacLean "really" saw.

To get to the main point, when it was pointed out that John MacLean estimated the length of the creature to be eighteen to twenty feet while otters and cormorants are an unspectacular three feet long, I was told he had got his estimates wrong because he was looking across a very foreshortened loch due to him being right on the shore and not from an elevated position. Now there is a grain of truth in that and this is the danger of sceptical interpretations - part of it is based on something people would admit to be sensible. However, the devil is in the details. I took this picture near where John MacLean was to demonstrate the foreshortening effect. It is actually taken at the back of the youth hostel looking across the loch from the beach. Would one have trouble trying to estimate the length of that stick out in the water? You might, but I would not have as I was there. The foreshortening problem comes if such an object is located further away towards the opposite shore a mile away. Looking at the water in the vertical axis, there is more nearby water visible in the bottom three quarters of water than there is of distant water in the top quarter.

The conclusion is obvious, the problem of estimating distance and therefore size is proportional to how far away the object is. It is not a binary solution. If the object is close to the observer, foreshortening is a minor issue. If it is three quarters of a mile away, the margin of error increases greatly. So the question is how far away MacLean's creature was? The sceptic says it was a long way off, despite MacLean's experience by the loch.

The problem was recently resolved by an e-clipping sent in by Gary, a regular reader. He emailed to me an image from the Radio Times from 1938, just weeks after John MacLean's sighting. The BBC had sent a team out in their radio van to investigate the phenomenon of the Loch Ness Monster which included interviewing local experts and eyewitnesses. Now there is a program I would love to hear. That page gives us our first look at John MacLean alongside the BBC interviewer. 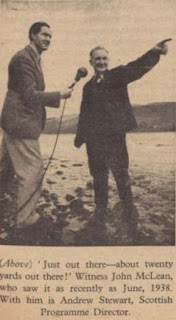 It is always good to get a contemporary photograph of an eyewitness, especially at the site in question, but that is not the only reason why this picture is helpful. Look at the direction he is pointing in and its orientation to the loch behind him. Since we know he was fishing by the mouth of the Altsigh Burn, we can project a line of sight onto a map of the area. The 20 metre scale at the bottom right of the map is roughly the same as 20 yards and gives you an idea of the arc along which the creature may have appeared. 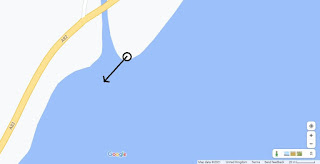 John MacLean was not looking out over to the far side of the loch, he was looking across the mouth of the river where he was casting his line. A look at my stock of trip photographs gave me a shot of the view across the estuary where I stood close to where John did. The nearest headland point is about thirty yards away and the more distant one over a hundred yards away. The creature he saw lay in between these points, but it is more likely to have been closer to the nearest headland. 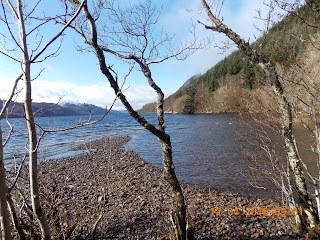 The proximity of the headland you can see which was opposite from John MacLean excludes any chance of observational errors due to foreshortening. There are multiple frames of references from which to deduce distances as John's eyes darted between monster and locality. Twenty yards puts us about halfway out where the river meets the loch, a perfect vantage point.

So, a main plank of sceptical objections is removed. The beast sketched below at that time was no otter and no cormorant. Unless one wishes to pursue the view that John MacLean was an outright liar, you've got yourself an excellent view of the Loch Ness Monster seen by an experienced witness at close range. 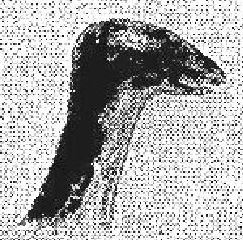