By way of a belated trip report, I was at the loch the week before the eDNA results were announced. That was just the way things had fallen, though given the wet weather, perhaps it was better to have gone the following week. The River Foyers beside my campsite was in full spate as the waters flowed down from the hills to rise almost up to the bridge that connects that part of Foyers with the main road higher up. 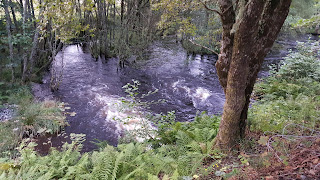 The rain prevailed for most of that weekend and that rather curtailed activities. To add to that low mood, somebody had nicked the one trap camera I had left at the loch over the summer! Clearly, the thief had found no Nessie pictures to profit from as nothing has appeared in the media. Fortunately, trap cameras are not that expensive, so it will be replaced in due course for the next surveillance.

Nevertheless, things did get done. I had brought a pair of waders with me and used them to wade over to Dinsdale Island with resides at the bifurcation of the River Foyers as it enters the loch. This islet is not labelled as the second island of Loch Ness as it forms part of the river complex and not the loch. In his "Project Water Horse" book, Tim Dinsdale said he conducted watches from the island over the months straddling 1966 and 1967. Below is a photo from that book with Tim on the left. 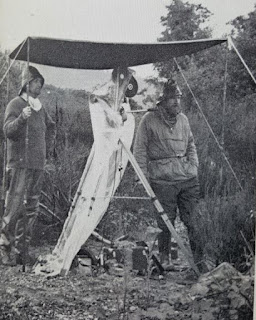 Now from memory, I had the impression that before Tim left the island for good, he buried a pair of old brogues on the island, awaiting someone to find them years or decades later. Could I find these iconic items? When I re-read the account from "Project Water Horse", Dinsdale states he left the boots on the island in late 1966 and returned in 1967 to find them gone. So he didn't actually say he buried them and he assumed the winter storms had buried them.

I thought it more likely the storms had swept the boots out into the loch and so I had little confidence of finding these fifty three year old items. But I did look around and found some old fragments of various items. Whether these belonged to the great monster hunter himself, I may never know, but it was an interesting exercise in Nessie archaeology. Looking around the shores near Foyers, I also found this interesting alignment of stones. What photo does that remind you of? 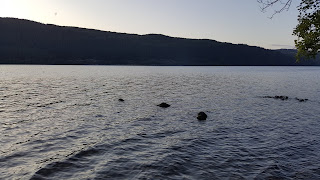 I also participated in the making of a trailer for a potential Nessie documentary. The film maker and I met up and ran through some shots and interviews at Borlum Bay. This involved some demo shots involving the setup of a trap camera. His focus will be on the personalities behind the story and hunt for the monster rather than whatever one may think the creature to be. He was next off to see Adrian Shine and let's hope he gets somewhere with his promo trailer as such as documentary has yet to be made.

Speaking of Adrian, I met up with the Edinburgh Fortean Society who were up there for the weekend and I went along to have dinner with them at the Clansman Hotel. As it turned out, Adrian had been invited along with Charles Paxton to the meal and therein lay a conversation. As we got into chatting about this whole Loch Ness thing, Adrian suggested my blog was a philosophical exercise more than anything else. I don't think he was being complimentary when he said that, but neither was he being derogatory, more an observation on his part.

What did he mean by that? I should have asked but I would say he implied my articles which addressed the question of whether a large, unknown creature exists or existed in Loch Ness skirt round the issue by reframing or questioning questions. To wit, as Adrian said, "Science has found no big animals". Whatever you may say about the various organised endeavours, no definitive proof has been found. Ultimately, a living or dead specimen, part or whole, is normally required by zoologists.

But beyond that, other "proof" is often in the eye of the beholder. When I asked Adrian about the anomalous sonar hits from Operation Deepscan in 1987, he suggested they were side echoes. if one wants to be philosophical about the vagaries of empirical knowledge, he seems to have gravitated between, echoes, seals and unknown. Here is the philosophical point, Adrian and others can go around and say what they want about various proofs, but they can't call their opinions ... facts. Perhaps that is more epistemological than philosophical. 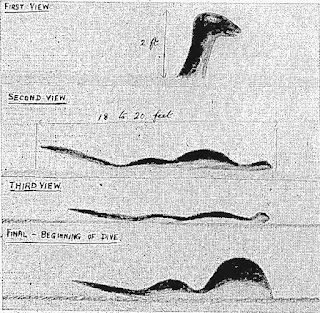 Wishing to solidify this line of argumentation, all the photographs and films have been dismissed in like manner, which leaves us with the large number of eyewitness testimonies. At this point I introduced the matter of the John McLean sighting of 1938 (above). I raised that because I regard it as a top class sighting. The witness claimed he saw the creature from sixty feet and was a local angler, suggesting he was used to what Loch Ness can throw at observers.


He also says he observed it for a full six minutes. What's not to like? Surely, the only way out of this is to call John Mclean a liar (as others have been forced to suggest)? But, no, Adrian confidently asserted that Mclean had seen nothing more than an otter feeding on fish! This is despite McLean relating to Ted Holiday in the 1960s the following words:

I.: Did you feel afraid of it?


J. M.: Well, to tell you the plain truth, I didn't know what I was. I thought it's neither a seal nor an otter. It never dawned on me at first about it being a monster or I'd have run up to the Half-way House and got a camera and took a snap.

Yes, John McLean categorically stated it was no otter, but Adrian, eighty years on says he is wrong. When I pointed out that McLean had estimated the size of the creature to be 18 to 20 feet long, this seemed to matter not to Adrian. His reply was that size and distance estimates go out of the window when the eyewitness' view is level with the loch. Even if you give minimal credence to this theory, can an experienced loch observer get it wrong by a factor of 6 to 7? Methinks the burden of proof lies with the otter theorist, not me or John Mclean.

At this point, I told him I had been to the spot and looked around and there were enough frames of reference to judge size and distance. Since John Mclean was at the mouth of a river, the opposite bank provided distance cues. I show the photo I took myself as evidence of this point. All it required was for the creature to turn up in that general zone. Adrian did not reply to that point. 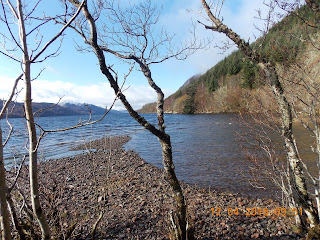 Furthermore, when I asked about the strangely inflating hump drawn above, just before the creature dived, Adrian told me this was nothing more than the otter's back arching into the water. You may forgive me for thinking this bears little resemblance to the drawings of John Mclean. Well, no matter, just say John McLean didn't draw it properly and all is good again.

Is it again philosophical to suggest sceptics are playing fast and loose with eyewitness testimony by always insisting the perception was bad enough to mis-see monsters but good enough for sceptics to deduce the "real" object? I didn't say it at the time (I wish I had), but I remembered another Loch Ness expert, Tony Harmsworth, had solemnly declared that McLean had seen nothing more than some cormorants. This is in conflict with Adrian's otter. I looked at Tony's reply (below) in a previous article:

The long neck fits in with cormorants. It is well known that people overestimate sizes over water. The body drawings are typical of boat wakes or groups of birds apart from the last drawing which is a bit of a mystery.

So, we have two leading sceptics both confidently asserting their positions. Of course, the fact that they contradict each other implies one or both cannot be so confident. Is it being too philosophical to suggest this is all just a shell game? Perhaps one will eventually get in line with the other to present a united face (as Tony was once obliged to do regarding his at variance account of how the Lachlan Stuart photo was allegedly taken).

The other issue that Adrian thought important was the tail that was visible to John McLean (see sketches above). He suggested this was out of kilter with Loch Ness Monster accounts and was too unusual to be considered. Quite why Adrian was concerned about the integrity of the eyewitness database was a bit ironic as he has no regard for it at all as evidence. Of course, he was directing that question to me as one who does regard it.


But there is no problem and I counted about 5% of all eyewitness accounts including descriptions of a tail. There may be more which are just perceived as a shallow outlying hump. Tim Dinsdale's examination of the best accounts puts it slightly higher at 7% (I think, no book to double check here). So what exactly is the problem here? Yes, they only come in at one in twenty accounts, but they happen!

There was one thing I agreed on with Adrian and that was Ronald Binns' recent claim that he effectively mentored Adrian and others into a final sceptical position. It was no surprise to me that Adrian flatly denied this. I would generally take what Adrian says over Ronald any day. So let us end on that point of harmony, but remind readers once again not to accept everything they hear from the sceptical class.