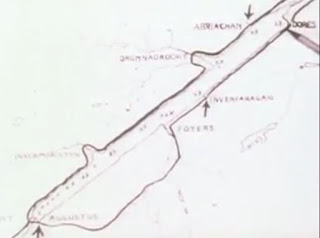 I have returned from a recent trip to Loch Ness on which I shall speak more fully some other time, but there was enough going on to split off some of those activities into several articles. I will begin with a trip we made to Borlum Bay on the southern extremity of the loch. To those well versed in Loch Ness Monster lore, this spot will be indelibly linked with the land sighting of Margaret Munro on June 3rd 1934, when at about 6am she watched a huge creature moving on the shore close to Glendoe. My main article on this can be read here. 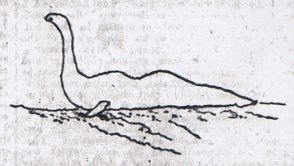 Before I headed north, a fellow Nessie enthusiast, Doug, referred me to the above map which featured in a 1936 newsreel produced by Scottish Film Productions entitled "Things That Happen". It shows a map of what it calls recent sightings, although they are somewhat selective in only including three land sightings. We have Arthur Grant's late night monster from January 1934 at the top right, Margaret Munro at the bottom left and, well, another land sighting which is pinpointed at Inverfarigaig.

Now one presumes the newsreel is referring to the Spicers land sighting of July 1933, but this had been placed nearer to Whitefield, four miles further north on the same road by researcher Rupert Gould. It could refer to another land sighting, perhaps that of Mrs. T. MacLennan or Mrs. Reid from August and December 1933 respectively, but why give these priority over the most famous land sighting of all? Perhaps George Spicer finally settled on the shore near Inverfarigaig, we may never know.

But zooming in on the Munro area, the map maker got it right as they place the event, not on the shore nearest to Kilchumein Lodge, where Ms. Munro was, but further north near the Alt Na Dubhair stream. That may have been the end of this particular observation, but things have changed at Loch Ness allowing a re-investigation. This became apparent when we arrived at Borlum Bay to do some drone work.


I will get to the drone footage at the end, but a look to the right of Borlum Bay revealed a new tourist path built by authorities to complete a walk up to Loch Tarff (details here). This meant I could finally access by foot the spot on the beach where the monster hauled itself ashore. By that I do not mean I know the exact spot, but you could be sure you had walked past it. 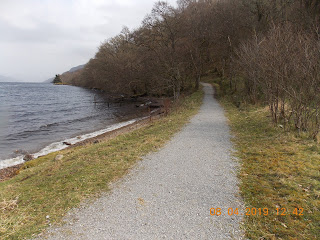 The first obvious thing to do was to locate the Alt Na Dubhair stream which was easy enough as we came upon it in a short time and the two photos below show it above the path and below the path as it empties into the loch. At that time, it was not much more than a trickle as the rainfall had not been abundant over the last few days. 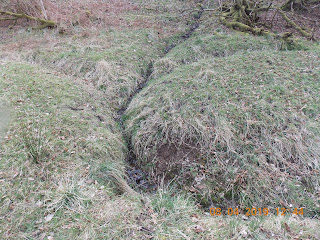 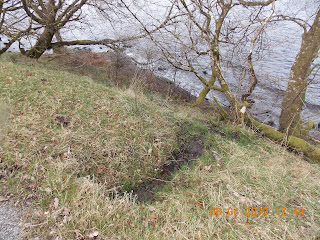 The beach width varied between mainly narrow and sometimes wide as the path was walked to the end of the beach and one could imagine the creature landing at any point though the wider points seemed more likely to me. My favoured spot was where the stream entered the loch as the beach widened out a bit there (as you can see in the above photograph). There was quite a bit of tree coverage along the way and I imagined it was probably similar 85 years ago, if not more given it was further into the growth season.

This suggested to me that Margaret Munro was right in her assertion that the beast was partially out of the water as any further into the beach would result in it being obscured by the bushes and trees. Indeed, a partial landing may have only been possible for such a large creature due to trees obstructing its way. This also made me think of the unsatisfactory seal explanation as a smaller seal could easily push further in and be lost to view. 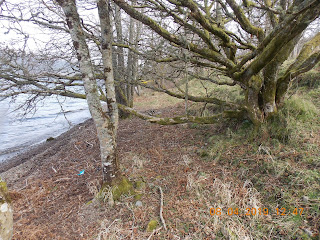 Having surveyed the now accessible area, it was back to the main shoreline for some drone work. The main task was to fly the drone at a height of several hundred feet and point its 4K camera down at the surface of the loch looking for any unusual activity. The video below shows the general panorama as the drone panned 360 degrees above the bay and then onto the main work of recording the surface water below looking for signs of unusual activity just below the surface.


Nothing was noted on this occasion though twice the drone was troubled. Firstly, several seagulls flew near the drone, perhaps thinking it was one of them or an intruder. To avoid a collision, a quick drone ascent was required until the birds flew on. The second incident was more troubling still as I manoeuvred the drone over the trees where Margaret Munro saw her monster and then I looked down at the streaming video app on the remote control.

On looking back up, the drone had disappeared from view and the remote control had lost contact! Now at that distance, it was rather dot-like to begin with, so had I just not focused properly or had it dropped below the tree line, perhaps catastrophically? There was only one thing to do and that was to hit the RTH button.

I had never used the "Return To Home" button which records the drone's take off coordinates via GPS and returns there on this button being activated. I pressed it and waited for perhaps ten seconds before a whirring noise came over my head and there was the drone hovering above me! No large creatures were seen swimming below the surface, but at least I will return another day with the drone to try again.

It has to be noted that drone surveillance is quite energy intensive as the drone carries a brick like battery that gives no more than 30 minutes flight time. One wonders how much energy is required just to carry the battery up that high! I have two batteries giving one hour of flight time per day of operation. I hope to ramp up flight times during the next trip, but the main issue is finding a safe place with good landing spots. When I was at the bay, a young family paused nearby before going up the new path. I had to cease operations while the kids played on the beach.

Finally, I pointed out last year that the house from which Margaret Munro watched her creature had been demolished. Gone is Kilchumein Lodge and its history. On this return visit, you can see the new house nearing completion. I wonder what sightings of the Loch Ness Monster will come to pass from this new location? 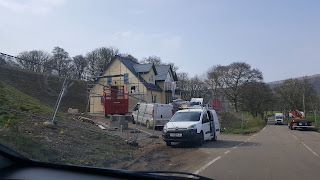