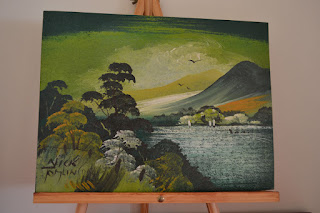 Here's one that is going on eBay just now. It was painted in the 1970s by Preston artist Nick Tomlinson and its yours for forty quid. Look close enough and you'll see Nessie! When I see a painting like this, I check the database to see if the artist was a witness to the monster and went off to paint their experience. In this case, I found no reference to this artist.

Now that may not be unusual in that regard, but Nessie popping up while the artist is at the loch painting is a scenario I have only two claims for and one was an alleged painting done in the 19th century. The person who made that claim said they had scans to prove it but never sent me them. Whoever it was didn't come good on that, so we move on.

There is one painting I would like to track down and that is one of the Loch Ness Monster that is over eighty years old. It is mentioned in an advertisement from the Dundee Courier of 20th September 1934 and is shown below.

The ad seems to imply that the artist painted a sighting of the creature in progress and this would obviously be of great interest to Nessie cryptozoologists. Where this painting is now is anyone's guess (unless a reader has special information). A first step would be to identify the artist and candidates for that period would be Constance Whyte and Alistair Dallas. However, this does not sound like one of them. Another opportunity for detective work it seems.

But hitting dead ends on Nessie investigation is enough to drive you to drink. So I would likely find this beer mat useful! 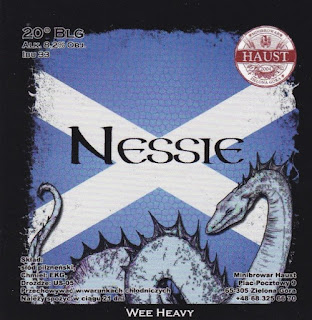 
The author can be contacted at lochneskelpie@gmail.com

The recent talk about giant eels at Loch Ness brought to mind a couple of old clippings I had intended to post.

The first is taken from the Whitby Gazette dated the 28th September 1906. As I began to read, I was beginning to think we had a 1906 Nessie report on our hands, but read on. 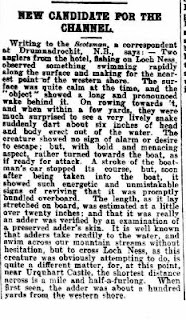 Writing to the Scotsman, a correspondent at Drumnadrochit, says: — Two anglers from the hotel, fishing on Loch Ness, observed something swimming rapidly along the surface and making for the nearest point of the western shore. The surface was quite calm at the time, and the "object" showed a long and pronounced wake behind it. On rowing towards it, and when within a few yards, they were much surprised to see a very lively snake suddenly dart about six inches of head and body erect out of the water.

The creature showed no sign of alarm or desire to escape; but, with bold and menacing aspect, rather turned towards the boat, as if ready for attack. A stroke of the boatman's oar stopped its course, but, soon after being taken into the boat, it showed such energetic and unmistakable signs of reviving that it was promptly bandied overboard. The length, as it lay stretched on board, was estimated at a little over twenty inches: and that it was really an adder was verified by an examination of a preserved adder's skin.

It is well known that adders take readily to the water, and swim across our mountain streams without hesitation, but to cross Loch Ness, as this creature was obviously attempting to do, is quite a different matter, for, at this point, near Urquhart Castle. the shortest distance across is a mile and half-a-furlong. When first seen, the adder was about a hundred yards from the western shore.


Not quite a Nessie, and people don't tend to mistake 20 inch animals for 20 foot animals. As it turned out, a video had appeared on the BBC news website showing this type of behaviour. The only mystery for me was the implication that this snake was close to finishing a one mile swim. Is that possible? I don't know. 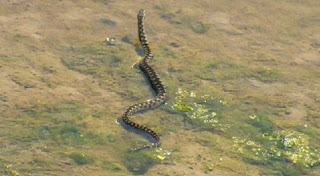 However, one feature of this story caught my attention in relation to the giant eel theory. It was the statement:

... they were much surprised to see a very lively snake suddenly dart about six inches of head and body erect out of the water.

I assumed that a serpent like creature in water would find such a task difficult, but this does not seem to be the case.  Showing six inches out of twenty of its overall length scales up to a classic six foot neck out of a twenty foot body, except in the case of a giant eel, it is not a "proper" neck.

Does the scaling up in terms of maintaining positive buoyancy stack up? Does the difference between eel and adder physiology preclude even a twenty inch eel doing this? Of course, adders have lungs and eels have swimbladders. Which gives the greater positive buoyancy? That eels can achieve positive buoyancy is a given since they can get from their usual benthic dwelling to the surface and even onto land.

A cursory look around Google Images showed nothing of an eel raised in the erect fashion of our adder story. This has always been an argument against giant eel. That long, thin neck with its supine ability described by witnesses at Loch Ness goes counter to the thick set nature of the eel.


Moving onto another inhabitant of Loch Ness, this was printed in the 3rd January 1857 edition of the Warder and Dublin Weekly Mail, having been lifted from the Inverness Advertiser.

VORACITY OF THE PIKE.—The voracity of this fish is well known to all persons anywise acquainted with fresh water fishing. A most remarkable instance of it occurred lately near the western extremity of Loch Ness, where a brood of young ducks, thirteen in number, were gobbled up in a single day. In the same locality a few young turkeys went to the lake-side to drink, but immediately on their arrival at the water's edge, two or three of their number were snapped under water by this most incorrigible destroyer.— Inverness Advertiser.

This clipping also came to mind when someone on the Internet shot off a caricature of my idea that the Loch Ness creatures could predate land creatures. It seems that another denizen of the loch has already learnt this trick and put it to good use. After all, what pike could resist a meal of duck or turkey?

Of course, we assume they were pike and not more mysterious residents of the loch ... My idea of larger creatures doing the same to creatures bigger than ducks or turkeys does not seem so far fetched after all.