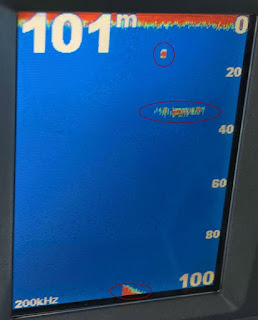 Let us now look at another recent Nessie event when Mike Bell, captain of the cruise boat, Nessie Hunter snapped this sonar hit when near Urquhart Castle on the 27th June. The account from the Sun newspaper is quoted below to give a flavour of what happened:

A BOAT skipper claims he's finally found the Loch Ness Monster lurking beneath the waves in Scotland. Mike Bell captured the remarkable sonar image which he reckons shows 25ft-long Nessie. The sonar picture, taken while he was taking a group of tourists for a trip on Loch Ness on June 27, shows the bottom of the loch, a fish and a long, thin object about 115ft below the surface. But when the 24-year-old skipper took readings at the same spot the mystery object had vanished. Mike, from nearby Drumnadrochit, said:

“I would like to think this is our creature, Nessie. It’s my first year being the skipper in the boat in five months and I’ve never seen it or had something that big on the sonar. My dad is the more experienced skipper who has been doing this for a few years and has said he’s never seen it that big before on the sonar. It’s my first sighting of Nessie and I think my dad is a wee bit jealous as he has never seen it. The standard size on the sonar is usually a sharp prick suggesting a small fish. The large line about 35 metres in the water was about 10-25 feet. An object of that size I would think is way too big for the normal species in the loch. It must have been about five or six minutes we spent trying to pick up this creature again.” 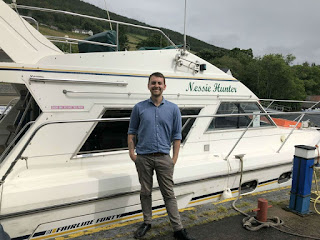 Now I wasn't sure if this was the same Nessie Hunter boat associated with the infamous George Edwards. Perhaps it is or was, but it doesn't matter as this is a different person with a different story to tell. What can we tell from the sonar image at the top of this article? Three targets are circled in the picture and the first one at the bottom coincides with the depth measure of 101m at the top left and so we can take this to be part of the loch bed.

That suggests objects of notable size in the range of a sonic nine feet high and not likely to be fish or a group of fish (because fish do not shoal into larger aggregates in Loch Ness). Below is a Fishfinder screen for what fish tend to look like. Here the depth is in feet and not metres and is shallower at 30 feet deep. You can see the fish as crescent images generally taking up a height of less than a foot. 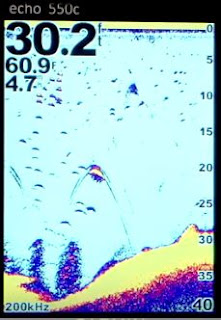 But let me point out again that though the vertical axis denotes depth, the horizontal axis denotes time and that is why this should not be interpreted in the same manner as an optical image. In real time, the sonar screen moves from right to left, with the sonar returns on the right being the most recent data.

Does this imply a creature with a body thickness of nine feet, which is big even by Nessie standards? Well, we do not know the orientation of the object or whether it changed over time, so that is unknown. Also, the 17 metre (54 feet) extent of the image suggests that the object is moving in roughly the same direction as the boat for no more than 17 metres before moving out of the sonar beam.

However, if a true elongated object was aligned with the boat's length, then as the boat passed over such a stationary object, then the trace would be consistent with its true length. Whether this is a stationary or moving object trace is hard to say. Meantime, one interpretation of the shallower compact sonar image is that it could be an elongated perpendicular object which is either stationary or moving away from the sonar sweep.

Note that the false colour scale of each object is also a measure of the object's density. The lighter the colour, the stronger the return of the sonar echo. What one can deduce from that in this image is unclear, but in the case of fish, it is the swimbladder that returns the strongest signal and the lungs for mammals and reptiles. Opinions are divided on whether the Loch Ness Monster has lungs, swimbladders, other air sacs or nothing at all which would give them a weak sonar signal.


Having said all that, what kind of objects could produce this kind of trace? What about waterlogged tree trunks which have achieved a degree of mid water buoyancy? I am not sure these would account for the thickness of object traced and we are told the objects could not be found on a rescan of the area.

The thermocline is also oft mentioned in such scenarios but would not such a large super structure produce more than a 17m blip on the screen? Indeed, what does the thermocline or logs or seals or other objects of interest actually look like on modern sonar screens? Surely an appropriate catalogue of such images would be a boon to interpreting such images.

The final explanation would be effects of false sonar images produced by reflection and refraction. However, this just begs the question again, what do such images look like? Are the possible variations in such spurious echoes so wide and varied that it becomes an unfalsifiable scenario? Again, proven comparison images are required here.

So, the account focuses on the deeper sonar hit, although one is inclined to include both images in the debate and I still have a query over the relative brokenness of the deeper image.  These could be images of two large creatures and they are certainly of more interest than the recent surface photography and ranks with a similar sonar image taken by Marcus Atkinson in 2012.