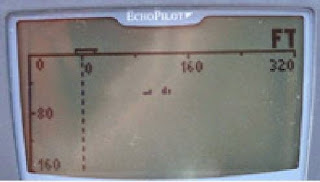 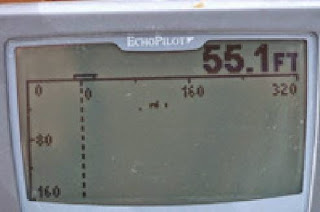 I will be giving a talk on the F. C. Adams photograph at the Edinburgh Fortean Society on Tuesday 9th June at 7:30pm. Whatever you may think of this picture, my talk will reveal new information and analysis concerning it. I will also consider the investigative tools and techniques that encompass such a subject.

Comments should be limited to the talk rather than the nature of the photograph as I will publish the details of the talk after it has been given. The venue for the talk is Downstairs in the Crypt Bar at the Jekyll and Hyde Pub, 112 Hanover Street, EH2 1DR.

A Couple of Clippings from 1933

Cryptid researcher, Paul Cropper, sent me a couple of PDFs from the Dundee Courier from the early days of the Loch Ness Monster in 1933.

The first is dated 23rd May 1933 and this one of the earliest clippings on the subject. As a comparison, the Aldie Mackay story which kick started the Loch Ness Monster story appeared three weeks earlier on the 2nd May in the Inverness Courier. 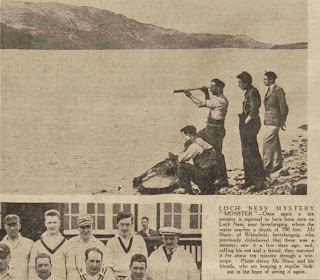 
LOCH NESS MYSTERY "MONSTER" - Once again a sea monster is reported to have been seen on Loch Ness, near lnverfarigaig, where the water reaches a depth of 700 feet. Mr Shaw, of Whitefield, Inverfarigaig, who previously disbelieved that there was a monster, saw it a few days ago, and, calling his son and a friend. they watched it for about ten minutes through a telescope. Photo shows Mr Shaw and his friends, who are keeping a regular look-out in the hope of seeing it again.


The Mister Shaw in question was Alexander Shaw, who was interviewed by Rupert T. Gould for his 1934 book, "The Loch Ness Monster and Others". The relevant testimony is on page 40 and is reproduced below (click on the images to enlarge). 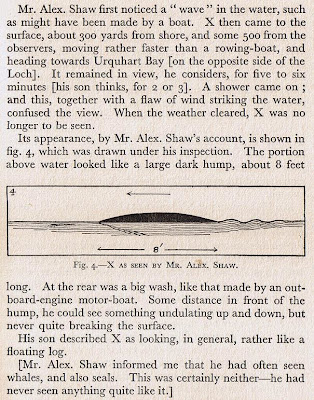 I note that Mr. Shaw is stated to have lived in a house about 150 feet above the loch at Whitefield. I wonder if this is the same house that would later be occupied by Lachlan Stuart, who took his famous monster picture in 1951?

The second clipping is dated 27th December 1933 and concerns the discovery of a pile of bones which has been covered here before. The picture belows add some more facts, though the conclusion is still the same that these bones did not belong to a Loch Ness Monster. 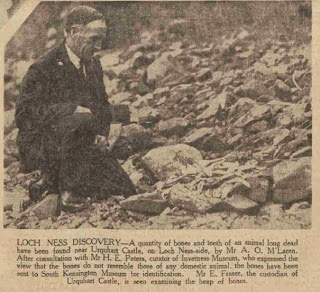 LOCH NESS DISCOVERY - A quantity of bones and teeth of an animal long dead have been found near Urquhart Castle, on Loch Ness-side, by Mr A. O. M'Laren. After consultation with Mr H. E. Peters, curator of Inverness Museum, who expressed the view that the bones do not resemble those of any domestic animal, the bones have been sent to South Kensington Museum for identification. Mr E. Fraser. the custodian of Urquhart Castle, is seen examining the heap of bones.

These bones would have been sent to South Kensington Museum around the same time as the infamous casts of tracks found by Marmaduke Wetherell. Unlike the tracks, nothing more is heard of these bones.