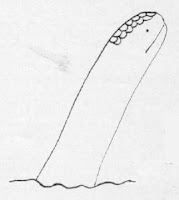 What Richard Jenkyns saw on a windy morning just under fifty years has become one of the classic Loch Ness Monster sightings, appearing in various of the top books of the time. Let us start with the account of Richard Jenkyns' sighting taken from Rip's Nessletter number 3 dated May 1974 (No.3):

I can now include the very good sighting had by Mr. Richard Jenkyns from the shoreline of his property at 'Point Clair'.

The date was Saturday November 10th and the time 1145 approx. The weather was stormy with a strong wind blowing from the N.W. but in spite of this quite large rollers were coming in to the shore, say 18 inches to 2ft in height but they were not in the form of white horses or breakers. My site was a small clearing in the woodland about 20 yards from the shore and about 20 ft above the level of the loch, I was starting a reluctant tractor and in order to do this, it had been found necessary to remove the silencer, the tractor started with a roar, much black smoke etc. and almost immediately afterwards I heard a very large splash as if someone had gone in from the high board very flat and all this over the noise of the gale rushing through the bushes and the tractor.

I got off the tractor and went to look at the loch but could see nothing so after a few moments returned to the tractor, I then took a further glance and saw a ring of concentric expanding ripples in the waves just out from the end of the new jetty which we are constructing, nothing further so back to the tractor. A few moments later I glanced again towards the loch and there nicely framed by a curved overhanging bough, a fish like object (at first) started to appear quite slowly and steadily until it was about 18 inches above the water surface, it then seemed to pause but on reflection I think that this may have been a wave rising up the neck, and then came up about another two feet or so.

It then seemed to stay quite motionless for a short time, very hard to say how long as I was flabbergasted, it was leaning slightly forward and my view was that of a profile. It then moved slowly forward towards the easterly end of the loch and parallel to the shore and slowly sinking from the base upwards but not splashing forward or porpoising etc. It moved about forty yards or so out of the frame work of the bough and I walked forward to see it finally sink out of sight. Now for the first time I realised that I had probably seen the beastie and I became rather bewildered and it has taken me some time to rationalise my sighting.

Now for a description and I am sorry that I cannot draw, colour black or a browny grey, texture neither rough nor smooth or slimy, matt is the best word I can think of at the moment, diameter say 9", no fins or gills, there appeared to be scales very large on the head only but this was only an impression, a great gash of a mouth at least 9" long and tight shut and above the centre of the mouth what may have been an eye, but possibly a blow hole, very small it appeared to me to be about the size of a pea and pitch black. I was under the impression that the animal was well aware of my presence.
When it first appeared it was about 15' out of the vertical leaning forward but when it sank, it increased this angle to about 30'. There was no further indication of how much remained under water but about a week later I found a 10lb salmon still just alive with a large wound in its side against the jetty. I wonder if it had attacked this fish. The general appearance of the animal was that of a tube, slightly rounded at the top with the head profile rather like that of a lizard, snake or frog. I saw no sign of the often mentioned horses head.
So it is time to analyze the ins and outs of this interesting report and see what we can conclude from it. As I progressed in this study, I noted the words beginning to increase at a rapid rate. The result of this was a decision to publish this as a monograph at a small price. You can see the title on the cover page below as I have used this as a template for how to look into other such sightings. It will be published as a kindle e-book and I would like readers to consider it as a donation as well. After all, the previous few hundred articles have been free of charge!
Some famous sightings just do not make it to this blog. You won't read about the Torquil MacLeod or Arthur Grant land sightings here, they stay in the book "When Monsters come Ashore" and so on. Enjoy the read and remember to leave an Amazon review, thanks.
The book can be found at amazon.com and at amazon.co.uk. 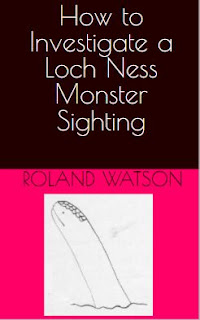 The author can be contacted at lochnesskelpie@gmail.com
Posted by Glasgow Boy at 11:50