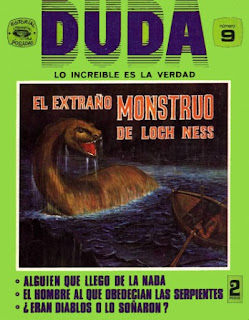 Its a funny old world sometimes. Just a couple of weeks after posting on Arthur Grant and whether our favourite beastie had to negotiate a wall to get back to the safety of deep waters, something turned up on eBay. It was a Mexican magazine called Duda issue No.9 from July 1971 devoted to the subject of the Loch Ness Monster. The title "Duda" means "Doubt" in Spanish and they seemed to have published on various mysteries from all parts of the world over the years. A look at the pages displayed on the listing showed that the author had included the Grant case as you can see below. 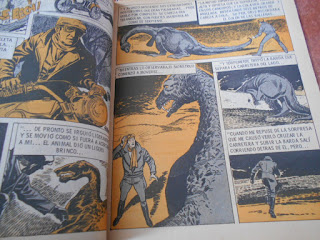 As was the case with these illustrated magazines, they did like to go a bit beyond what had been reported in the original testimony from the primary source newspapers of the time. The more dramatic the picture, the better the sales I guess. Here we see Arthur Grant fully kitted out in motor cycling gear, leather boots, goggles and all. The creature itself is more threatening than what Grant described with human chomping teeth included. I suspect Grant is a bit too close to the creature here for his own good.

But then the wall appears and the creature clambers over it. The translation from the Spanish reads "and awkwardly climb the wall that separates the road from the loch". One would be interested to know what the magazine's source material was for this account as none I know of mention a wall. Either way, their version of Nessie with powerful hindquarters knows how to get over a wall.

A bit of a fun coincidence. Maybe someone can translate the Spanish and I include the other pages I saw and wonder what report they are referring to when the monster pops up in front of a man in a boat. The one from 11th July 1935 in the adjoining Loch Dochfour is the Mrs Gerald McGrath head and neck account from 11th June 1935 which I include at the end from The Scotsman of the 12th June. The description of two rows of fin like "excrescences" refers to some kind of abnormal protuberances which is quite curious and difficult to envisage without a sketch. 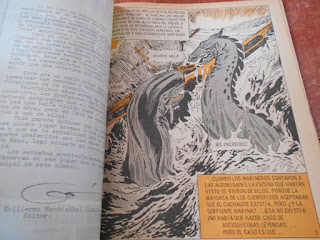 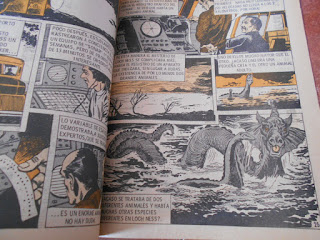 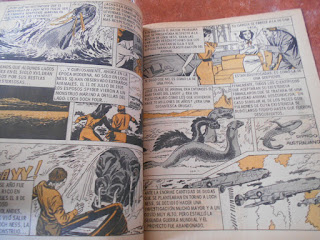 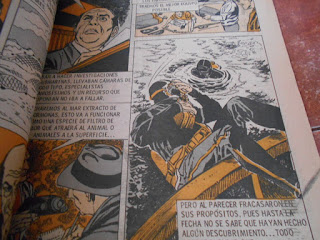 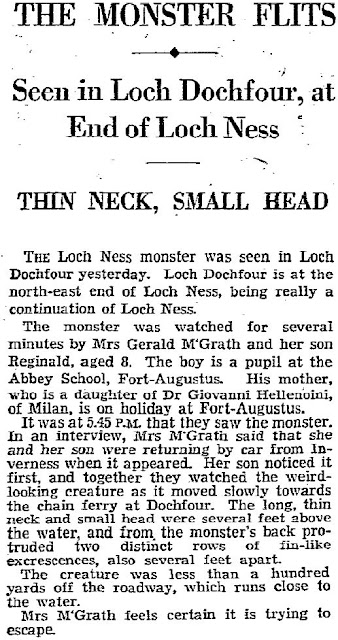