Something is afoot in the remote Siberian lake called Labynkyr as a diver has claimed to have found the skeletal remains of a large creature. We covered this monster lake back in September and so await with interest any further developments.

From the original article:

A Russian scientist has made the first deep plunge in the waters of Yakutia’s Lake Labynkyr which claims to be home to a 'Siberian Loch Ness monster'. The fact has a real chance to be registered in the Guinness Book of Records, a statement of the Russian Geografical Society (RGO) has said.

Head of the RGO underwater research team Dmitry Shiller went down to the bottom of one of the world’s coldest lakes located in the remote Yakutia region of Russia’s Siberia. This was the first time a man plunged to the depths of the lake.

In winter the air temperature here drops down to minus 89 degree Celsius.

According to members of the team, the expedition’s aim was to take video footage of the lakes’ bottom and collect samples of water, flora and fauna.

Moreover, according to the scientists, with the help of an underwater scanner they discovered jaws and skeletal remains of a large animal.

Lake Labynkyr is known for its geographical characteristics, the depth of its cracks reaches 80 meters. Evenk and Yakut people, Yakutia natives, claim an underwater creature, a "Siberian Loch Ness monster", lurks in there.

UPDATE: Another article came out from a Russian news outlet, but it makes no mention of any bones!

The 2013 Edinburgh International Science Festival has just published its brochure and the Symposium on the 80th Anniversary of the first modern sighting of the Loch Ness Monster gets a slot on page 42. Further details can be had at the official "Nessie 80" website and I add some words of my own here.

I am beginning to gather my thoughts for my own talk on the pre-Nessie era prior to 1933. There is a spot of "limbering up" as I currently engage Dick Raynor in a little exchange on Richard Franck's  "floating island" at Loch Ness. But that will expand into other areas such as Ulrich Magin's sceptical study on pre-1933 sightings written for volume seven of "Fortean Studies" (published by Fortean Times). What doesn't get used at the lecture will still be used on this blog for your interest. 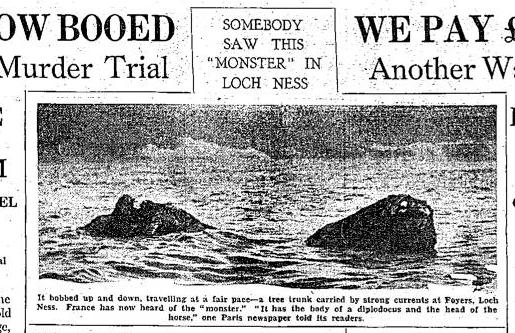 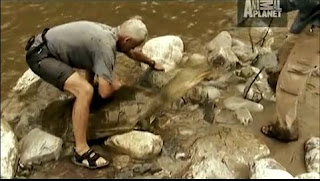