Thoughts on the Loch Ness Kelpie

Ten years before anyone had heard of a Loch Ness Monster, M. Oldfield Howey published his "The Horse in Magic and Myth" in 1923. It was reviewed in the 4th April edition of the Aberdeen Press and Journal. You can read that review below to which I shall add some comments after. 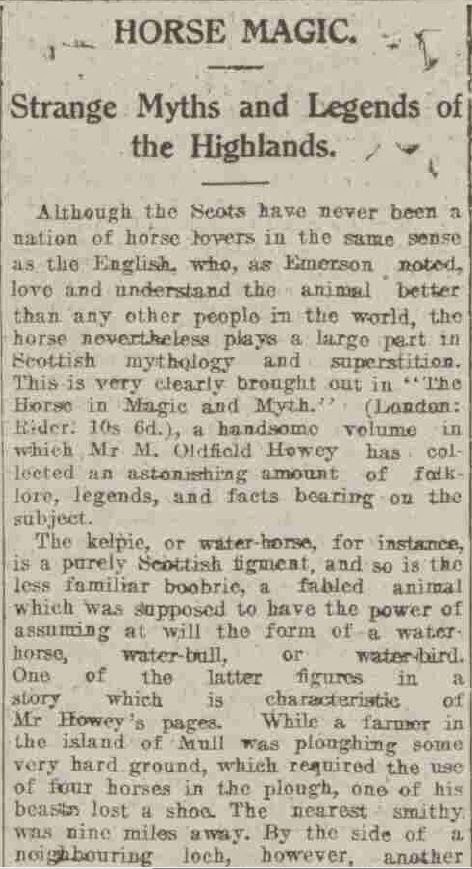 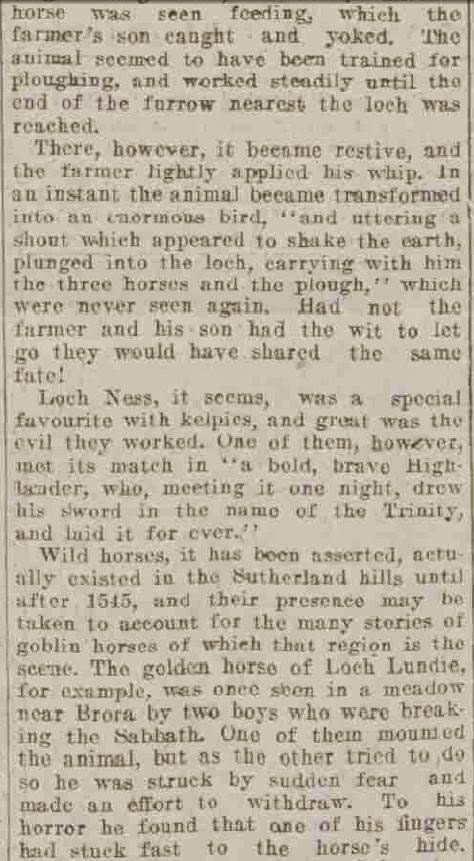 Note first the comment that "Loch Ness, it seems, was a special favourite with kelpies ..." to which we add our own "Amen". In my book, "The Water Horses of Loch Ness", I collected such accounts and found them well ahead of any other loch with a tradition of the Each Uisge, I was not aware of this book, so am glad to add it to the growing list. Doubtless, others will turn up as the months and years pass.

The other point is the link between the Kelpie and the Boobrie. The shape shifting between the aquatic and the avian is only hinted at in one or two tales, but this reference reinforces that link. It makes one wonder what the folklorists thought the actual basic form of the underlying entity was?

The final thought concerns the idea of the Kelpie spending time on land. This seems as counter intuitive as the idea of a horse spending time in water. Though it is not mentioned here, the main reason for these ventures onto terra firma was as a predator lying in wait, its true intent hidden from the victim and the end as swift as the strike of a cobra.

So why would a creature which reigned supreme in the water be framed as a greater danger out of the water? Why not do the obvious and have it grabbing its hapless victims as they walked by the shore or as they worked in their boats? My own opinion is that real land sightings of these creatures were the kernel for this departure from the obvious modus operandi of a water based beast.


Mr. Howey has his own interesting theory that it was actually native, wild horses that may have seeded the story of dangerous, supernatural equines. However, this idea seems to be limited to the far extremities of the north of Scotland in Sutherland and it is not certain when such animals were ever extant in Scotland.

Though written ten years before Nessie, the two sides of the arguments are still visible. Was it a creature just beyond the ken of men or a simple case of misidentification? Some things seem destined never to change!