Diving with the Pisces Submarine (1969 article)

I am currently busy with my next Loch Ness Monster book, so blog postings have been a bit less frequent. But it is time to delve into the archives and surface with one of those interesting articles that I occasionally encounter during my searches at virtual and real libraries. This article from Diver Magazine of September to October 1969 details an excursion into the depths of Loch Ness with the Vickers Pisces submarine. We know about Dan Taylor's yellow Viperfish, but the Pisces was also there at the loch during those busy year of 1969. Readers may wish to speculate on what they struck during the dive and those interesting craters and I refer them to this previous article. 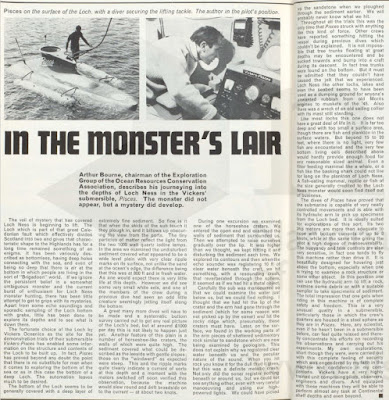 (Pisces on the surface of the Loch, with a diver securing the lifting tackle. The author in the pilot's position.)

IN THE MONSTER'S LAIR

Arthur Bourne, chairman of the Exploration Group of the Ocean Resources Conservation Association, describes his journeying into the depths of Loch Ness in the Vickers' submersible, Pisces. The monster did not appear, but a mystery did develop.

The veil of mystery that has covered Loch Ness is beginning to lift. The Loch which is part of that great Caledonian fault which effectively divides Scotland into two and gives that characteristic shape to the Highlands has for a long time remained something of an enigma. It has been variously described as bottomless, having deep holes connecting with the sea, and even of being so deep that there is air at the bottom in which people are living in the sort of "Brigadoon" world. If we ignore the persistent belief in a somewhat ambiguous monster and the current burst of enthusiasm for Loch Ness monster hunting, there has been little attempt to get to grips with its mysteries.

Apart from some echo soundings and sporadic sampling of the Loch bottom with grabs, little has been done to explore its depths and to see what is down there. The fortunate choice of the Loch by Vickers Oceanics as the site for the demonstration trials of their submersible Vickers-Pisces has enabled some information on the structure and contents of the Loch to be built up. In fact, Pisces has proved beyond any doubt the point that there is no substitute for man when it comes to exploring the bottom of the sea or as in this case the bottom of a deep Loch. The automation leaves much to be desired. The bottom of the Loch seems to be generally covered with a deep layer of extremely fine sediment. So fine is it that when the skids of the sub touch it they plough in, and it billows up obscuring the view from the ports.

The tiny particles of matter reflect the light from the two 1000 watt quartz iodine lamps. In the area we examined the undisturbed sediment covered what appeared to be a wide level plain with very clear ripple marks on its surface, not unlike the sand at the ocean's edge, the difference being that this was at 800 ft and in fresh water. As one would expect there is very little life at this depth. However we did see some very small white eels, and one of the members of the crew during a previous dive had seen an odd little creature seemingly jetting itself along the bottom.

A great many more dives will need to be made and a systematic bottom survey carried out to get any real picture of the Loch's bed, but at around £1000 per day this is not likely to happen just yet. Another feature of this plain is a number of horseshoe-like craters. the walls of which were quite high. The sediment covered what could be described as the leeside with gentle slopes; those on the "windward" as expected were steep. This and the ripple marks quite clearly indicate a current of sorts at this depth and a moment with the motors switched off soon verified this observation, because the machine would slew round and drift broadside on to the current — at about two knots.

During one excursion we examined one of the horseshoe craters. We entered the open end and examined the walls of sediment that surrounded us. Then we attempted to raise ourselves gradually over the lip. It was higher than we thought, we kept hitting it and disturbing the sediment each time. We explored its contours and then when the echo sounder was registering 10 ft of clear water beneath the craft, we hit something, with a resounding crash, that reverberated through the sphere. It seemed as if we had hit a metal object. Carefully the sub was manoeuvred so that we could examine the water just below us, but we could find nothing. I thought that we had hit the lip of the crater and the arm had gone through the sediment (which for some reason was not picked up by the sonar) and hit the rocky ridge which, presumably, these craters must have.

Later, on the surface, we found in the working parts of the arm pieces of shattered sedimentary rock similar to sandstone which are now being examined by geologists. This does not explain why we registered clear water beneath us and the peculiar nature of the sound. When you hit rock you know it for the dull thud it gives, but this was a definite metallic crash. Not only did the sonar register nothing beneath or around us, but we could not see anything either, even with very careful manoeuvring and using our high-powered lights. We could have picked up the sandstone when we ploughed through the sediment earlier. We will probably never know what we hit. Throughout all the trials this was the only time that Pisces struck with anything like this kind of force.

Other crews have reported something hitting the vessel during previous dives which couldn't be explained. It is not impossible that tree trunks floating at great depths may be encountered and be sucked towards and bump into a craft during its descent. In fact tree trunks were found on the bottom. But it must be admitted that they couldn't have caused the jolt that we experienced. Loch Ness like other lochs, lakes and even the seabed seems to have been used as a dumping ground for anyone's unwanted rubbish from old Morris engines to muskets of the '45. Also there was a wreck of an old sailing collier with its mast still standing. Like most lochs this one does not have a great deal of life in it. It is far too deep and with too small a surface area, though there are fish and plankton in the surface waters.

But beyond 15 to 20 feet, where there is no light, very few fish are encountered and the very few bottom living eels described above would hardly provide enough food for any reasonable sized animal. Even a filer feeding mammal like a whale, or a fish like the basking shark could not live for long on the plankton of Loch Ness. A fish-eating mammal, reptile or fish of the size generally credited to the Loch Ness monster would soon find itself out of business. The dives of Pisces have proved that the submarine is capable of very neatly controlled movements and is able with its hydraulic arm to pick up specimens from the Loch bed. It is ideally suited for explorations of this sort. Its two 3hp motors are more than adequate to cope with bottom currents of up to 3 knots, while at the same time giving the pilot a high degree of manoeuvrability.

The buoyancy and trim controls are also very sensitive, in fact one tends to fly this machine rather than drive it. It is beautifully designed for hovering lust above the bottom, especially when one is trying to examine a rock structure or some other object. In this position one can use the hydraulic arm to lift a rock, examine some debris or with a suitable sampler to take specimens of sediment. The total impression that one gets when riding in this machine is of complete safety and freedom. This is a very unusual quality in a submersible. Particularly those in which the crew's quarters are housed in a steel sphere as they are in Pisces.

Here, any scientist, even if he hasn't been in a submersible before, can feel quite relaxed and thereby concentrate his efforts on recording his observations and carrying out his experiments. My own explorations, short though they were, were carried out with this complete feeling of security which was engendered by my faith in the machine and confidence in my companions. Vickers have a very highly trained unit comprising pilots, observers, engineers and divers. And equipped with these machines they will be able to perform almost any task at continental shelf depths and even beyond.