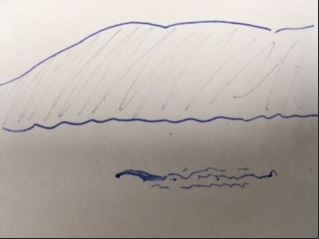 It was some weeks back that a reader informed me of a previously unreported eyewitness account  that had been posted on the Internet. I contacted the witness and discussed the case with him before agreeing to republish the account here. Anyway, to cut a long story short, we go straight to the account as told by one of the two witnesses that day over eleven years ago.

I am writing this under a pseudonym. I am an American working in a field involving considerable professional scrutiny. The one time I discussed this, at a family holiday party after a few drinks, I was laughed at and ribbed for the next few years, so I can only imagine how my present employers might react!

I am not a Loch Ness Monster enthusiast and know as much as the average person. I didn't care about it and certainly wasn't looking for it. Same with my ex. All I have is the photo, taken through the passengers side window (slight camera reflection) showing a dark body and neck low over the water. I am afraid to publicly post it in case I am penalised since I wasn't the photographer and don't own the copyright. Things ended badly and I can't imagine it would be a pleasant conversation if I reached out to her. But I want to share it and don't know how.

The sketch at the top of the article is based on the photograph taken that day as well as some of the witness' recollection of the day. The witness was reticent to put the photograph on the Internet because of the issues mentioned above, but having pointed him to my blog, the research done there and the welcome it gives to witnesses who fear ridicule, he sent me the image on the condition I showed it to no one else and delete it after use.

Based on that photograph, I could make some observations.

I have confirmed the location of the photo as the Clansman Hotel area.

There is no EXIF data with the image, so I cannot confirm the date it was recorded.

I recently went to the loch and took some comparison shots, which I outline below

The object is blurred as if to indicate motion. This is indicated by the fact that the background hills and foreground bushes show no sign of blurring. The presumed neck is more blurred than the bulk of the body, which is consistent with his description of the neck moving from side to side. There is a strong wake behind the object which indicates said motion and also that it is rapid.

The image size is about 320kb, so closer inspection of the object is not possible. Access to the original Mb image would be useful (as well as for the exif data).

The camera taking the picture is reflected in the image indicating the car window was rolled up as testified.

I then indulged in some speculations. The only object of comparison would be a dark boat. Most boats are light in colour or multicoloured. Either way, other unorthodox objects need to be considered and eliminated as required - jet skis, speedboats, windsurfers, yachts. None seem to fit the shape of this object unless they assumed some strange contortions.

The object is hundreds of yards away so details are confined to gross morphology. A comparison shot which included a Jacobite boat was taken by myself in April and is shown below. The witness photograph was then overlaid onto this picture, aligning the background hill contours as carefully as possible. 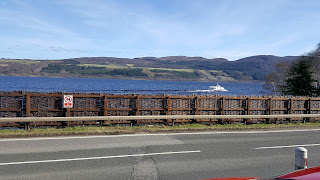 This was the best picture and I think shows the Jacobite Warrior cruise boat. Its beam or width is 8 meters and measuring the relative image sizes of the two, an estimate of monster size can be made as follows based on measurements I made with a ruler on the computer screen display.

There are some caveats. The "monster" is a bit further out and so is actually bigger in terms of perspective. The boat rear is at a slight angle to us and so the apparent foreshortening makes its measured length a little less than 8m. These two observations probably cancel each other out to a certain extent.

Based on this, I am pretty sure that is not a bird like a swan or cormorant taking off as it disturbs the water with its feet. The object in the picture is uniformly dark and swans are white. Given the sun was behind the photographer, I would not expect a white swan to turn out black. I also note an absence of anything I would call wings in the picture.

As an aside, the witness took a considerable bit of flak on another forum when he refused to publish the picture. Part of that would be the usual sceptic disdain, but some of it I suspect was an attempt to goad the witness into publishing, which he resolutely refused to do. Whatever the mix of intentions, witnesses with a story to tell may be deterred from coming forward when they see exchanges such as this. That is very sad.

In conclusion, the photograph is a good one by Loch Ness Monster standards. Obviously, I would like it to be out there for others to examine and form their own opinions. Perhaps that time will come, but for all that, it is a reported sighting of the monster, photo or no photo and that qualifies it for inclusion in the growing list of people who have claimed to have seen the creature since decades past.