How many people can Loch Ness hold?

It's one of those "amazing" facts that is trotted out about Loch Ness. The fact that the volume of water in Loch Ness is equivalent to containing the entire population of the world. But by how much seems a matter of opinion.

This website suggests ten times the world's population. The Daily Mirror seems to say the same, but says "surface area" instead of volume. Bzzzzz! Meanwhile, looking further back, issue 235 of the Europe magazine from 1983 states it is three times the world population.

It is one of those factoids like the one that the Post Office Tower or Eiffel Tower could be submerged in the loch without trace. But when this population fact was first mentioned was a bit of a mystery to me, though I certainly recall it going back before the Internet. I checked most of the classic books, but couldn't find any mention of it. Where had it come from and indeed does it stack up?

Now the volume of water in Loch Ness is stated as 7.5 cubic kilometres in its Wikipedia entry. This translates to 7.4 billion cubic metres. What is the average volume of a human? Not so easy to figure out, but good old Google suggested that water displacement measurements of 521 people of varying ages gave 66.4 litres or 0.0664 cubic metres. That seemed to be about half what I thought for an adult, but we are including babies and kids in our experimental mega-plunge.

Divide the volume of the loch by this average human volume and you get about 111,445,783,130 people fitting into Loch Ness. Since the world's population is currently estimated at about 7.3 billion, then you'll get them all into Loch Ness not just 10 times over but more than 15 times over. It seems our factmeisters were right but also underestimating things.

But what about surface area as the Daily Mirror misquoted? The best known fact on this wise is that the Isle of Wight can hold the entire standing population of the world. Okay, what about Loch Ness with a surface area of 56 million square metres? If we assume five people squeezing up per square metre, then that's 280 million people, which is well off the mark.

But, again, who first concocted this fact? Was it the Loch Ness Investigation Bureau or some more obscure book or booklet? If anyone knows, leave a comment or send an email.

The world is full of Nessie sceptics, they may be young or old, fat or thin, near or far from the loch, they may be intelligent or dumb. What they do have in common is a shared belief that Loch Ness harbours no large, exotic species of animal. It is, of course, their right to hold such an opinion. However, another thing they may not have in common is the way they express that opinion and that involves personality.

Anyone studying the subject seriously might find it useful, but his repeatedly going into depth about exaggerated sightings and reports which, for anyone who knows the subject, have no credibility whatsoever, was the most annoying aspect of it and I found that extremely tiresome. This was the very reason why I didn’t include all of these irrelevant sightings in my own book. However, now they are all referenced, perhaps we can let them die a natural death.

It seems Gareth's mistake was making these eyewitness reports sound too "real". I began to suspect that if Tony didn't like the book, then, ipso facto, I would like it. Since I have started reading the book, that feeling has partially been confirmed. I will put up a proper review when I have finished (as I am sure Tony will).

Now Tony does not really involve himself in the search for any form of Nessie these days, his presence on such forums is minimal to say the least. Having written his book, "Loch Ness Understood", he perhaps feels that is all he has to say on the subject. I note that when Tony mentioned a book by another sceptic, Ronald Binns, called "The Loch Ness Mystery: Solved", he describes this as "rather prematurely titled". Presumably, Tony has now "put the world to rights" with his similarly (but still prematurely) titled book!

Tony suggests Adrian Shine would do a better book on the history of the Loch Ness Monster and its pursuers. I wouldn't care to give an opinion on that but I would certainly look forward to such a book (as I did with Tony's).  I think Adrian is now aged 67 years old and must be nearing retirement from his post at the Loch Ness Centre in Drumnadrochit. Maybe after this we will see such a book.

As best as I can ascertain, Tony now tends to be preoccupied with aiming verbal arrows at people who believe in one or more gods (presumably he regards them as another set of witnesses who have misidentified something ordinary for something extraordinary). However, back to his quote.

In typical bombastic fashion, he put us to rights by describing all claims to seeing a large animal in the loch as being "exaggerated", having "no credibility", "tiresome", "irrelevant" and we ought to "let them die a natural death". And this, he says, should be obvious to "anyone who knows the subject".

Let us look at how Tony handles one of these claimed sightings. I refer to the John McLean case and how Tony has decided that this was in fact just a bird; a cormorant to be more precise. His post in facebook can be found here.

The long neck fits in with cormorants. It is well known that people overestimate sizes over water. The body drawings are typical of boat wakes or groups of birds apart from the last drawing which is a bit of a mystery. Bearing in mind that only around a third of an aquatic animal's body appears above the surface when swimming, the size estimates would put this animal at around 50 to 60 feet or almost the size of the largest animal on the planet - a blue whale. We also know that long-necked animals have high metabolic rates so there would be insufficient food in the loch for a long-necked creature of any size. Oh how I wish I could have been looking over his shoulder so that I could have pointed out that he was actually seeing a ...... or a ...... or a ......, but my Tardis is currently not operational.

Now to dig a bit deeper into these words.

The long neck fits in with cormorants.

Well, it doesn't actually, the sketch by McLean looks nothing like a cormorant. The lack of a long beak is a give away. The proportions are also wrong. 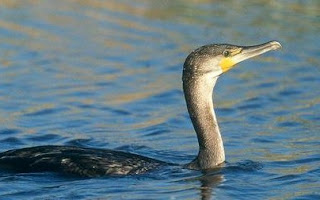 It is well known that people overestimate sizes over water.

But not by a factor of nearly seven. McLean suggested a length of up to 20ft (610cm) while a cormorant is about 90cm long. Moreover, overestimates are not so credible at a range of under twenty yards. This is a bit like someone claiming they saw an articulated lorry pass by, only for some "expert" to tell them they actually saw a mini car. I think the words "exaggerated" and "no credibility" just as equally apply to Tony's strained interpretation of what Mr. McLean saw.

The body drawings are typical of boat wakes or groups of birds apart from the last drawing which is a bit of a mystery.

Group of birds, but only one neck? Curiouser and curiouser. It goes without saying that Tony completely ignores any experience John McLean may have had as regards boats and birds. After all, he had claimed to have seen the monster, so he is immediately an unreliable witness. That is circular reasoning by any other name. As for the inflated hump, Tony hopes we will just ignore this minor "mystery".

Bearing in mind that only around a third of an aquatic animal's body appears above the surface when swimming, the size estimates would put this animal at around 50 to 60 feet or almost the size of the largest animal on the planet - a blue whale.

Loch Ness Monster fans have always held that the creature has notable powers of positive buoyancy. This is rejected by sceptics, hence the unwarranted use of this one third formula. Tony fails to note that McLean said he saw the creature from tail to head, so that blows his one third calculation clean out of the water.

As a side note, here is a YouTube clip of an animal with positive buoyancy that matches and perhaps even exceeds that of our favourite cryptid. Nature again provides a precedent to the confounding of the sceptics.

We also know that long-necked animals have high metabolic rates so there would be insufficient food in the loch for a long-necked creature of any size.

Ah, such arrogance! Besides, Tony, I am sure you would rather send off your Tardis to more interesting times .... such as White Hart Lane in the early 1960s.

If this is what "anyone who knows the subject" knows, I will continue to live in ignorance, thanks very much.