A Couple of Interesting Nessie Documentaries 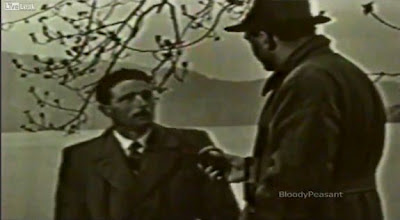 An old video from perhaps the late 1990s has been posted on LiveLeaks and I am not sure of its title or provenance but it is an enjoyable watch as old footage from years of reports and searches are shown. The documentary is sceptical and ends with the Sturgeon theory, which I guess is a monster of sorts (a subject worthy of  a future post no doubt).

Look out for Lachlan Stuart being interviewed at about 9m40s into the video (picture above). Quite topical considering the current posts on his photo and personalises the story a bit. You will also find the ubiquitous Alex Campbell, Tim Dinsdale and others featuring to varying degrees.

Another YouTube clip I saw is from a series of videos called "Mysterious Planet" whose 21st episode concentrates on the Loch Ness Monster. Now this clip has interest for me personally as they give time to the "eel head" interpretation of the photo that was first publicised on this blog. Based on that, the editor proposes the Giant Salamander theory which seems to have gained some traction recently (I suspect the editor had read this post I previously publicised).

This is not the first video I have seen that publicises the Hugh Gray eel head, so it is nice to see the word getting out on this important piece of Loch Ness Monster evidence.

The Loch Ness Monster has been drawn, painted and modelled in various ways for decades now. Some are not very serious as I  think of the many humorous postcards and models that have been churned out. However, some people with artistic skills have turned their talents to the Loch Ness story and framed their interpretation over a phenomenon that has had many opinions spoken over it.

One such artist is Bradford Johnson who I have communicated with in recent months. He has a long interest in Nessie and her hunters and has produced a portfolio of related paintings over the years. He is currently working on a gallery entitled "Surveillance And Looking For Signs" which focuses on the monster hunters themselves. One example he sent me is of the (in)famous Nessie hunter, Bernard Wetherell, who was implicated in the Surgeon's Photograph hoax. 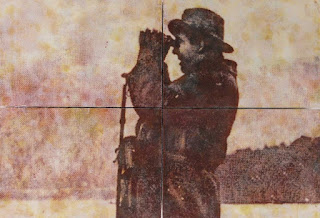 The paintings are derived from relevant photographs and Bradford is on the lookout for more hunter photographs. If anyone knows a good source for Wetherell pictures, let me know.

You can view his other Loch Ness Monster portfolios below: