Thoughts on John MacLean, Lachlan Stuart and the An Seileag

First off, I wrote an article on the famous John MacLean sighting a while back. The item was linked by James Jeffrey Paul a few days back which led to a comment by well known Nessie sceptic, Tony Harmsworth. He "explained" to James that it was a combination of a cormorant and waves. Shall we now go home? Not likely.

So what gets on my pectorals more than anything else in this subject? It's sceptics dissing and dumbing down Nessie witnesses without exception. It can be summed up in that most unusual of sceptical dogmas:


No Loch Ness Monster eyewitness has ever accurately described what they claimed to see.

That applies to all 1500 or so reports that we know about. Yes, it does sound counter-intuitive, doesn't it? But the only way they get away with this outlandish axiom is because the alternative is seen as even more counter-intuitive by the general public; that a monster inhabits Loch Ness. Sorry, but one implausibility should not rely on another for its justification.

But John MacLean was a local man who fished Loch Ness, I think he would have had some experience of the wildlife around Loch Ness. How much experience do you need around the loch to recognise a cormorant?

He was only about sixty feet from this animal, how close do you have to be to recognise a cormorant?

He observed this creature for six minutes, how long do you need to tell a cormorant from a monster?

Clearly none of this is relevant to the sceptic.

Thirteen years later, Lachlan Stuart claimed to have seen and photographed the Loch Ness Monster on the other side of the loch. Tony Harmsworth also has a hook into this story in his 1985 booklet, The Mysterious Monsters of Loch Ness. In this short work, he states that Richard Frere approached him and told him that he had witnessed Lachlan Stuart and Taylor Hay set up hay bales and tarpaulin to photograph a hoax.

This was at variance with later accounts which had Stuart merely confessing the deed to Frere. Tony stood by his version until he stated "I got it wrong" at the Nessie at 80 conference. Given the 28 year gap between booklet and recantation, I put it to you the recall of the 1985 Tony would be more reliable than the 2013 Tony.

But my main point here was I always wondered what a hay bale from that time would have looked like. Eventually I found a 1950s picture of Inchnacardoch Bay with hay bales in the distance. Judge for yourselves whether these types of objects are up to the task. I would say the job is not so clear cut as some make out, but no doubt one or two sceptics will come up with creative answers. 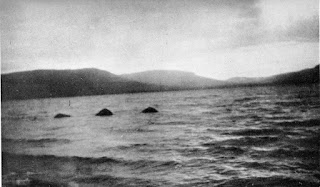 As a comparison, here is a photograph of hay bales in an Irish field. 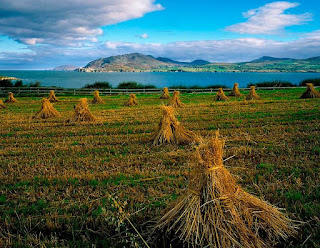 Moving on to more folkloric times, I recently found this story from The Celtic Review of 1905. It is set in the Isle of Lewis and Harris amongst the small lochs of that island.

Many years have passed since my old grandmother told me the tale; and she said that it was a very old story then. In the lochs there dwelt a huge monster, a water-horse. He was very dangerous. He used to swell the loch, so that any one that happened to be in the neighbourhood was swept into it, and afterwards devoured. This monster had a liking for women and children, whom he enticed to his dwellings under the loch, there to eat them up. The grass round the loch also served him for food. Not very long ago there was a seileig in a loch over the way of Leurbost.

A seileig is not the same as the each-uisge. It is like an enormous eel, and is supposed to come from the sea. Several people saw a part of this seileig rise like an island in the middle of the loch. They got a big hook and fastened it to a long chain. On the hook they hung the carcass of a sheep, and threw it into the loch. Next day they pulled out the chain. The sheep was gone, and the great hook had been pulled straight.

Giant eels form part of the tapestry of Scottish monsters. For example, one could argue that we can read an eel into the etymology of Loch Shiel (gaelic sealg or seileig).


Finally, a poem about the feared Kelpie taken from the The Mataura Ensign newspaper dated 6th May 1892.