Three books, two new and one old came into my hands in recent months. I have a look at them here beginning with "Mysteries of the Loch Ness Monster" which we are told are "from the secret files of the National Enquirer". Now, when those last two words are mentioned, American readers may feel justified in letting out a groan as that magazine has put out some rather tongue in cheek articles on the Loch Ness Monster in years past. 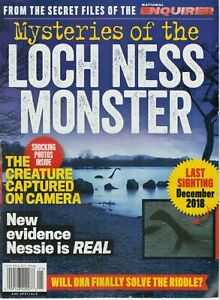 This item came out some time early in 2019 for the American market, so I obtained a copy from eBay. Consisting of ninety three pages, it begins with general sea monster myths and stories such as krakens, mermaids and sea serpents as it circles inwards to some other lake cryptids before the mystery of the monster itself. It is all standard stuff with diversions into cultural elements such as films and attractions around the loch.

However, something occurred in this publication that I have only ever seen once before and did not expect to see again. Yes, you guessed it, they printed the Hugh Gray photograph upside down! This last occurred in 1972 in Elwood Baumann's bog standard work, "The Loch Ness Monster". Now how on earth can anyone get that wrong in this information rich age? You only have to google for "hugh gray loch ness monster" and any link will take you to the correct orientation of the picture. Methinks someone is having a laugh.

Meantime, there is no mention of Tim Dinsdale's 1960 film of the creature which is very remiss, considering its pivotal role in Loch Ness Monster history and they get a few other things wrong such as the 1934 Lee picture being ascribed to F.C.Adams. Oh well, no book is perfect, but it is now part of the Loch Ness Monster book history and so I include it here.

The next book has a bit more clout and is entitled "Creatures from Elsewhere" published in 1992. I saw in listed during an online search and bought it for a few quid. When I opened it, I realised I had seen the material from somewhere years before. 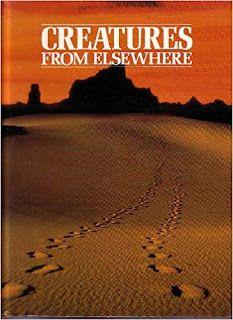 In fact, it was a series of reprints of articles from the Orbis "The Unexplained" magazines published between 1980 and 1983. In the book's 84 pages we had various cryptid articles ranging from Bigfoot to Werewolves to mermaids. But a good two thirds of the book is dedicated to lake and sea cryptids. So, we have Peter Costello on American lake monsters, Janet and Colin Bord on sea monsters and Irish lake monsters and Adrian Shine on the Loch Ness Monster. Nessie gets 13 pages in the form of the three articles originally penned by Adrian.

Looking at those articles, it is clear with hindsight that Adrian was in some kind of transition phase. There is no mention of sturgeons as a leading theory and he is still open to a few classic photos and films. The 1972 underwater flipper photo taken by the AAS is still looked upon with some favour. His words on sonar lead him to see this as an important tool though he admits the interpretation of the "data" is open to the opinion of experts.

Interestingly, he suggests only two possible explanations for Dick Raynor's 1967 film. It is either an otter or an unknown animal, no mention of the birds interpretation that is touted today and which could easily have been suggested back then. All in all, an interesting book and it is worth extracting these articles from the multi-volume magazines.

As a piece of nostalgia, I remember as a teenager in Glasgow going to my local newsagent every week to buy the latest issue of "The Unexplained" and expectantly building up the collection for the next binder volume. I still have them all, though the picture below is taken from eBay where you can occasionally pick up an entire set. 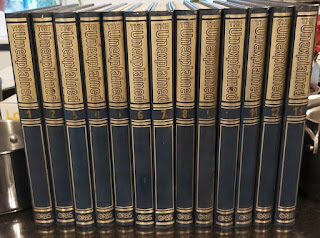 Moving onto the final publication, we have "The Loch Ness Monster" by Charles Fowkes which was published by Pitkin Publishing in 2019. Charles is a journalist and publisher and the book is one of those entry level tourism booklets that are aimed at lightly stocked bookshelves at various retail centres around and about Loch Ness. At 32 pages in length, it has a lot to pack into a small space and overall does this well. Starting in general with folklore and the world of monsters as well as the fear and intrigue they induce in mankind, Fowkes throws a statement out there which in my view is psychobabble:


Of course the Loch Ness Monster exists: it exists in our Collective Unconscious.


This quote is ascribed to an "anonymous Jungian analyst" who seems to not want to be identified. Readers who may recall our last article on Jon Erik Beckjord are reminded that Jungian archetypes and tulpoidal thought forms go hand in hand.

The way is prepared with further mentions of other lake monsters and the Loch Ness Monster is introduced by way of the ancient kelpie tradition. Though, as has happened in other books, kelpies and water horses are often confused as the same thing. Aleister Crowley gets a mention and it is mused whether he left his effect on the loch. I think the answer to that is "No" (as explained in my own book on the Loch Ness Water Horse).

The history of the loch and the various theories for the monster are examined, though I doubt one of them can be considered and that is methane gas eruptions. Loch Ness is too oligotrophic for such a scenario. Charles then gives us a timeline of Nessie hunting and reports from which one can often get a sense of the author's degree of scepticism in these sequences.

In this, he generally sticks to stating what the eyewitnesses said in a neutral manner. One divergence is where he states Maurice Burton's theory that the Hugh Gray photograph was an otter. Not even the most ardent sceptic takes that theory seriously now.

But if you are thinking this booklet looks familiar, you would be correct. This is in fact a revision of the same 1993 book published by Pitkin (below). However, the text of that book was done by a Lynn Picknett who is a paranormal researcher with very little to do with the Loch Ness Monster. Interestingly, I note that Lynn wrote the text, but the copyright of it lay with Charles Fowkes Limited. Lynn is better known for her books on some dubious conspiracy theories which, in comparison to Nessie, makes our favourite monster look as real as next door's dog. 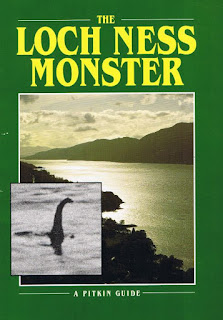 I went over this older booklet to see how things had changed since then and noticed she had adapted some text from Adrian Shine's aforementioned articles on the Loch Ness Monster for The Unexplained magazine. The text concerned Dick Raynor's 1967 film, but it was clear that this was the source. It was not quite word for word, but it was getting there. I did not check how far The Unexplained, if at all, was a further source for the booklet.

Plagiarism? Not quite. I checked Lynn's Wikipedia profile, it revealed that she had been the Deputy Editor of The Unexplained series back in the 1980s, so that explains her familiarity with Adrian's articles and it turns out that Adrian was acknowledged as a consultant for the booklet anyway.

Perhaps it was his influence that was evident when every classic Nessie photograph is rejected as evidence. But one curious thing to end with was that though Lynn closely followed Adrian on the 1967 Raynor film, all was not as it seemed. Adrian's original quote from the 1980s was:

Raynor is quite ready to entertain the possibility that the animal was an otter (the object was definitely animate); this is the only real possibility apart from an unknown animal.

Although the object was certainly animate, Raynor was willing to concede that it may have been waterbirds or an otter.

Apparently now Dick Raynor plumps for waterbirds. Do make up your minds!