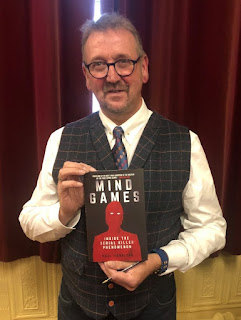 A Review of an Interesting Book 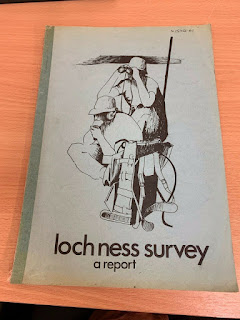 I thought I had just about all the Loch Ness Monster books listed on my booklist, but then I discovered another one recently. It is more an A4 booklet running to just under 60 pages and it describes an expedition to the loch by the senior school pupils of Blackdown High School in Leamington Spa back in 1971 and 1972.

One may assume this would be a publication more worthy of juvenile books that I generally avoid and not even list, but this book is a delight, well researched and written and, as you can see from the table of contents below, has its own highlights. In fact, the book begins with a foreword by none other than influential author, Constance Whyte. She offered a lot of help to the pupils in their research into the topic. Her foreword does not say much that Nessie researchers do not already know, but her anti-scientist stance (not anti-science stance) included a hope that these bright young things would augur a better future for Loch Ness Monster research. 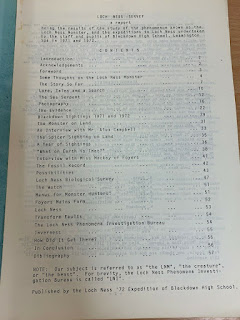 That was over-optimistic in hindsight, but let me go over some of the nuggets I found whilst digging into this snapshot of Loch Ness research in the early 70s. Most of the notable researchers of the time were talked to or got a mention. That list includes Ted Holiday, Alex Campbell, Frank Searle, Tim Dinsdale and so on.

Obviously, Frank Searle has been exposed since then, but he comes across as being helpful to the kids including giving them a copy of his first "monster" photograph from October 1971 and a sketch of a tail he claimed he have seen on August 8th 1971. Now I am not actually sure I have seen this photo before. I included most of his photos in my most recent book, but not this one, so I include it here for readers' interest, though the quality of the reproduction is not great. 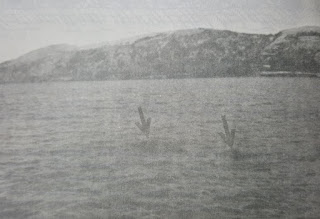 What was most interesting was their interview with monster aficionado, Alex Campbell, at his cottage in Fort Augustus. A few interesting points came out of that chat. As usual, he recounted his only sighting of a head, neck and humps in Borlum Bay back in 1933, but what I was always unsure of was his father's experiences, as he was the previous water bailiff.

This was clarified when he said his father had also seen the creature multiple times and had warned him as a kid not to go into the loch due to the water horses that resided there. However, what caught my attention the most was that Alex Campbell "expressed some doubts about land sightings". That surprised me as one might assume that those who believe there is a monster in the loch would tend to accept the possibility of it coming ashore.

Moving on, all the classic black and white photographs are discussed except for one - Peter O'Connor. In fact, it is not even discussed in dubious terms, I presume it was the only photo dismissed by the LNIB and others when the school kids were discussing evidence. The survey of sightings show some sketches done for the kids. This includes the classic Gregory Brussey neck sightings but also a sketch supplied by Ted Holiday of his August 26th 1968 hump sighting (which I believe was his penultimate sighting). 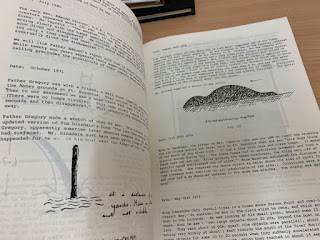 To my own interest, I found some sightings which were not on my own list of eyewitness reports, though it is not clear whether these have appeared elsewhere in the literature. These are a head and neck sighting by a Mrs. Scott of Foyers in November 1969 seen from a bus on the way to Inverfarigaig which stopped to see the 4-5ft neck approach to within 200 yards of the observers.

Another "new" sighting was actually two reports from a Miss Mackay of Foyers. Her first encounter with the beast was in 1955 as she was cycling to work at about 7am. Assuming an awful noise of splashing was a boat, she looked at the loch to see a big black hump in mid-loch. It had the classic upturned boat appearance only to submerge and reappear as a "big black heap" whereupon a second submergence led to a final re-appearance which now included a very small head on a long neck. The sighting lasted 10 to 15 minutes with the creature moving at a fast pace.

She had a less spectacular second sighting years later and also commented that her father had seen a whale like creature in the loch and she knew of the old tales of the monster from her childhood. As it turns out, the school group had two sightings of their own on June 22nd 1971 and July 2nd 1972. The first was seen in Foyers Bay, being a hump seen at the centre of a pool of ripples, though it was at 600 yards in rain for ten seconds.

The second a year later from the same spot involved a four foot long dark object moving at speed from the Foyers Bay towards the Hydro-Electric plant. It moved 80-100 yards in 13 seconds to give an average speed of 14 mph. In a sobering lesson in monster hunting, no photos or film were taken (some equipment being lent by the LNIB).

So, plenty of excitement for our young hunters, and by way of example of those days, the school had access to the LNIB records of accepted sightings and they randomly took 1968 as their year and from this they tabulate 15 sightings, Of which six were single hump sightings, four double humps, two of three humps, one was two pairs of humps  and two involving a head-neck (one of which was a hump-head-neck).

When the media talks about a record 11 sightings this year, the quantity is comparable to 1968 but the quality is well short. So, the school's report hearkens back to a time when activity was high at the loch and so it seems was the monster itself. At some point, I will scan all the pages in allowing all to study this document from 47 years ago.

As an interesting appendix, Frank Searle mentions helping out the school in his unpublished work, "Loch Ness Investigation". However, he is not very complimentary of a teacher from the group whom he accuses, amongst other things, of passing information onto ex-LNIB members. The teacher himself later accused Frank Searle of plagiarising a chapter from this very school report in his 1976 book, "Nessie, Seven Years in Search of the Monster". To Searle's chagrin, his publishers settled with the teacher and let Searle's book lapse out of print. Never a dull moment with Frank!