George Spicer and his Car 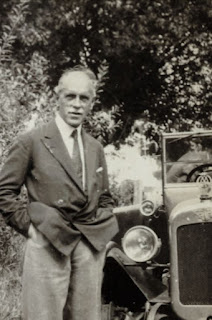 Undoubtedly, the George Spicer account is one of the most significant eyewitness stories to come out of Loch Ness. One a hot summer day in July 1933, George and his wife claimed to have seen a lumbering grey creature over twenty feet long cross the road in front of them before disappearing into the loch. I have covered this seminal story several times on this blog with the main article published here.

Though it was not the first report of the Nessie era, it was certainly the one that catalyzed national and international interest in the Loch Ness Monster. After all, this was not just distant hump in the middle of the loch, but something that could break out in front of you on the road! The controversy has continued to this day, was it something akin to a prehistoric monster or something more mundane, such as a line of otters or a huddle of deer as some have averred?

With this in mind, I was contacted recently by one of George Spicer's grandsons, Nigel Spicer. As it turns out, he is one of three brothers and one of them will be appearing on an upcoming documentary to discuss what their grandfather and grandmother saw 89 years before. I think this documentary is the one to be shown on Channel 5 and which our own Malcolm Robinson, author of the "The Monsters of Loch Ness", took part. We look forward to seeing this when it comes out.

But in the meantime, one of the brothers sent me the above photograph of George Spicer with his car. The first question is whether this was the car he was in on that day alongside Loch Ness? The answer is most likely yes. The account related in Rupert T. Gould's book starts in this way:

They were motoring round Loch Ness in their [open] 12-h.p. Austin, having been as far as John o' Groats and back via Inverness.

A look around for a picture of an open top Austin 12 gives us the example picture below. 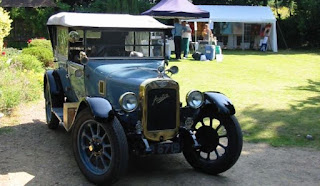 A comparison with the photograph at the top satisfies me that this was likely the car driven down the loch on that day in 1933. This naturally leads us to the next question which is whether this photo of George Spicer and his car was taken at Loch Ness? After all, people were most likely to take pictures on holidays back then. Would it be too much to ask it was taken at the actual location of the sighting? Probably, yes.

But that would be a picture with powerful connotations, but, alas, the information in the image is not enough to be conclusive on the matter. The top of the car is off, suggesting a sunny day like that at Loch Ness and there are trees or bushes around again suggestive of countryside. But then again it could have been taken a year later three hundred miles away, so who knows? In general, Nigel had this to say about the sighting:

The grandparents (my father’s parents) 1933 sighting has long been of great interest to myself as well as to my two older brothers ... We have all visited Adrian Shine. The only childhood memory we have is one of my brothers sitting on grandmother’s lap as a little boy and her telling him about the sighting. He can remember little of it now but has long been convinced that his grandmother would not lie to a little boy sitting on her lap!

Our biggest regret is that we didn’t really discuss it much with our parents when we were older (parents died several years ago) but I do remember my mother saying that they (as her parents in law) were straight and honest people in her view. She also used to say it was a great pity that that year (1933) my father did not accompany his parents on the Scottish holiday (as he had done in previous years) because he was quick witted as a young man in his early twenties and often had his camera with him. How things might have been different if he had been there too!

We can be certain (unlike one noted sceptic, Ronald Binns) that no lying or deception was involved with the Spicers. Explanations have been proferred and positions have been taken. I know where I stand and I look forward to the tale being recounted on the next Nessie documentary.