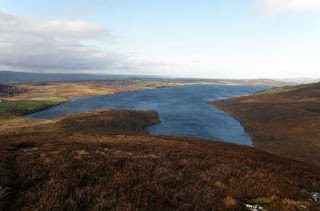 Charles St. John in his 1846 book "Short sketches of the wild sports and natural history of the Highlands" had an interesting experience on Loch Ness:


"I was crossing Loch Ness alone one evening with my rod at the stern of the boat, with my trolling-tackle on it trailing behind. Suddenly it was seized by a large trout, and before I could do anything but take hold of my rod he had run out eighty yards of line, and bent my stiff trolling-rod like a willow, carrying half the rod under water. The loch was too deep for me, and he snapped the line in an instant, the rod and the twenty yards of line which remained jerking back into the air, and sending the water in a shower of spray around. Comparing the strength of this fish with that of others which I have killed when trolling, he must have been a perfect water-monster. Indeed I have little doubt that the immense depths of Loch Ness contain trout as large, if not larger, than are to be found in any other loch in Scotland."

Now I don't fish and I doubt Mr. St. John actually saw the brute he got a hold of if it had already spun out 80 yards of line in seconds. Note that if our intrepid angler had taken five seconds between hearing the line turn and grabbing it, then 80 yards in 5 seconds is an average speed of more than 30 miles per hour.

Clearly he was impressed enough with its strength and speed to class it as something beyond an ordinary trout - in fact he calls it a "water-monster" in Loch Ness!

Perhaps some anglers could enlighten me as to the strength required of a freshwater fish to treat a fishing line like this one. Pretty big would seem to be the answer ...