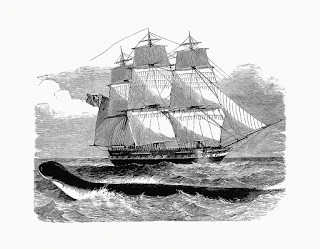 There is a report doing the rounds in the media just now that is being hyped along the lines of  "Study suggests Loch Ness monster was mass delusion triggered by discovery of dinosaurs". So ran the headline of the Daily Telegraph as it spoke to Charles Paxton who co-authored a paper on sea serpent sightings and parallel discoveries of marine megafauna fossils.

The actual paper is entitled " Did nineteenth century marine vertebrate fossil discoveries influence sea serpent reports?" and is published in the latest Earth Sciences History Journal. Charles Paxton says a bit about it on his university's website. I recall being at a talk on this subject given by Charles last year in Edinburgh but defer any critique of this paper - mainly because I do not have it and regard myself as no expert in sea serpent reports.

But let us just put things right here and say that this study has essentially little or nothing to do with the Loch Ness Monster. Back in the 19th century when various monster fossils were being unearthed, the Monster was a local story confined to the Highlands and camouflaged with the veneer of the Water Horse and Kelpie culture.

Now cryptozoologists' view of the media can be a love-hate thing. They continue to publish sightings, videos and photos (though a lot are at best inconclusive). That is good and generally keeps the monster in the limelight. But when they get a hold of stuff like this, they have an almost obsessive urge to link any aquatic monster story to the Loch Ness Monster.

The simple reason is that Nessie is clickbait, sea serpents are far less so. So you have to take the rough with the smooth and hope people who actually read it see the inconsistency between headline and paper. 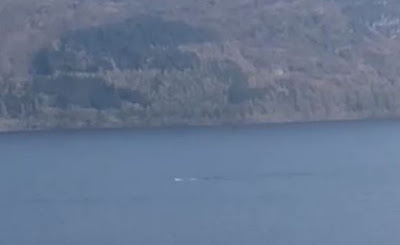 The videos and photos are beginning to come in as human activity increases around the loch, be it tourists or those servicing the local and tourist economy. The Scottish Sun relates this event that happened on Thursday 11th April.


AN INVERNESS man has spotted the Loch Ness Monster "going at speed" across the famous loch - fifty years after his grandad's own sighting. Rory Cameron, 36, spied the strange movement in the water last week after visiting his pal nearby. And his video footage has stumped everyone who's taken a look. He said:

"I was coming from a friend's house near the top of the loch last week when I saw something in the water. It was going at some speed, I've never seen anything like it before in my life. I've lived in the area for 20 years and I've driven on the A82 every day of that time. I've never spotted anything like this. And nobody can work out what it is, it's really strange."

Rory, who's MD of Cobbs Bakery in Drumnadrochit, isn't the first member of his family to have an encounter with the elusive Nessie. He revealed that his grandad, who was a member of the police, saw something in the 1960s. He said:

"You know, I do believe there's something out there. My grandad spotted something back in 1962 I think it was. He couldn't identify what it was back then and I'm the same now. My clip isn't like a lot of sightings, this thing was really moving fast. And it looks tiny too, compared to some of the boats on the loch. It was definitely going somewhere".


So runs the story and one may feel inclined to look and move on as the subject is not exactly close at hand. The witness was up in the hills near Drumnadrochit, so the map below gives a rough range. Where he was exactly is not clear, but he was up in the hills overlooking the bay outside of Drumnadrochit, so I would guesstimate the apex of the triangle below. One line points to Urquhart Castle which is seen to the right in the video and the object is at the end of the second line near mid-loch. 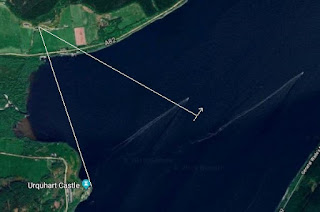 Looking at the video, a horizontal line can be drawn from the object to the castle area which suggests the object and castle are both roughly the same distance from the observer, which I place at just over a mile away. Clearly, at that distance, not much in the way of detail can be ascertained or ever produce a game changing image. But because the castle is in the video, we can use it as a ruler to make some estimates since its dimensions are known.

The height of the castle keep is about fifty feet and from this we can calculate the width of the tower to be about thirty feet. From the still from the video below, we note an area of disturbance comprising two main areas which cover a distance of about sixty feet based on the castle in the picture. Each area of "white water" disturbance are at least fifteen feet in extent.

We can further make some estimates regarding the speed of the object from the various stills. By noting the change in distance between the object(s) and a fixed point (the castle) between frames, the speed relative to the observer can be made. So, firstly, the two frames below were captured at 5.0 and 7.0 seconds on the Sun video (obviously with no break in between). Based on the change in distance in that time, the object(s) were travelling at an average speed of 15 feet per second or just over 10mph.

Applying the same approach to the two stills below captured at 13.0 and 19.0 seconds, the speed has dropped dramatically to two feet per second or under 1.5mph. Note the white blob by the castle which is a boat and by its movement, it is heading in the same direction as the the object(s) but is markedly different to the object of interest.

What might these metrics say about the object under discussion? One theory might be that these are two or more birds chasing each other as they run and flap along the surface of the water. I can see such a group dropping from 10mph to 1.5mph but I am not sure about them creating areas of disturbance at least 15 feet in extent. A group may do this and as they subside to float on the surface, this may appear as a "submergence" if they are not discernible at a mile away. One would really need to see a known disturbance made by birds to compare and contrast to make an informed decision.

From this I am pretty sure it is not a wave formation, but again the object(s) is too far away to be sure absolutely what it is but at least on this occasion we have a "ruler" to make some measurements to help.