Tim Dinsdale and the Oxbridge Students 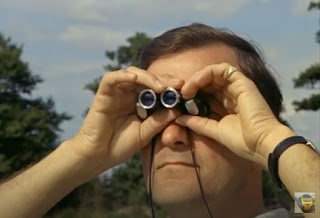 Fellow Nessie fan, Gary, sent me a Youtube link to an old newsreel item entitled "Look at Life" which the Rank Organisation churned out for British cinemas in the 1960s. This one was called "Out for a Catch" and featured the man himself, Tim Dinsdale. The video is below and though it mainly is concerned with British angling, for some reason it begins and ends at Loch Ness.

The scene opens with Tim surveying the loch from his deckchair at a spot I think is on Foyers beach, beside the small island on the right I have before dubbed "Dinsdale Island". During the mid-1960s, Tim used this river inlet as a base of operation for a while, setting up a hide for observation. This is all downhill from where he took his famous film in April 1960. As you can see, he uses those small binoculars he was well known for as he looks for a sight of his quarry, the Loch Ness Monster. 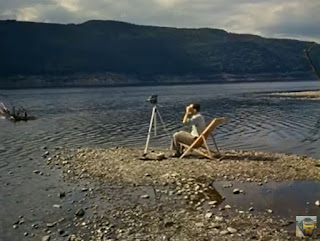 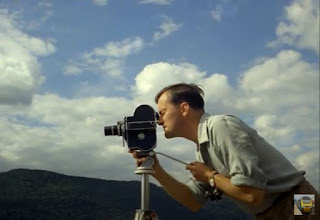 The scene switches to Tim helping out a group of young people, examining a map of sightings and pointing this way and that as they also survey the loch. The narrator tells us they are Cambridge University students and that pretty much sums up these short segments. The question is when was this film footage shot? A look at the Wikipedia entry for "Look at Life" says this particular reel was shot in 1960, so who were these university students? 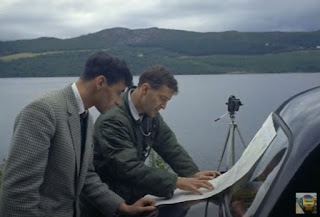 The answer is they were one of the first expeditions to the loch in the frenetic era that spanned 1960 to 1980. A search of the newspaper archives gives us more details. For example, the clipping below from the Birmingham Post dated 12th July 1960, tells us they were a group of students from Britain's top two universities, Oxford and Cambridge on a camera surveillance trip led by Dr. Richard Tucker, formerly of the British Museum.

Interestingly, two weeks later, the Sunday Pictoral for the 24th July offers more information by stating that they had been there the past month and they numbered more than a dozen students. However, they are stated as being led by twenty three year old Peter Baker and not Richard Tucker. The only theme this lightweight article can focus on is the menace of the biting midges. Now I wondered who this Richard Tucker was who was formerly of the British Museum? 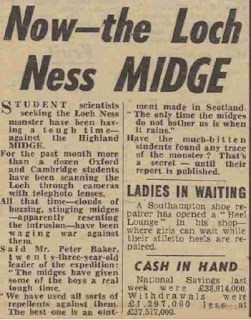 There is the controversial Dr. Denys Tucker who was sacked around this time for declaring his belief in the monster after seeing a hump moving across the loch during a visit. This led to his sacking by the Natural History Museum (though the alternate explanation was his eccentric behaviour). But then again it could more credibly be Dr. Dennis Tucker, another zoologist from the Natural History Museum, who did sonar work at the loch in the 1960s. Or is there a third Tucker called Richard? It is all a bit confusing and readers are invited to offer an explanation as to who Richard Tucker may or may not be.

What is not confusing is the fact that this newsreel was filmed only two or three months after Tim Dinsdale shot his hump film. One could argue this is the earliest footage of a young looking Tim Dinsdale and is an important part of the record of the Loch Ness hunt (I think he was forty years old).

That year was a busy one as another former employee of the Natural History Museum was there in June. His name was Maurice Burton who was on the cusp of becoming a Loch Ness Monster sceptic and would head south to his home in England to write the first sceptical book on the monster. It was titled "The Elusive Monster" and was published the following year as Tim published his very pro-Nessie book, "Loch Ness Monster".

This was all a prelude to the formation of the Loch Ness Phenomena Investigation Bureau which would mount annual expeditions to the loch from 1962 and for the next ten years. An era which is receding in the rear view mirror as its participants pass away and we look to more complex techniques to finally solve this mystery.