Sceptics and the Fordyce Case

Some further thoughts came out of the Fordyce land sighting article I submitted recently. This was prompted by some comments on this blog and elsewhere that suggested Mr.Fordyce saw nothing more than a horse crossing the road. But before we proceed any further and to erase any doubts in your minds, here is a picture of a horse crossing a road. 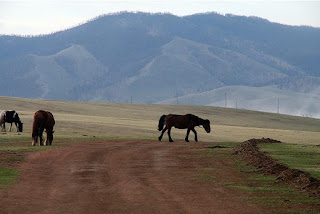 Unmistakable, really. It's a horse, what more needs to be said? Well, it is put to us that Fordyce saw a horse and so we must examine this proposition. The first question that naturally arises is how two witnesses (Mr. Fordyce and his fiancee) could mistake such a well known animal for any other than what it was? The answer is that they should not. I mentioned previously that I have seen deer as I drove through the same location and there was no doubt about what I saw - common deer. I expect if Fordyce did see a horse then the probabilities will dictate he would recognise it as such and we would have never heard from the man to this day.

I would not even class such a proposition as a species of the critical thinking that sceptics claim to have the upper hand in. I say this for the simple reason that such a proposition is useless without a reason. The proposer must explain the reason why he or she thinks the witness mistook a horse for something completely freakish. In other words, the burden of proof lies with the proposer.

Until then, the proposition is nothing more than guesswork and should not be taken seriously. After all, if the proposer is not serious about explaining his theory, neither should we be serious about receiving it.

Now I am not suggesting that we must de facto accept that Mr. Fordyce saw an outlandish creature, but one often gets the impression with sceptics that any old suggestion will do because it is always going to be more probable than the idea that whatever the witness saw was a monster.

This is not critical thinking and is more a form of the logical fallacy of petitio principii or "begging the question".  In other words, the premise and conclusion are wrapped into one package and presented as a solution. In reality, it is a process which has the end event of the conclusion ("he saw a horse") but what the prior reasoning may be lies behind a thick fog - if it is there at all.

So each proposed explanation must stand or fall on its own merits and not be judged in relation to other explanations. This should be the target reasoning of the "sceptics" but sometimes it is no better than the reasoning of some "believers".

I'll leave the last word to the horse. The BBC and some other outlets are talking about some old tales of Mhorag as found in the works of the Highland writer, Alexander Carmichael. As it turns out, these have been in the public domain for over a year and I did an analysis of them in this article back then.

Another interesting piece from the Carmichael blog is relevant to Loch Ness but not necessarily to the Loch Ness Monster. From this article, we have this quote about the famous prophet, the Brahan Seer:

One typical tale, noted down on 3 January 1872, from an unnamed reciter in Gramsdale, Benbecula, tells of how the seer came by his powers of prophecy and then how he eventually threw this stone into Loch Ness. It is said that when this stone is eventually rediscovered that all his prophecies will come true.

The actual Carmichael text says this:

He then got a box and in the box a stone and in the stone all the prophecy. He kept the stone and as long as he kept it he [kept] prophesying. He threw from himself the stone in a lake at near Lochness. When this lake is drained the stone will be found and then many things will come to light.

This suggests the stone may actually be in a loch beside Loch Ness rather than in Loch Ness itself. However, there are quite a few small lochs in the area. Another link suggests that the next person to find the stone will have two navels! I don't have two navels, so it doesn't look like I will be the winner. However, better it is a smaller satellite loch than Loch Ness when it comes to the task of draining.

I would guess that some lochs have been drained or at least had their water levels reduced as various engineering projects have been performed across the Highlands since the 19th century. Loch Ness itself has had a few hydro-electric projects at Foyers, Glendoe and I think on the opposite side up from the Altsigh Burn, though whether any lochs were substantially affected by any such projects is another question.

However, having identified potential historic lochs, the next problem would be more challenging, how do you find a certain small stone out of thousands and how do you know it is the prophet's stone? The one clue we have is that it had a hole through its centre. That's all you've got to go on and to make matters worse, the loch in question probably hasn't been drained!

They've looked for the Ark of the Covenant, the Holy Grail and El Dorado. Perhaps a hunt around Loch Ness for the Seer's stone would make for a pleasant diversion from monster hunting.