Harper Smith and his Periscope Nessie

Some time back, I wrote on that curious subset of monster reports that are likened to poles or periscopes. I had listed 17 eyewitness accounts or about 1% of the entire sightings database and 8% of all head-neck reports, but one eyewitness account was missing from that list which I include today. It was a report known from the literature but it came to my attention a while back when perusing old copies of the Scottish Field magazine. The sighting was by a Mr. J. Harper Smith on June 27th 1951 as he and his son fished off Tor Point. I reproduce his letter to the magazine below:


SIR, - On Wednesday, June 27th, I arranged to fish Loch Ness with my son, who is an officer stationed at Fort George. It rained heavily in the morning, and was still drizzling steadily when we set out after lunch for Dores, which is two miles down the Loch. We took a boat from Dores Inn and fished till 9 p.m. About that time we were taking our rods down in the boat about 300-400yds. off Dores Point. The weather had improved steadily and it was quite fine and visibility was good, but there was a flat calm which was useless for fishing.

My son suddenly said that he thought he could see a periscope off a headland about a mile further down the Loch, and on the opposite side from Dores. We both watched it carefully, and saw something coming up out of the Loch. After a few moments it clearly became a large black head with a considerable length of neck below it.

No body could be seen, but the object, immediately began to move forward towards the centre of the Loch at a great speed. We estimated the speed as similar to that of the average lake steamer (say 12 knots), and there was a great wash behind it. It went roughly as far as the centre of the Loch and then turned and headed straight towards us. We decided that if it came within about half a mile we would pull into the shore. It came to what we judged to be about that distance, but just as we were preparing to bend to the oars it turned round and went back in the reverse direction. Having covered about the same distance in that direction it then did a great sweeping circle (the centre of the loch being the centre of the circle) and finally moved off towards Whitefield Point, where it submerged.

We watched it with amazement for well over 15 mins. We were both agreed that it bore no resemblance to any creature known to exist today, but that it was very similar to some of the prehistoric monsters depicted for example in Conan Doyle's The Lost World. The size of the head (bearing in mind our distance from it), its speed, and the size of the wash all clearly indicated an enormous creature. Until then I was more than sceptical of the existence of " the monster," but I now know it exists. I hope to resume the hunt for it on some future occasion with a cine camera, which 1 unfortunately left behind this time because of the rain. For the same reason I even left my binoculars.

As it turned out, this periscope sighting was hiding in plain sight in Nicholas Witchell's "The Loch Ness Story" and I had just forgotten all about it. This is the account from the first edition of the book:

We went over to the village of Dores to enquire about hiring a boat. After arranging this we had a chat with the old lady who runs the Dores Inn. I asked her if the locals believed in the 'Monster'. She looked at me very seriously and said: 'It isn't a question of believing in it — most of us have seen it at one time or another and we know it is there.' Unfortunately (for me) I still remained sceptical. The next afternoon we went out fishing but because it was wet when we set out I left my cine camera and binoculars behind.

By about 9 p.m. the loch was like a mirror. We were just starting to take down our rods when my son pointed with his arm and said: 'Is that a periscope over there?' I looked and realised something was coming up out of the water. Within a few seconds a black head was followed by a similar coloured neck several feet long. While we were eagerly looking for the body the head and neck began moving forward at a very fast speed followed by a huge wash.

As it came nearer we noticed some oscillations of the head and neck. We began to edge in nearer the shore but when it had come to within about 800 yards 'it' turned and went back up the centre of the loch and shortly afterwards submerged. We put the length of the neck at about five feet and the diameter at about a foot . . .


Here is my map of the event based on these two reports. The witnesses were located at the star symbol while the creature went from A to E in its various motions. One gets the impression the creature was heading across the loch but took a temporary diversion north to see what the boat was before resuming its original route. Of course, there is no way of ascertaining the truth of that speculation. 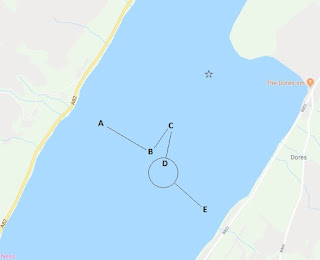 Needless to say, this kind of motion is hardly reminiscent of water birds which are known to inhabit the loch. Rapidly swimming across nearly a mile of loch at about 14 miles per hour does not remind me of any such bird. Going round in a circle before heading in a straight line again is also curious and makes one wonder if it had spotted something edible within that circle? As an aside, I note that the creature submerged very close to the point where Lachlan Stuart would take his famous three humped photograph only seventeen days later.

Sadly, there is no sketch to accompany this report as one feels this sighting occupies the ground of pole like but also classic head and neck as Mr. Smith goes from "periscope" to "large black head". Was this a result of a change in the creature's shape as we also read the statement "we noticed some oscillations of the head and neck" in the Witchell account. If that is an accurate observation, are we seeing a very malleable head and neck, if they be head and neck at all?

Or was the creature initially seen with its head looking away from the observers only then to turn perpendicular to their line of sight? Could this change in perspective account for some of those sightings which are solely periscopal in nature and thus harmonise them with the classic long necked reports?

Watching the creature at a mile away is not exactly close up but when it came to within 800 yards of the boat, we are beginning to talk about a more meaningful event. Which naturally brings us to the reliability of the witnesses. I like stories which involve anglers as witnesses as I regard them as a better trained class of observer. Was Mr. Harper Smith a seasoned Loch Ness angler who would therefore be someone familiar with the so called deceptive nature of the loch and its various aspects?

The answer would appear to be "no" as he signs off his letter as coming from Bracebridge Heath, near Lincoln in England. That of course does not make him an incompetent witness as his angling skills may nevertheless have been honed elsewhere. So the best we can assume is that he probably had some competence gained as an angler, but the degree of it is not known. His son, who was from nearby Fort George, is a different matter. It is possible he was a regular angler on Loch Ness and in fact his son was first to spot the creature. Again, there is no way of knowing.

It should be added that the creature was in view for at least 15 minutes which allows plenty of time for normal candidates such as logs, birds and boats to be considered and eliminated from their on the spot enquiries and we have two eyewitnesses assessing what was before them. Ultimately, you either believe they saw a large five foot neck with a large head speeding across the loch or you believe they somehow misinterpreted what they saw or even lied. The choice, as ever, is yours.