I was in the library going over some old newspapers from the 1940s and followed up a reference to a sighting made over 120 years ago. The reference was made in The Encyclopaedia of the Loch Ness Monster by Paul Harrison who in turn refers to the Inverness Courier for the 16th January 1948.

It concerns a letter mentioned in the Courier from a man called H. J. Craig who was then living in  Western Australia. At the time of writing, Mr. Craig was probably around 70 years of age and recounted a tale when he was a boy fishing with his brother in a rowing boat near Urquhart Castle. The original clipping is reproduced below for your reading (click on each image to enlarge). 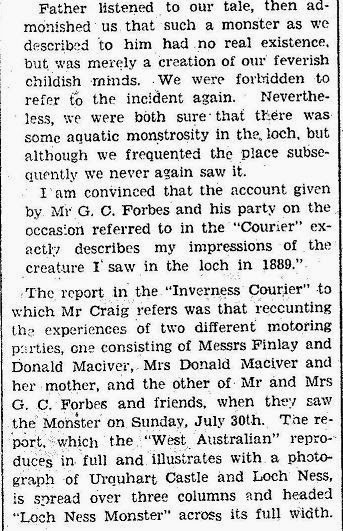 The original letter was published in the West Australian of 27th September 1947 and had been prompted by a recent sighting of the creature by two separate motoring parties, the Forbes and Macivers (published in the Inverness Courier on the 1st August 1947). A thumbnail of that Australian article is shown below with a picture of Urquhart Castle and a model of the ubiquitous plesiosaur. 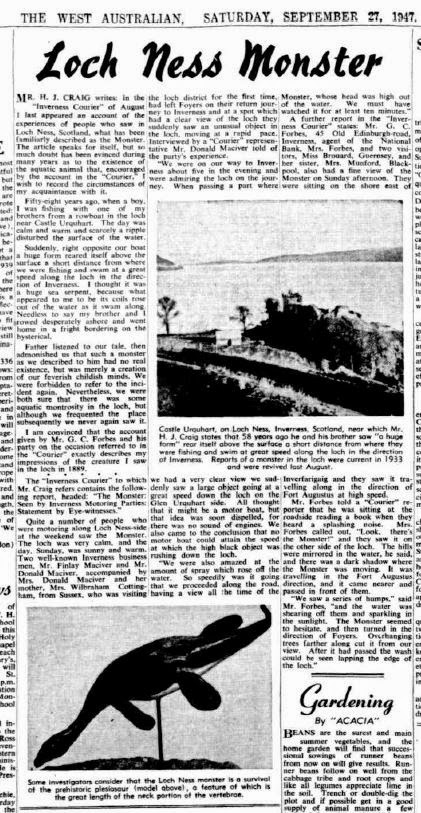 What prompted Mr. Craig to write was how the witnesses had described seeing this dark object with multiple humps and a head cutting through the water at great speed in a manner similar to that day in 1889. Donald Maciver had described how "amazed they were at the amount of spray which rose off the water" as they kept pace with it in their car near Foyers. The whole affair lasted about ten minutes and the idea of a motor boat was dismissed due to the lack of noise and the certainty that no boat could attain that speed (presumably they were thinking of one of the normal boats and not a John Cobb type affair). Needless to say, there were no motor boats racing down Loch Ness in 1889.

Meanwhile, the Forbes were sitting by the shore east of Inverfarigaig when  they heard a splash and saw the creature heading south at speed. In similar words to the Macivers, Mr. Forbes saw "the water shearing off them (the humps) and sparkling in the sunlight". I am quite certain the two parties were witness to the same event on the loch.

At this point, I will intercept one sceptical comment that they merely saw a string of merganser birds or similar flapping hastily along the surface. However, to demonstrate the power of what they had seen, the "wash could be seen lapping the edge of the loch".  Moreover, the witnesses compared the object against the buses on the far side of the loch and concluded it was of a similar size. Those birds sure grow to some hefty sizes on Loch Ness.

But fifty eight years before a similar display of unsettling power sent a couple of Victorian boys speedily rowing for shore. Amazing what a hold simple birds had over local folk even before Nessie became a mania. I hope you being to see the inadequacy of such an avian explanation. Others may not, but they have no choice if they do not believe any large animal inhabits Loch Ness.

Well, that is not quite true, they could always default to calling all these people just mentioned liars. But any explanation which "sucks less" than the monster one is not necessarily an explanation either. Better to say nothing at all in those circumstances.

Finally, and in a manner similar to the Dinsdale hump, our monster seems to take pleasure in swimming in a most inefficient way by ploughing through the water. By what manner of propulsion this is achieved is a bit of a mystery since we have no monster to examine.

Such raw displays of dissipative power are rare and they have to be else the Loch Ness Monster would exhaust itself in short measure. For sure, no laws of physics are being broken in such an act  for submarines do this all the time when they travel at speed on the surface with a sizable portion of their bulk above water. But one wonders what motivates the monster to undertake this more difficult movement? Is it a defensive tactic against another Nessie? A courtship display to prove one's fitness to reproduce or just chasing fish?

For sure, animals will expend energy in often seemingly useless ways. I am still undecided whether this motion was flipper based or something akin to a squid's propulsion technique. Who knows, but between 1889 and 1947, it seems our favourite creature had not lost any of its natural force.