It's Saint Andrew's Day in Scotland today and Google have acknowledged this with a montage on a Scottish theme. It came as no surprise that the Loch Ness Monster put in an appearance in this representation of the nation. It was probably unintentional on Google's part, but I note the monster lies halfway between a known animal, the stag and a mythical one, the unicorn.

Symbolically, that is where Nessie lies in the great debate concerning its existence. Some regard it as real as the deer whilst others regard it as mythical as Scotland's national animal, the unicorn. And there I suspect it will continue to lie for years to come!

A Scottish Sea Serpent from 1635 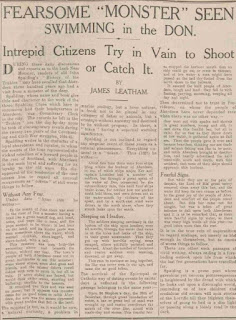 I picked up this interesting article from the Aberdeen Press and Journal, dated 20th December 1933. The Loch Ness Monster was rising in media coverage, doubtless bolstered by the recent publication of the first photograph of it - the Hugh Gray photo. I quote the relevant portion here:

DURING those daily discussions and reports as to the Loch Ness Monster, readers of old John Spalding's "History of the Troubles" may have recalled that Aberdeen three hundred years ago had a visit from a monster of the deep.

Spalding, whose name and book give title and character to the work of the three Spalding Clubs which have in succession had their headquarters in Aberdeen, was Commissary Clerk in the city. The records he left in the " Troubles" are the day-by-day notes he took of contemporary events during the twenty-two years of the Covenanting and Civil War struggles,. 1624-45.

Spalding writes in the character of a loyal churchman and royalist, to whom the events of the time represented the wicked rebellion of a froward people in the rest of Scotland, with Aberdeen in the main loyal and suffering for its loyalty to the old ways. His disapproval of the tendencies of the time causes him to regard all unusual occurrences as "tokens" of still worse things to follow.

"In the month of June there was seen in the river of Don a monster having a head like a great mastiff dog, and hand, arms, and paps like a man, and the paps seemed to be white: it had hair on the head, and its hinder parts was seen sometimes above the water, which seemed clubbish, short-legged, and short-footed, with a tail.

This monster was seen body-like swimming above and beneath the bridge, without any fear. The town's people of both Aberdeens, came out in great multitudes to see this monster: some threw stones, some shot guns and pistols, and the salmon fishers rowed cables with nets to catch it, but all in vain. It never sinked nor feared, but would duck under water, snorting and bullering, terrible to the hearers.

It remained two days and was seen no more; but it appears this monster came for no good token to noble Aberdeen, for sore was the same oppressed with great troubles that fell in the land."

The monster is not, as it would be now, a natural curiosity, a problem in  marine zoology, but a "lusus naturae", a freak not to be placed in any category of fishes or animals, but a creature without ancestry and destined to be without progeny. In short, a "token" having a supernatural warning significance.

As to what this creature may have been is a matter of conjecture and doubtless varied opinions. Dolphins and the occasional stranded whale would have presumably been familiar animals to those on the east coast of Scotland, though the non-flipper like description of the limbs does suggest it belonged to another species.

Perhaps a walrus, you say, or the now extinct Steller's sea cow or perhaps the legendary sea serpent, a creature distinct from those classified to date by science? The mention of bellowing does suggest an air breather though. Describing the head as being like that of a mastiff dog begs the question as to what a 17th century Mastiff dog looked like. This engraving from the 16th century gives some idea as to how the head of this creature was perceived. 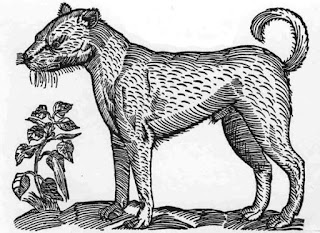 One aspect that does dovetail with the Loch Ness Monster, or should I say the Loch Ness Water Horse, was the attitude that the appearance of such unidentifiable creatures were a bad omen or "a token having a supernatural warning significance". As has been discussed on this blog before, appearances of the Water Horse that inhabited Loch Ness were often events that were hushed up or rarely spoken of lest this tempted a bad outcome.

Certainly, such an attitude was a subtext to the initial reports of the monster in 1933 as older folk spoke of the supernatural aspects of the entity once held in dread by locals. These attitudes probably peaked at some point prior to the Industrial Revolution of the early 19th century and was certainly noted in the literature of the time as on the way out by the end of that century.

By 1933, it would appear only the older locals would have remembered these traditions. Refer to the Cameron-MacGruer land sighting of 1919 where the children "had been warned not to go near the loch by our grandparents as there were these wild horses in the loch". The story of the Loch Ness Monster has now moved from the supernatural to the biological ... or has it?