It's a busy weekend at Loch Ness, on top of the annual RockNess music festival which is guaranteed to keep our noise sensitive Nessie firmly underwater, a possibly unique event will come to pass as the Olympic Torch traverses the Great Glen (map from bbc.co.uk below).

As some may know, the torch has been going up Britain carried by the great and the good, the famous and not so famous people of these isles. The torch is scheduled to arrive at the southern end of Loch Ness just after 4pm and then proceed up the A82 and then cross the loch to the music festival.

A good time for Nessie to surface with all those professional newscaster cameras around, but I wouldn't hold out too much hope! More details here.

POSTSCRIPT: Looks like the old "Loch Ness Hoodoo" of stuck cameras afflicted the BBC as their live webfeed of the road journey disappeared somewhere north of Invermoriston and did not come back till they were beyond Loch Ness and heading into Inverness! 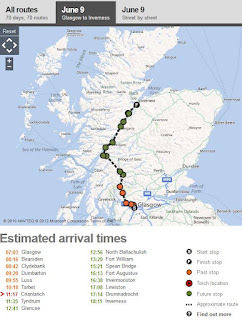 Having had the trail cameras out and about at various times and locations, I thought I would put up a gallery of some of the more interesting images. Note if the Loch Ness Monster is in any of them, I can't see it! You can click on each image for more detail.

First we have a pleasant day at Loch Ness with some people out on a fishing excursion. 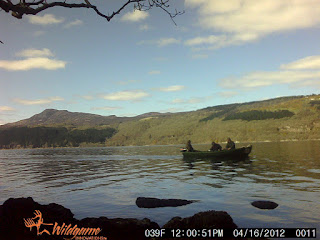 However, Highland weather can be quite temperamental as this next shot shows. Not quite great Nessie spotting weather. 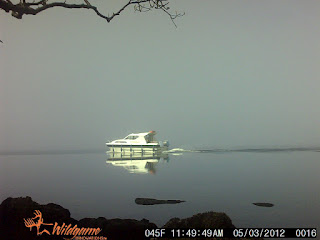 The next picture is one I was hoping wouldn't happen but then again, I am half glad it did. Someone had found my trail camera but clearly they left it else I would not be showing you these pictures! So I thank the person for their honesty but clearly I will have to find a more covert location. I though it was well embedded and out of the way from tourists but then again, those boats I just showed could possibly notice it from afar and come back later to investigate. 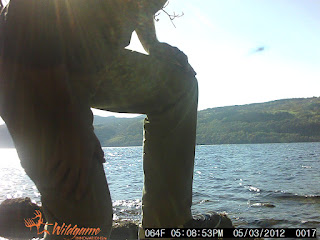 As is usual the loch stirs itself and begins to attack the shoreline. 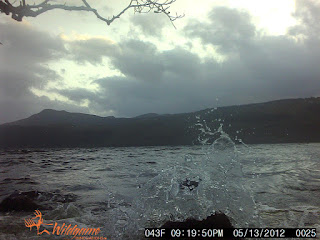 The sky begins to darken and the loch becomes more unsettled and harder to interpret. Is that a long hump at the centre left or just a wave? 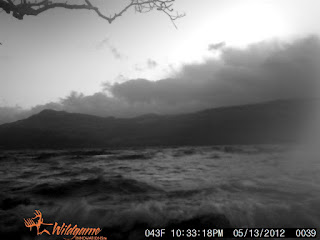 The next camera I put on the roadside for one night just to see what happened as darkness descended. As it turned out a UFO (Unidentified Furry Object) came into view at midnight. I must admit I have no idea what it is. Perhaps a fox or rabbit? Too small and furry for Nessie, that's for sure. 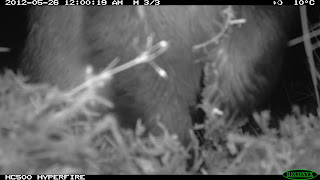 I then moved the camera to a spot just north of Fort Augustus. 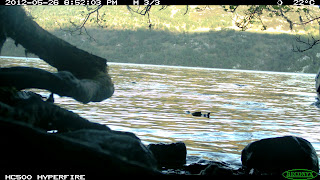 Things got interesting when this critter turned up at 10:36pm. 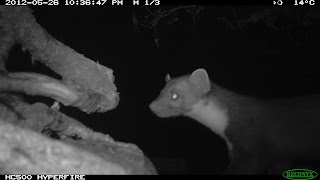 "What was that little red light I just saw?" 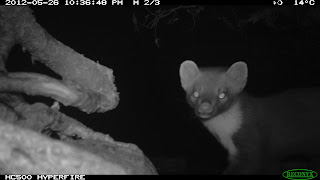 "I think I better investigate this ...." 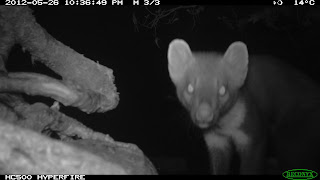 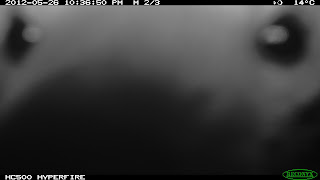 I was wondering what this "UFO" was. A ferret, polecat, weasel? Actually, I think it might have been a Pine Marten which is itself not a common creature. It seems our Loch Ness animals are pretty aware of these devices, which I don't mind so long as they don't sit in front of them all night! 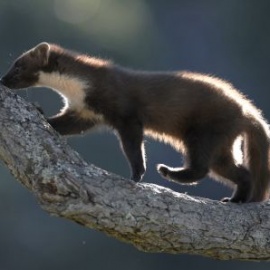 More pictures as and when interesting things pass in front of them!